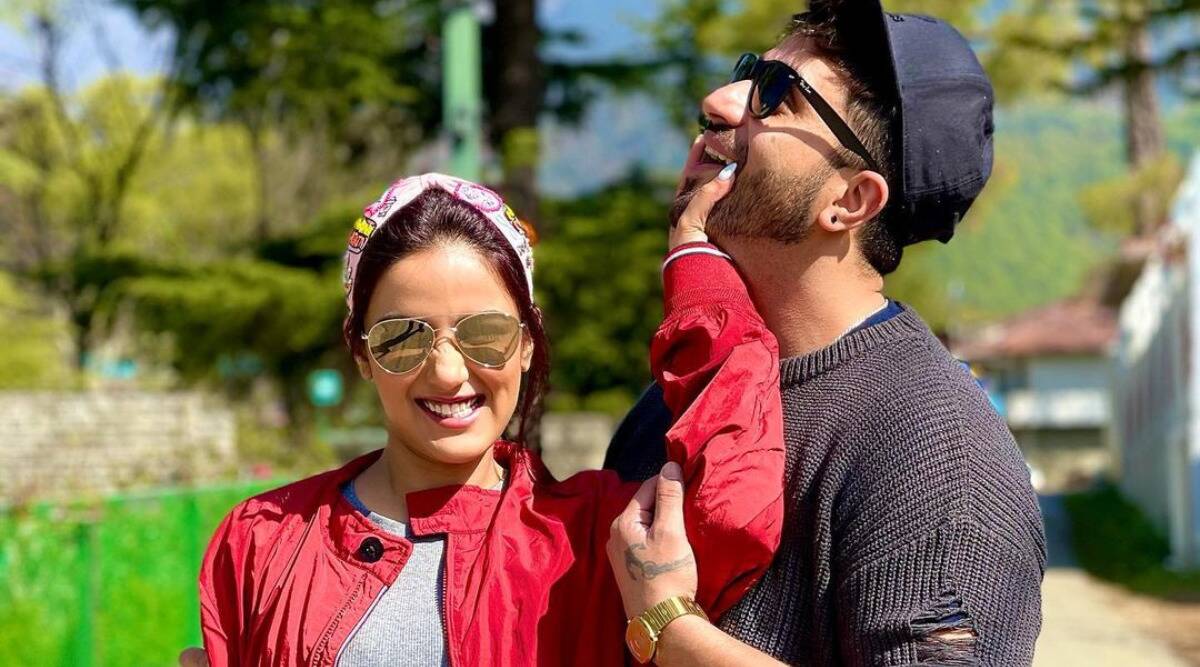 Friends-turned-lovers Aly Goni and Jasmin Bhasin are all set for the release of their first music video. “Tera Suit” by Tony Kakkar is going to be a party number and will drop on Monday. Ahead of its launch, the couple sat down together for a live chat with their fans last night. While it was all fun, Jasmin pulled a fast one when she claimed Aly came ‘zabardasti’ to Bigg Boss 14 after her.

In the video, Aly and Jasmin started by telling fans how they appreciate their love. The duo stated that given it’s their first project together as actors, they would need their support more this time. Jasmin went on to share that their earlier collaboration was coincidental. They met on Khatron Ke Khiladi 9, and then luckily got cast together in Khatron Ke Khiladi- Made in India. “Aur Bigg Boss mein toh yeh zabardasti mere piche aagaya tha (He came to Bigg Boss forcibly after me),” laughed the Tashan-E-Ishq actor.

As Aly looked shocked at the claim, she hugged him and said she was joking. The couple then shared how the song is a fun party number. Aly even said that given they two are in a happy place, they wanted to do a project that could spread the same positivity among fans. The Yeh Hai Mohabbatein actor also asked fans to share their reviews and videos on their song.

Towards the end of the video, as Jasmin claimed that she is looking chubby, like a loving boyfriend Aly dismissed it, adding that his camera is faulty, leaving her blushing.

While there were rumours of the two dating, Aly Goni and Jasmin Bhasin have been thick friends after they met during Khatron Ke Khiladi. Before they stepped into the Bigg Boss 14 house, they maintained that there was nothing beyond friendship between them. Jasmin was a contestant from the start, while Aly entered the reality show midway, after he saw his bestie breaking down after a fight with co-housemate Rahul Vaidya. While he went in to support Jasmin, given his affable personality, he managed to reach the finale, while she soon got evicted after getting least votes by audience. However their stint together helped them realise their love for each other, which they professed on national television.

After the show, both Jasmin and Aly spoke to indianexpress.com about finding love in each other. Sharing that it was beautiful to fall in love with your best friend, Jasmin said, “It’s not like one fine day we woke up thinking we were in love. It has always been there but we never accepted it. We always had a mutual understanding to not complicate things between us or risk our friendship. However, when we were apart, emotions overpowered all logic. We decided to stop living in denial and accept our feelings. And now it’s just beautiful.”

On the other hand, Aly mentioned, ” We realised it was love after a long time in the house, and it was amazing. I am so happy that we both realised that it was love, and it has made our friendship even more special. I think you cannot look out for love and happiness, it just comes to you when the time is right.

Jasmin and Aly’s “Tera Suit” will drop today at 11 am.