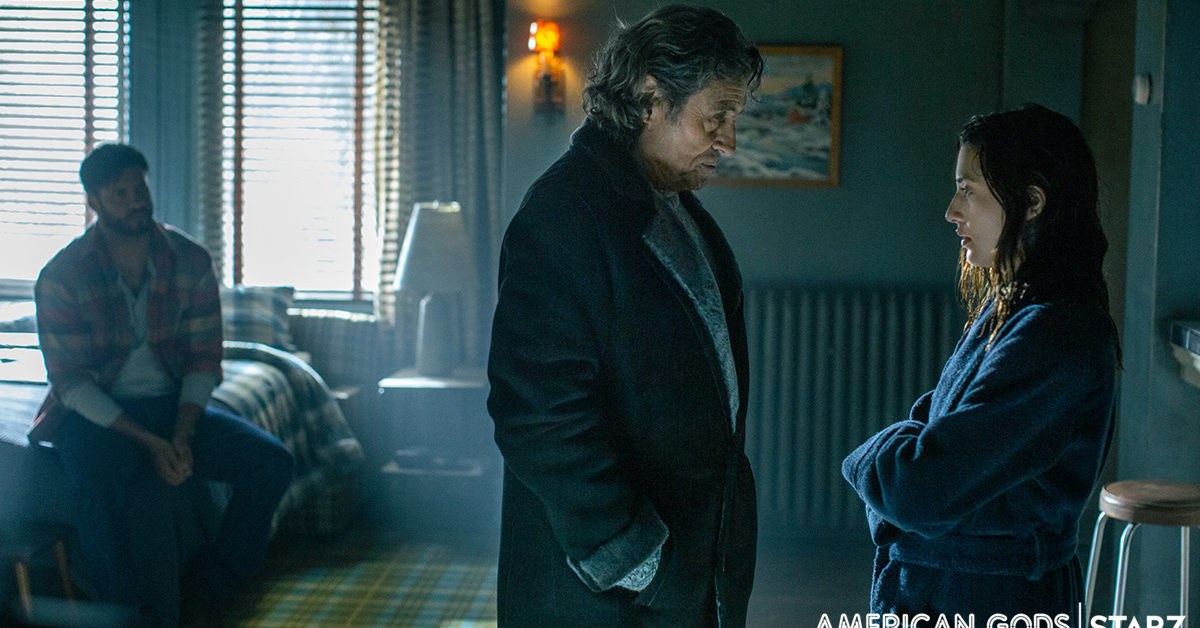 Welcome back to our weekly preview for the third season of STARZ’s American Gods, as our various storylines begin to converge- and from the looks of things, some very uncomfortable truths are close to being exposed. Heading into the next chapter to the cable network’s adaptation of Neil Gaiman‘s novel, Shadow (Ricky Whittle) and Marguerite (Lela Loren) grow closer as “Mike Ainsel” begins looking at Lakeside as home. Until things begin to get a little… curious. Meanwhile, Laura (Emily Browning) and Salim (Omid Abtahi) have an impromptu meeting with Danny Trejo‘s World about a certain common enemy they share: Wednesday (Ian McShane). Add into the mix Bilquis (Yetide Badaki) and Tech Boy (Bruce Langley) continuing down their respective paths of self-discovery, and it’s easy to see why “Fire and Ice” isn’t exactly going to be a “quiet episode

Now here’s a look at a preview for this weekend’s episode, with Marguerite teaching Shadow how to ice skate (in a scene that feels like the calm before a heartbreaking storm)- followed by an overview of “Fire and Ice” along with the official promo:

Even with all that ice, my heart is melting. Watch a new episode of #AmericanGods tomorrow on @STARZ. pic.twitter.com/8BkTUnkhXg

American Gods Season 3, Episode 7 “Fire and Ice”: Shadow and Marguerite’s bond strengthens while he exposes an unexpected truth regarding a recent nearby crime spree; Wednesday stumbles upon a startling discovery of his own; Laura and Salim hope to strike a deal with an enemy’s enemy. Directed by Rachel Goldberg, with teleplay by Anne Kenney and David Paul Francis.

Now here’s a look at what viewers can expect to come during the third season of STARZ’s American Gods:

“American Gods” is the epic story of an inevitable war building between the Old Gods of mythology and our New Gods of technology. Whittle stars as ex-con Shadow Moon, a man pulled into the service of the mysterious Mr. Wednesday, played by Ian McShane (“Deadwood”, John Wick) — only to discover that not only is his charismatic but un-trustable boss actually the Norse All-Father god Odin, he’s also…Shadow’s father.

In Season Three, Shadow angrily pushes this apparent destiny away and settles in the idyllic snowy town of Lakeside, Wisconsin — to make his own path, guided by the gods of his Black ancestors, the Orishas. But he’ll soon discover that this town’s still waters run deep, and dark, and bloody, and that you don’t get to simply reject being a god. The only choice — and a choice you have to make — is what kind of god you’re going to be.

Back to Top
Close Add post
X
Riverdale Season 5: Trailer, Plot And Photos Of Episode 7 Of The Youth Series – Crossover 99…TVThe CW released this week the sixth episode of the fifth season of the youth drama Riverdale, being consistent so far since the current season hit the…

X
Bollywood plans a big comeback with sequelsTVMUMBAI: Bollywood might have had a slow run last year with lockdown prompting total closure of cinema halls through most of 2020, but the industry sur…
close