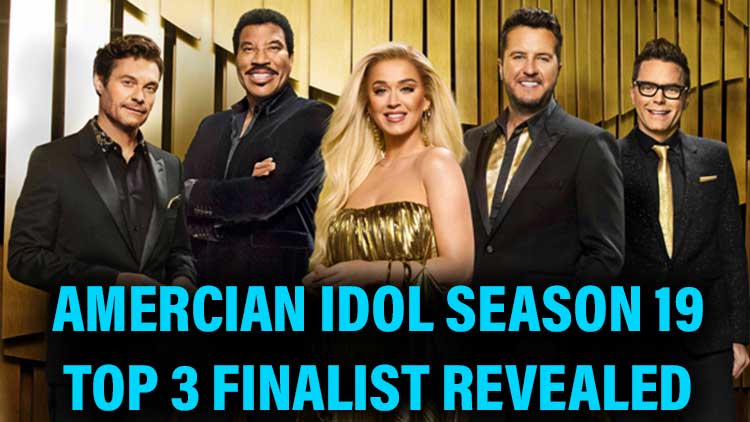 American Idol season 19 was once again airing with the top 5 finalist episode last Sunday. But due to the surprising exit of Caleb Kennedy from the show, the competition was held among the top 4 contestants, Casey Bishop, Chayce Beckham, Grace Kinstler and Willie Spence.

All the top 4 finalists were mentored by a guest Finneas who is an award-winning songwriter, producer and artist. In addition, he made a group of two contestants included Willie Spence and Grace Kinstler as a duet who performed on his “What They’ll Say About Us” while Chayce Beckham and Casey Bishop as another duet performed on his song “Break My Heart Again.”

Each of the top 4 finalists has performed a song from their personal Idol, a duet song by Finneas, a song that was the debut of their new, recorded winner’s single and then a song they sang earlier in the competition.

“You were born on American Idol.” Katy said. He is real and everything he gives  real feels through his performances, added Like. Lionel also praised him about his voice and the artist who he is.

Song – “Wish You Were Gay” by Billie Eilish

Luke said it was his best performance with the perfect choice of song. “You now own your persona”, said Lionel. Katy told him, “Whether you win American Idol or not, you are going to be your next hero.”

Lionel was happy for her sound and confidence. Katy compared her with a bona fide megastar ‘Kelly Clarkson’. “Your voice is Pro”, Luke said.

Katy felt a spiritual experience through his performance. “You are literally going to save people’s lives with your voice”, a compliment given by judge Luke.

For their first single :

Luke loved the way he worked some of the production on his original and the confidence he has. Chayce turned into a complete transformation and stepped into his light, according to judge Lionel. “Apple valley boy, forklift boy, you are a star”, Katy said.

Song – “Love Me, Leave Me” by Casey Bishop and “Live Wire” by Mötley Crüe

After the performance of Casey, now this song “Love Me, Leave Me” has become Katy’s favourite. “Wow! What was that?” Lionel exclaimed for her “Live Wire” performance.

Song – “Love someone” by Grace Kinstler and “Father” by Demi Lovato.

Luke said, it was another great performance from her. Lionel now confirmed that Grace has followed all the instructions that made her more artistry, full of star power with a bright future. Katy said it was a beautiful performance. ” What a great way to pick a great song,for your first song”, Katy praised.

Lionel said, “You are a giant of a voice and a giant of a presence and you handle it so well. Katy gets chilled through Willie’s every performance. Katy said, He is walking in the light.

The Top 3 finalists are:

Who will be the winner of American Idol 2021?