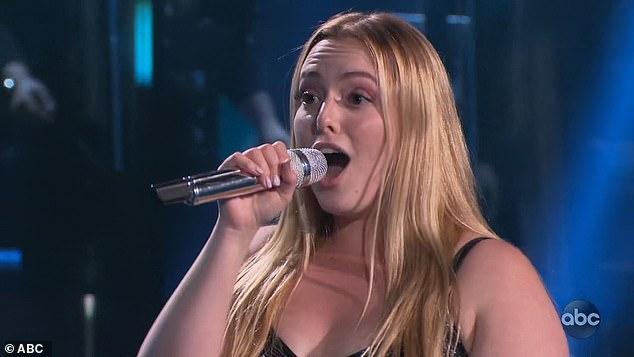 All the 16 contestants have performed their best last week. Out of 16 contestants, who are in the top 12 list? And whose American Idol journey came to an end?

Let’s find out who stepped in the American Idol 2021 top 12 stages.

Alyssa performed the song “Killing Me Softly”. Her energy level was so good and her performance was like a ‘star performance ‘. “You were actually an artist in my eyes for the first time today “, Katy said.

Graham delivered the song Frank Sinatra’s “That’s Life “. He has a “timeless voice “, Luke praised. “You had the swag, you had the attitude but I’m loving the fact that you are enjoying this ride “, Lionel said.

Alanis sang “The Story” by Brandi Carlile. “We just witnessed a star exploding on the American Idol stage “, Lionel said.

Willie performed Adele’s “Set Fire to the Rain “. He got a standing ovation from all three judges. The performance was brilliant. “What we just saw was God took control of you because there is no possible way you thought about this “, Lionel praised. “Every note was thoughtful. The moment you looked at the camera, the moment that you stepped away from the mic, You were possessed in a Godly way “, Katy said.

He gave his best performance to date, Luke praised and added “watching your growth is what’s so inspiring for us as judges, because that’s why we sit in these chairs, and you put it all together .”

Cassandra performed Chris Isaak’s “Wicked Games”.She got a standing ovation from all the judges. Judges encouraged her to have a little more confidence because she is on something big. “There’s ‘American Idol ‘ and then there’s life after ‘American Idol ‘ and I think you’re gonna ace both”, Katy said.

Caleb sang Chris Stapleton’s “Midnight Train to Memphis.”He got a standing ovation. His performance was great. “To be 16”, and to be able to stick to your guts on what you are and to not be manipulated by everything going around, that’s very hard for 16 years old to do “, Luke said.

Colin delivered the song “Everybody Wants to Rule the World ” by Tears for Fears. ” It’s called show business. You got comfortable, and let us do that, you were having the time of your life on this stage. That is a winning combination. ” Lionel said.

Casey performed on the song “Black Hole sun ” she got a standing ovation. Her performance was phenomenal and Impressive. The way she sings, Lionel loves her presentation. “You are dangerous and I like it, ” Katy said. She can sing everything she Wants to, Luke praised.

Madison performed “Gravity” by Sara Bareille. She is an incredibly serious side of being an artist, a musician, a vocalist and the performance was the best, she has ever sounded, Katy praised. Lionel praised her for giving a perfect presentation.

Bean performed on Thirdstory’s “Searching for a Feeling.” “Awesome to see all these shades of Beane,” Katy said. “Understand that people falling in love with you is the game. You want them to know you like what you are doing right now ” Lionel praised.

Hunter delivers the song Bon Iver’s “Skinny Love.” Judges praised him for his incredible voice. Luke said, “No one sounds anything like you in the world.” and Lionel complimented him as an ‘instant identity ‘ for his amazing voice.

Ava performed Anne Marie’s “2002” This song is one of the most phenomenal classics ever had and Ava performed incredibly, all judges are very proud of her. “I am going to declare you 15 and dangerous “, Lionel said.

Chyace performed Bob Marley’s “Waiting in Vain” He gave an incredible and confident performance. It’s not about glitz and glamour, Chayce is just a real guy and America has fallen in love with him, Lionel said. Katy says Chayce “checks all the boxes ” and Luke wants an email on how to be cool.

Wyatt sang “Use Somebody ” by King of Leon. “you are gonna be able to do music for the rest of your life,” Luke said. “You have a style on stage that we like to watch and to watch you take this song and make it your own, you are on your way to something big”, Lionel said.