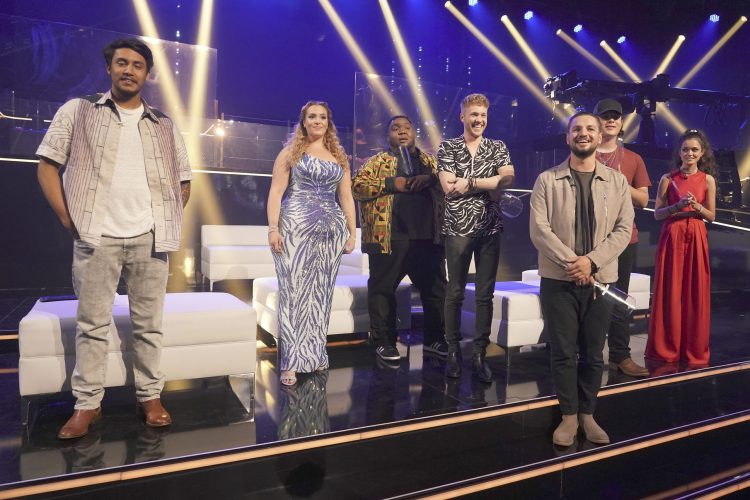 American Idol returned on “Disney Night “ with the band on Sunday, 2 May. All the singers have performed their best to get the spot in the top 7 in front of all the three judges Lionel Richie, Katy Perry and Luke Bryan including host Ryan Seacrest and Bobby Bones as an in-house mentor.

Arthur Gunn is the winner from the season 18 comeback episode which was announced at the start of the show. It means season 19 top 10 American Idol contestants list was completed.

On the Idol stage the Descendant’s Sofiya Carson performed “A Whole New World ” with all the contestants. And also Oscar winner Jon Batiste performed “It’s Alright ” the classic song covered in the animated Disney movie, ”Soul”.

Now all the top 10 performances with their result are here.

Caleb Kennedy  :  Caleb’s Disney song was  ” Real Gone ” from  “Cars “. He became so emotional after meeting his mom at Disney World. John tried to encourage him to look at the judges and audience without the hat so that it will boost him for future achievements. Caleb with his ‘ brave hat ‘ gave one of his best performances. His song choice was perfect. Katy said, “this thing is really Peter panning out for you! “. Luke called him “a total Caleb the artist look.” Lionel loves his personality and said that he “actually gave us a smile.”

Willie Spence  :  Willie sang a Disney song,  “Circle of Life” from  “The Lion King”. Willie is attached to Disneyland with some of his happy memories with his beloved late grandfather. At the age of 5 or 6, he had spent some precious time with his grandfather at Disney World. He recently passed away. Willie is surprised by his family and spent some happy moments with them. John loves his smile.

As usual, this time also he stole the whole Idol stage, the performance was unique and incredible. Luke said to him, he has magic.  “You could sing the phone book and literally make it your own. ” Lionel said. Katy praised, “You aren’t a lost boy anymore, you’re  a bona-fide Idol.”

Deshawn Goncalves  :  “When You Wish Upon A Star ”  from  “Pinocchio” was Deshawn’s  Disney song. It was his first trip to Disney World. John encouraged him to sing out with his soul purpose. Deshawn put his own, unique and magical spin on his classical song and delivered an incredible performance. Lionel asked him, “who are you really! ” as he loves Deshawn’s  ‘showmanship’. Katy said, “you are amazing.” She felt, she met him a very first time. Luke said, “You are not the same person who showed up at the audition.” Really, he has been growing into an incredible singer.

Casey Bishop  :  The Disney song of Casey was “When She Loved Me ” from  “Toy Story 2”.  About Casey, John said,  “She has a couple of sweet spots, and she has to get to them soon.” She is surprised by her step-dad and brother. Casey’s breathtaking emotional vocals touch all the

hearts. Katy loves all the colors of her which is showing on the stage and also complemented that she can do almost anything. Luke called her 15 year old  a “Superstar in the making ” Lionel said of her, she has grace beyond her years and also praised that stage performance, voice and  delivery it’s something that a singer should have naturally and Casey demonstrated that she got those qualities.

Chayce Beckham  :  “Baby Mine ” from  “Dumbo” – a Disney song that Chayce sang. Chayce calls John an “Uncle Jessy.” There were no family members at Disney World for Chayce but they were seen along with Graham  Defranco on zoom,  cheering for Chayce. As usual, he was awesome and delivered the song in his super-cool style. His performance was “retro cool”, said Luke. Lionel was encouraged to enjoy the moments. He needs little faith, trust and pixie dust, added Katy.

Alyssa Wray  :   Alyssa performed on the Disney song,  “A Dream is a Wish Your Heart Makes ”  from  “Cinderella”. John wants to use that part of Alyssa to support his  Disney+ show. Funny but good deal John. Alyssa gave her beautiful rendition of this classic Disney song. She delivered the magic on the stage. “A work of art”, Luke called to her performance. Katy complimented, “You are a permanent princess.” and praised her control. Lionel said, “an amazing performance. “

Result – Alyssa is in eliminated.

Arthur Gunn  :  Arthur’s Disney song was “Remember Me” from  “Coco”. He has never seen the movie. John suggested he watch the movie before the performance so that he can deliver the song with more power and strong emotions into it. But he ignored John’s advice. Katy said it was one of the best performances ever and compared him to Dave Matthews. Lionel encouraged him to sing a song and make it yours that represents who you are!

Cassandra Coleman : Cassandra sang a Disney song – “Go the Distance” from “Hercules”. John gave her the title of “natural performer”. She was surprised by her sister and brother in law at Disney World. In this performance also she had succeeded to deliver her passion. Luke called her ‘most solid vocal’ from top to bottom. It was an unbelievably great performance, Lionel praised her. Katy said, “I loved that you leaned into the theme. I think your voice and your confidence have grown from zero to hero.

Hunter Metts : “You’ll Be In My Heart” from “Tarzan” was the Disney song of Hunter. His song choice was his mom’s favourite. He was surprised by his family at Disney World and the scenario was so emotional. His performance was delivered warm-heartedly just like him. All the judges were so happy to see him all smiling. Luke called his voice “recognizable”.

Grace Kinstler : Grace sang “Into The Unknown” – a Disney song. She felt that the song is about taking risks but John encouraged her and said, “Just do that”. The result of John’s advice was so powerful, Grace got a standing ovation. “You had the whole room controlled by your voice” Katy praised. Luke said, “You had the eye of the tiger and you went beyond all of that”.