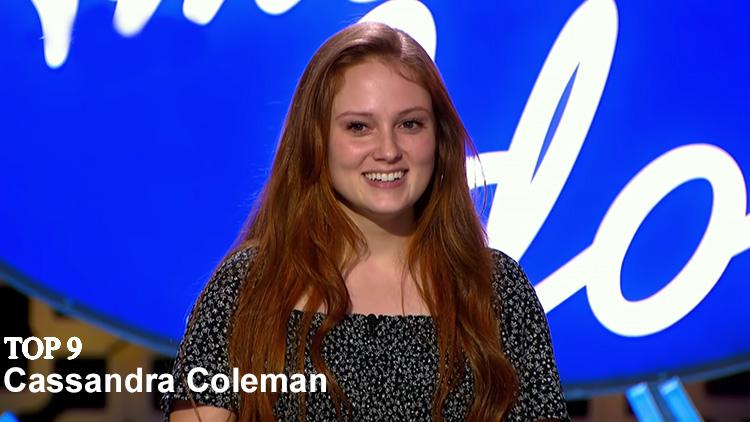 Judge Luke Bryan has returned who was tested positive for the covid -19. Sunday night was started with the Lionel singing “Say You, Say Me”, his Oscar winning song from ‘White Nights’. Now Let’s find out the top 9 contestants.

Grace sang “Happy” from Despicable Me 2.”  Her performance was with right energy on the stage. She has done great justice to the song. Judges pointed out that she has to select songs that portrays who she wants to be as an artist.

Ava performed “City of Stars” from “La La Land.” The song choice was perfect for her. Luke complimented that she is 15 years old but has elegance far beyond her age. “You have actually managed to do at your age, which is you appear as if you are doing this for whole, full 74 years old life “, Lionel praised. Katy liked the performance but demanded her to work on the stage a little more.

Caleb sang “On the Road Again” from “Honeysuckle Rose”. His performance was an incredible. “You Keep this up, you will be on the road for a very long time “, said by Lionel.  Luke said him, he didn’t oversing and also added, it was his best from top to bottom performance. Katy also praised him that he deliver the great job.

Hunter deliver the song “Falling Slowly” from the movie ‘Once”. Unfortunately he forgot some lyrics at the end and he dissolved into tears. All the judges tried to console and comfort him. Infact, judges called him It was his best performance despite the flub.

Result Hunter is in the top 9.

Madison sang “Run to You” from  “The Bodyguard “.

Her performance was great. Katy said, “‘A – level performance, you look like an Icon” and also added, “Go for a favorite and you play the favorite “.

Chyce performed “(Everything I Do) I Do it for You” from “Robin Hood”. Chayce gave a great vocal performance. “The first half of the song I thought ‘you have to let go’ ,

but at the second half of the song ‘you found yourself ‘,said Lionel. Katy said that he delivered the song in authentic way.  Luke called him ‘ front runner ‘.

“(I’ve Had) The Time of My Life ” from “Dirty Dancing”. It was a good performance and Bean is ready to go on tour right now, Katy said.

Alyssa delivered the song “This is Me” from “The Greatest Showman”. She gave a stunning performance. Lionel called her “subtle force”. When the guns go off it’s quite haste but the fact you held it and you were subtle in your moment when you finally delivered, we were cheering. “said Lionel.

Deshawn performed the tittle song from “The Way We Were.” His performance was great. Luke called it ‘absolutely beautiful’ and also added ‘classic’ and ‘classy’ performance. Deshawn got overwhelmed.

Casey attained the song “Over the Rainbow” from “The Wizard of Oz.” Katy called her ‘early front- runner’ and she can sing anything she want.  She is handling pressure of this competition at such 16 year old age that is appreciable, Lionel said.

Cassandra performed “Writing’s on the Wall” from “Spectre.” She gave an incredible performance. “It’s the cry, you bring us in your poised, your positioning on stage and you know what you are doing “, Lionel said. Katy said, “Never forgot you are not what the world thinks of you, you are what you think of you”.

Result – Cassandra is in the top 9.

Willie delivered the song “Stand Up” from “Harriet. “Willie’s performance felt ‘a religious experience ‘ for Lionel Richie. Katy thanks him for taking his emotions and filling it in this song. Luke felt that don’t use the word ‘front runner ‘ until the whole show is done.

American Idol season 19 winner – Chayce Beckham and his journey on the Idol...