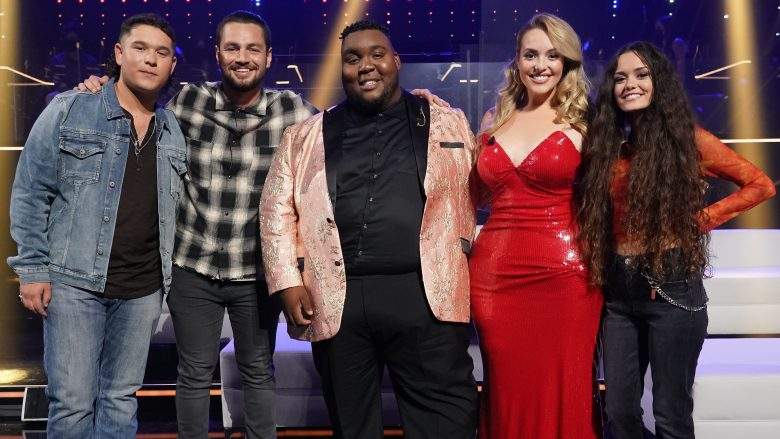 For the Coldplay song, the Coldplay singer Chris Martin served as the mentor to the top 7 finalists. All the contestants were trying their best to get the spot in the top 5. For Mother’s Day Song, all the contestants have shown their deep-hearted emotions for moms through their performances which were so heart touching and incredible.

Let’s check out all the performances with the judges opinion and their results based on votes.

Chris, as a mentor, suggested to Casey about staying in the moment and believing that she has a ‘ perfect singing gift ‘,before the performance. Casey once again delivered a jaw-dropping performance.

Katy was happy to see a growth in her energy and also wanted to see her move around like a little tornado. Luke has been noticing, Casey never delivers a bad note and this is a glimpse of her bright future. “your performance was fantastic “, Lionel said.

Chayce and Chris were flocking together all the time. Chris advised Chayce to pull down a sexy bang from his slick-backed hair, but it didn’t look like that’s happening. His Coldplay song delivered magic. He always put his own, unique effectiveness on the song.

“Every time you perform, it feels like there is so much artistic signature”,Luke said. Lionel also praised that he has a ‘signature voice’. Katy thought, he put his own twist on the song.

Chayce wrote an original song which he dedicated to his mom. Chayce has made judge Lionel cry on his song. “As a songwriter, I am going to say, put that song out now, it was performed perfectly,” Lionel commented. Katy said, “sensitive, vulnerable, heavy machinery operator, A+ A+ A+.” Luke said, the right song on the right night.

Chris suggested Willie to strip things down because he can sing up to the mark so he doesn’t need much help. Willie just followed his advice and impressed all the judges with his breathtaking performance, as he sounded to the next level.

Lionel was so excited and said, “I am just going to sit at home and watch this.” Katy believes that Chris was humble

enough to say, “Let it be willie’s song.”

Mother’s Day Song – “You Are So Beautiful” by Joe Cocker.

This performance of Willie was the best of the night. Katy said she has never heard that song sung like this performance and it was straight from the heart. Luke believes that his voice has so many amazing qualities “I was there when Billy Preston wrote it and Joe Cocker sang it, You Willie-ized it.” said Lionel.

Chris told Caleb to never take credit for writing any song because they are gifts from the above. He thinks Caleb could be a superstar country artist.

Caleb’s Coldplay song performance scared Katy. She said, “It scared me in a good way.” First 20 seconds of his performance, Luke felt that Caleb was ready to overthrow the galaxy of music! and said “Don’t ever tell yourself you are not a singer. You are a singer.” Lionel said that Caleb’s confidence dipped half way through the performance and told him to note that viewers don’t come to rehearsal.

Caleb’s performance was unique and radio-hit. Luke said that being 15 years old but wrote the song as a 50 years old wise man which is so appreciable and amazing. “I think you’re wearing heart on the sleeve looks really good on you ” , felt Katy.

Coldplay Song – “In My Place “

Arthur wanted to do some changes in the original song, Chris encouraged Arthur’s changes to rework his song and thought it’s a brave move for Arthur.

He walked to the beat of his own guns that changed the melody to the song and this is natural talent he has, Luke said. “You are a cherished soul in my book”, Lionel praised.

Arthur delivered a hot performance on Mother’s Day. “You are a stylist. Your voice is a signature to who you are. That was a great performance”, Lionel praised. “Arthur Gunn is Arthur Gunn “, said Katy.

Mother’s Day Song – “When we are young”, by Adele.

Katy was so proud of her and said, “You have really stepped up your game.” Lionel was appreciated for the perfect performance and delivery that was right on point. Luke said, It was a magical look, like being in a movie.

Chris encouraged Hunter to up the key on this song and felt that he is a true talent. Hunter delivered his usual smooth vocals, emotions and passion through his performance.

Katy was happy at seeing him that he got his baby confidence. Luke praised the uniqueness of his voice. Lionel also said him, he is a storyteller as well as has a unique voice.

Hunter performed his original song for his Mom. He delivered a breathtaking performance. Luke praised that it was a musical experience done by a pro. Lionel told him he should be very proud as he drifted to pro status. “All the original songs will be the driver in the seat of your career”, Katy said.

The Top 5 American Idol Contestants Are:

X
F.R.I.E.N.D.S Reunion on 27th May let’s Revisit some Iconic Moments from t…ListsThe much-awaited and eagerly-anticipated 'F.R.I.E.N.D.S' reunion is coming to HBO Max on 27th May. The show which first aired in 1994 ran for 10 seaso…
close