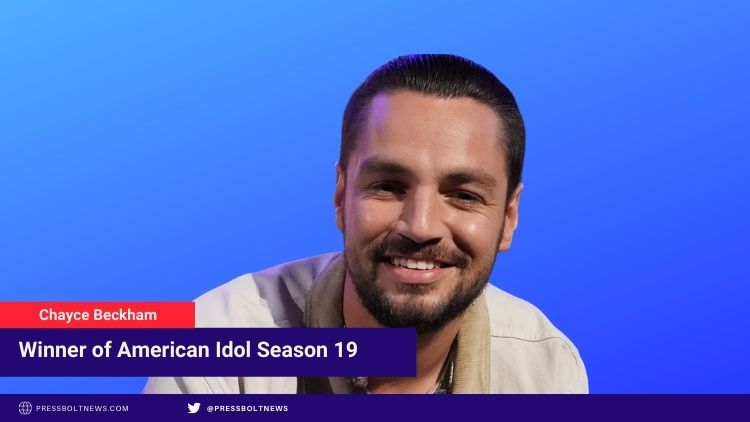 Super-cool, Chayce Beckham became the winner of American Idol 2021. The incredible singer was born in 1997. He is 24 years old. Chayce is a singer as well as a songwriter from Apple Valley California. His mother is Windie Clifton – Petersen and his stepdad is Terry Petersen. The coolest singer has two sisters, Tiffani Beckham and Madison Beckham.

There is no information about his love relationship. Chayce, 5 ft 9 in tall singer started a Band which is formed by four music lover friends known as ‘Sinking sailors’

1) Journey to American Idol audition round

Chayce auditioned in Los Angeles. He performed “What Brings Life Also Kills” by Kolton Moore and The Clever Few. Chayce had impressed all the judges and got the entry to the next Hollywood Duet round.

2) Journey to the Hollywood Duet round

Chayce was paired with Christina Daugherty (she was one of the contestant of American Idol) as a duet partner. They performed “Jully”, by Noah Cyrus ft. Leon Bridges. Chayce with Christina had delivered a heartfelt performance. Judge Luke had said that Chayce could be in the top 10 and Luke Bryan was right!

3) Journey to the Showstopper round (top 24)

Chayce sang “You Should Probably Leave”, by Chris Stapleton. Judges had Known that Chayce Beckham has incredible potential and he can do much better as his Showstopper’s performance was not up to the mark.

Chayce’s solo song was “Afterglow” by Ed Sheeran to which he got a standing ovation from the judges.His Duet song was “Drive” by Incubus. He was paired with the celebrity Brandon Boyd. All the judges were impressed by his magical voice. Sky is the limit for him, a statement was given by Judge Luke.

Chayce had performed Bob Marley’s “Waiting in Vain.” This time, he proved himself by giving an absolutely incredible and confident performance. One of the complement was, It’s not about glitz and glamour, Chayce is just a real guy and America has fallen in love with him.

In this round, Chayce sang ” (Everything I Do) I Do It for you” from “Robin Hood.” According to the judges, Chayce found himself in this performance. Luke had called him ‘Frontrunner’.

Chayce’s Disney song was  “Baby Mine” from  “Dumbo”. As usual he was incredible and delivered the song in his supper-cool style. At this time, Lionel also had encouraged him to enjoy the moments.

In this round, each contestant had to perform two songs, one from Coldplay and the other for Mother’s Day. Chayce’s Coldplay song was “Magic.” From this performance, Chayce had assured all of us that he has ‘signature voice”. His Mother’s Day song was “Mamma” Which was written by himself. Chayce had dedicated this song for his Mom. Chayce’s heart-touching performance had made Lionel Richie cry.

As per this round, Chayce performed “Colder Weather” by the Zac Brown Band for his personal Idol song. Chayce Beckham performed on “Break My Heart Again” with Casey Bishop (top 5 finalists) as a duet partner made by Finneas, a guest mentor. For Winner’s Single, Chayce sang “23”, written by him and also performed on his earlier song of this competition, “You Should Probably Leave” by Chris Stapleton. “You were born on American Idol”, a statement was given by judge Katy Perry. Also, Lionel had complimented that Chayce turned into a complete transformation and stepped into his light.