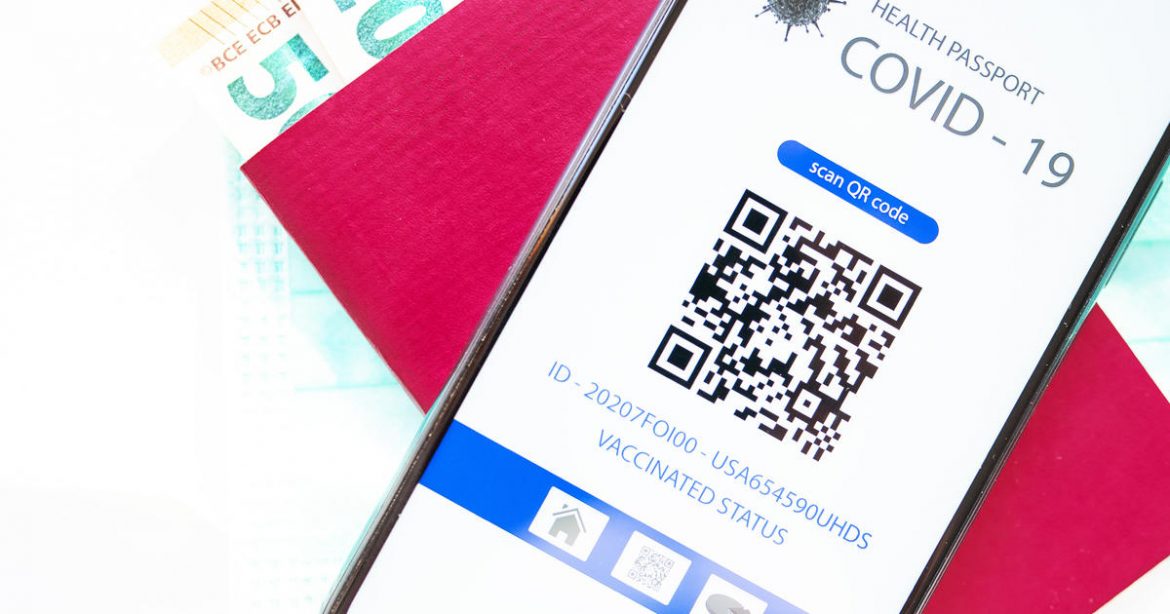 Outside of a handful of states that have poured resources into piloting so-called “vaccine passport” type systems, most Americans still have few options to prove whether they are fully vaccinated against COVID-19.

If you got your COVID-19 vaccine from providers like Los Angeles County or Walmart, you can download a record of your doses to your phone. But except in states like New York, which began piloting its “Excelsior Pass” in March, most states cannot easily provide smartphones with proof of your doses of Pfizer, Moderna, or Johnson & Johnson.

“I know there are several states that are implementing something like this now, that will leverage their registry. But broad scale adoption? I don’t think it’s feasible in the near future, meaning at least in the next calendar year,” says Rebecca Coyle, executive director of the American Immunization Registry Association.

Coyle said states have worked for decades to standardize and ease information sharing between their records, as people moving around the country sought to provide new schools and employers proof of their immunizations. This year, millions of COVID-19 vaccine doses have already been carefully tracked by state immunization registries — even across state lines.

However, providing a public-facing portal for residents to quickly verify each other’s vaccination status is far from a priority for some states.

“Is this a short term issue or is this a long term issue? I think that has to all be evaluated, compared with the resources and funding that are available. We know staffing is a huge concern right now in many jurisdictions. And then there’s also the political components that come into play as well,” added Coyle.

A handful of states have moved to prohibit businesses from requiring proof of COVID-19 vaccination. Meanwhile, other states that don’t have this kind of ban have seen a proliferation of forgeries mimicking the simple 4-by-3-inch cards doled out by the federal government.

The Biden administration has said for months that it did not plan to create a national system to track or prove COVID-19 vaccination, as countries like the United Kingdom have. The White House instead promised last month that it would be issuing  “some guidance, which will look like an FAQ,” but it still has not done so.

Instead, many U.S. companies and nonprofits plan to launch their own consumer-friendly options. They’re relying on technical specifications from private sector efforts like the Vaccine Credential Initiative, which promises “open, interoperable standards.”

“It’s a messy process, to be honest with you. It’s done in what’s called a standards development organization. We’re working with HL7 and the FHIR community, and all of that is done in public,” says Dr. Brian Anderson, co-founder of the Vaccine Credential Initiative, or VCI.

Anderson says the group’s standards lay out how vaccinators could digitally supply and verify a record of the shots they gave you, while also allowing for paper-based copies of the credentials — like an airline boarding pass — that could one day be scanned and verified by a ballpark or restaurant.

Anderson says Epic, the electronic health care records company that claims to span 250 million patients around the world, plans to roll out VCI’s SMART Health Card specification in the next few weeks. Cerner, one of Epic’s largest competitors, plans to deploy it by next month.

“It’s not about creating vaccine passports. It’s about empowering individuals to have their own health records and tell their own story. And at the same time, hopefully, enabling people to participate in the reopening of businesses or economies in a safer way,” said Anderson.

But for now, the lack of a widely available system poses a challenge for local health authorities and businesses, as they mull how to adopt new guidance by the Centers for Disease Control and Prevention recommending that only fully vaccinated Americans be allowed to stop wearing masks in most public situations.

“Today’s CDC announcement on masks creates ambiguity for retailers because it fails to fully align with state and local orders,” Lisa LaBruno, a senior executive vice president for the Retail Industry Leaders Association, said in a statement Thursday.

President Biden on Thursday downplayed concerns about the “very simple” recommendation, saying he believed “the vast majority of the American people care about the safety of their neighbors.”

“If you haven’t been vaccinated, wear your mask for your own protection and the protection of people who are also have not been vaccinated yet. It is not an enforcement thing. We’re not going to go out and arrest people,” President Biden said.

Cases have plummeted in the United States as a growing share of Americans has been fully vaccinated against COVID-19. More than one-third of the total U.S. population has completed their regimen of vaccine doses, according to the CDC, and more than 46% have gotten at least their first dose.

But modeling published by the CDC also warned earlier this month of more deadly surges in the pandemic that could “undermine” the nation’s progress if unvaccinated people abandoned mask wearing. Americans who had yet to be vaccinated were already less likely to wear a face mask, according to recent surveys.

“If things get worse, there is always a chance we may need to make a change to these recommendations. But we know that the more people are vaccinated, the less cases we will have,” CDC Director Dr. Rochelle Walensky told reporters at a briefing on Thursday.