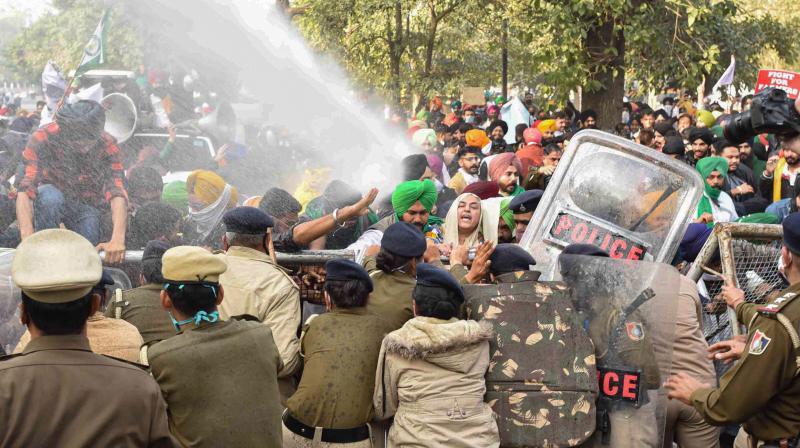 The meeting with 13 farmers’ unions was convened by Mr Shah to break the deadlock over the three farm laws on a day the unions had called for a nationwide strike supported by most Opposition political parties. The farmers’ leaders remained adamant on their stand and made it clear that they will call off their agitation only after their demands were fully met.

This was the first time that Mr Shah met the farmers’ leaders to discuss their concerns and demands. The meeting lasted for over two and a half hours.

At the meeting, Mr Shah proposed written assurances on amendments on minimum support price and APMC. The new proposals will be given in writing to the farm unions on Wednesday.

“The sixth round of talks between the farmers’ leaders and the Centre scheduled for Wednesday has been cancelled,” All India Kisan Sabha general secretary Hannan Mollah said after the meeting. Mr Mollah said the government will instead send a proposal for the consideration of the farmers’ unions.

The meeting between Mr Shah and the leaders of the protesting farmers’ groups on Tuesday got delayed owing to a confusion over the venue of the meeting. The meeting was due to begin at 7 pm but it actually started after 8 pm as some of the union leaders were not ready to hold the meeting at the minister’s residence. Finally, the meeting was held at the Indian Council of Agricultural Research campus in Pusa. Agriculture minister Narendra Singh Tomar, consumer affairs minister Piyush Goyal and senior officials of the ministry were also present.

One farm union leader, Ruldu Singh Mansa, did not take part in the meeting due to the confusion over the venue. In a social media post, Joginder Singh Ugrahan, who was not invited to the meeting with Mr Shah, said there was no need for the talks before official consultations and hoped that the leaders attending Tuesday’s meet would keep in mind the views of the larger group.

The meeting, however, appeared to have created a discord among the organisations spearheading the protests at Delhi’s borders for the past 12 days, with the head of the BKU (Ugrahan), which is one of the largest outfits in the group, questioning the rationale of the talks a day before the scheduled official consultations.

Hours ahead of a meeting with Mr Shah, the farmers reiterated their stand of not compromising on their demand that the three contentious farm laws be repealed. “There is no midway, we will demand just ‘yes’ or ‘no’ from home minister Amit Shah at today’s meeting,” farmers’ leader Rudru Singh Mansa said.

In another development, Haryana chief minister Manohar Lal Khattar, who met Mr Tomar at his 3, Krishna Menon Marg residence in Delhi, said the agriculture minister had promised that the minimum support price for farmers’ crops will be protected. Mr Khattar tweeted this after meeting Mr Tomar and asserted that all BJP governments in the states as well as the Centre accorded the highest priority to farmers’ interests. “On the issue of farmers, I had a meeting with Narendra Singh Tomar Ji. He has assured that the MSP will be protected,” Mr Khattar tweeted.