Ammon Bundy is leading an on-demand, anti-mask militia. Some members have ties to alt-right organizations 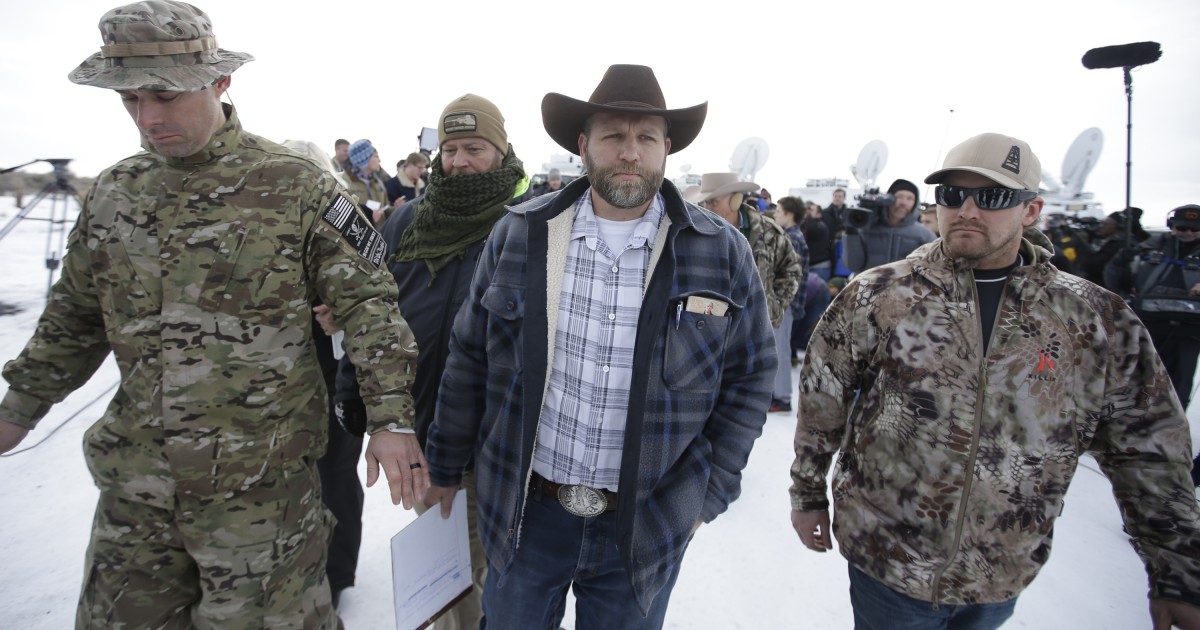 The two dozen demonstrators pressed against the emergency-room doors, screaming to be let in.

“Show us the law!” they chanted.

“Let Grandma out!” one shouted.

They had descended on Legacy Salmon Creek Medical Center in Vancouver, Wash., the evening of Jan. 29 to protest the quarantine of Gayle Meyer, a 74-year-old patient who had refused to take a test for the coronavirus.

Police in riot gear guarded entrances as the activists — who authorities said were armed — insisted that Meyer was being held against her will, a claim the hospital denied.

Meyer’s 49-year-old daughter, Satin, an anti-mask activist licensed as her caregiver, had summoned the demonstrators, foot soldiers in a rapidly expanding network called People’s Rights. With the tap of a thumb on a smartphone, members can call a militia like they’d call an Uber and stage a protest within minutes.

Behind the organization is a familiar name: Ammon Bundy.

He is best known as the leader of the 2016 occupation of the Malheur National Wildlife Refuge in Oregon — a deadly 41-day standoff between federal agents and militants who rejected the federal government’s authority over public lands across the West.

Now Bundy has seized on the backlash against coronavirus restrictions as an opportunity to start a new movement.

Since last March, when he launched People’s Rights — which he describes as “neighborhood watch on steroids” — the organization has attracted tens of thousands of members and sponsored more than 50 demonstrations across the country, dispatching gun-toting activists to the homes of politicians, health agency managers and even a police officer who had arrested a protester.

Experts who track extremists say that the network has significant overlap with white supremacist groups and other far-right organizations and that it has whipped up paranoia and rage, risking lives of hospital workers, health officers, politicians and others in the crosshairs.

“We have the potential for multiple Malheurs in multiple states, in that at any moment they could bring hardened far-right activists, often heavily armed, into any one event,” said Devin Burghart, executive director of the Institute for Research & Education on Human Rights.

In October, the Seattle-based organization and the Montana Human Rights Network published an investigation that found that Bundy had rapidly expanded People’s Rights by fusing his core of far-right paramilitary supporters with “a mass base of new activists radicalized in protest” of coronavirus restrictions.

Group leaders envision a form of “neighborhood nationalism,” in which the “righteous” stand against the “wicked,” the report said.

Investigators found that the network had 20,000 members in 16 states. In an interview with The Times late last month near his home in Idaho, Bundy claimed it had grown to almost 50,000 people in 35 states.

Last fall, Facebook removed an undisclosed number of People’s Rights pages from its platform after deeming the network a militarized social movement.

Bundy said his sole cause was defending the freedoms guaranteed under the Constitution — even for LGBTQ people and Black Lives Matter activists whose views he may oppose.

He said he never supported President Trump and didn’t vote in the last two presidential elections. In 2016, he was in prison awaiting trial, and this past November he didn’t see a point. Contending that the COVID-19 death toll is massively exaggerated, he said that Trump should have worked harder to keep churches and businesses open.

Nonetheless, he encouraged his followers to go to Washington for the now-infamous Jan. 6 rally to distribute leaflets and display People’s Rights banners to recruit more members. He said he condemned the siege on the Capitol.

Bundy, 45, is carrying on a family tradition.

The fourth of 14 children in a Mormon family, he grew up on a Nevada ranch. His 74-year-old father, Cliven, became a hero to extreme libertarians in the West when he stopped paying grazing fees in 1993, claiming that his family had ancestral rights to run its cattle on public land and that the government’s ownership claims violated the Constitution.

Ammon Bundy left the ranch as a young man, first for Minnesota for two years of Mormon mission service and then to Southern Utah University. Later he moved to Phoenix, where he ran a truck repair business for 14 years.

In 2014, he stood with militias that rallied behind his father’s cause when FBI agents arrived at the Nevada ranch with a court order to confiscate the family’s cattle. The government backed down to avoid bloodshed, raising the family’s stature in far-right circles.

The next year, Bundy, his wife and their six children moved to Emmett, Idaho, a farming town turned bedroom community outside Boise.

But he said that God soon called him to support Dwight Hammond Jr. and his son, Steven — Oregon ranchers sentenced to prison for setting fires on federal lands. In January 2016, Bundy led an armed group that seized the headquarters of the Malheur refuge, demanding that the government relinquish ownership and free the Hammonds.

Bundy was arrested during a traffic stop outside the refuge and eventually tried on weapons and conspiracy charges. A militant who fled the stop was shot and killed.

In a startling verdict in October of 2016, Bundy and other defendants were acquitted by jurors who found that federal prosecutors had failed to make their case.

The family’s aura of invincibility only grew when a judge declared a mistrial in a criminal conspiracy case against Bundy, his brother Ryan and their father for the 2014 Nevada ranch standoff, saying government lawyers had suppressed evidence.

The cattle outside Bunkerville, Nev., continue to graze on public land despite more than $1 million in unpaid fees.

Bundy kept a low profile back in Idaho, where he managed rental properties and restored vintage vehicles with his children. But the pandemic — and resistance to the government telling people what to do — set the stage for his return to activism.

In March, he gathered several dozen supporters in a warehouse he owns in Emmett.

In its first public act, the group defied Republican Gov. Brad Little’s stay-at-home directive and held an Easter service for about 60 people.

The same month, police arrested Sara Brady, an anti-vaccine activist, for allegedly trespassing during an anti-lockdown protest at a Boise-area playground closed due to coronavirus restrictions.

Bundy publicized the address of the officer who arrested her and led about 40 people to protest outside his home, a tactic that the governor called “disgusting.”

But People’s Rights continued to expand, establishing hundreds of chapters that Bundy organized with the aim of being able to dispatch 10 protesters to a scene in 10 minutes, 100 in 100 minutes and 1,000 in 1,000 minutes. He instructed each chapter to launch teams to train in secret for paramilitary operations to defend members from criminals or government agents.

In July, he led demonstrators to a public building in Caldwell, Idaho, where they tried to barge into a meeting of officials who were discussing whether to impose a local mask mandate.

“This is not your building,” Bundy shouted as he shoved a man guarding the doorway, video of the protest shows.

The meeting was canceled, though the health board eventually decided to recommend wearing masks in public.

The next month, Bundy and some supporters forced their way past state troopers into an Idaho Statehouse gallery that had been closed because of the pandemic. Police arrested Bundy twice in two days, finally wheeling him out of the building in an office chair. Charged with trespassing and obstructing officers, he was banned from the Capitol for a year.

“Snitches get stitches,” one woman yelled.

The next month, the Boise-area health board shut down its own meeting after a county commissioner tearfully interrupted the proceedings to say she had to rush home because People’s Rights demonstrators were harassing her family.

“My 12-year-old son is home alone right now, and protesters are banging outside the door,” Diana Lachiondo announced.

In the interview last month, held at a restaurant in Emmett, where masks are optional and few people wear them, Bundy defended his group’s methods, saying the government and society are “deteriorating” — that courts are unjust, legislatures trample rights and families allow the state to educate and influence their children.

“People will need more and more to be able to find security,” he said.

He said protests could achieve results much faster than lawsuits, citing a demonstration his group staged last June at a hospital in Olympia, Wash.

Hospital officials weren’t allowing a couple to be with their newborn after the mother tested positive for the coronavirus.

“Within an hour and a half, we had a couple of hundred people there and a couple of thousand people coming,” Bundy said. “Once the hospital started to see there was literally a presence of people, they retracted their position, blamed it on the health department and released the baby.”

Angela Maki, a Providence St. Peter Hospital spokeswoman, disputed the accuracy of Bundy’s account but said that patient confidentiality prevented her from discussing the case.

Asked whether hospital staff members were given a chance to explain their reasoning for isolating the baby, Bundy said no.

“You don’t get to take somebody’s baby and think you have a side of justice,” he said. “It was black and white.”

Last month at the hospital protest in Vancouver, Wash., Kelli Stewart, the People’s Rights coordinator for the area, narrated a livestream video on Bundy’s YouTube account that ultimately attracted more than 70,000 views.

The video shows a protester trying to pry open locked double doors, and a deputy spraying chemical irritant in his face. The protesters cheered when the hospital released Meyer, whose tearful daughter wheeled her out and helped her into a van.

Stewart, a longtime Bundy compatriot, berated law enforcement for siding with the hospital instead of the protesters. She said that right-wing activists who joined “back the blue” rallies last summer and waved American flags with blue lines had been duped.

“We’re starting to learn that you’re actually the standing army our founders warned us against,” she said. “They’re just dangerous tyrants. We’re having a blue-line flag-burning party tonight.”