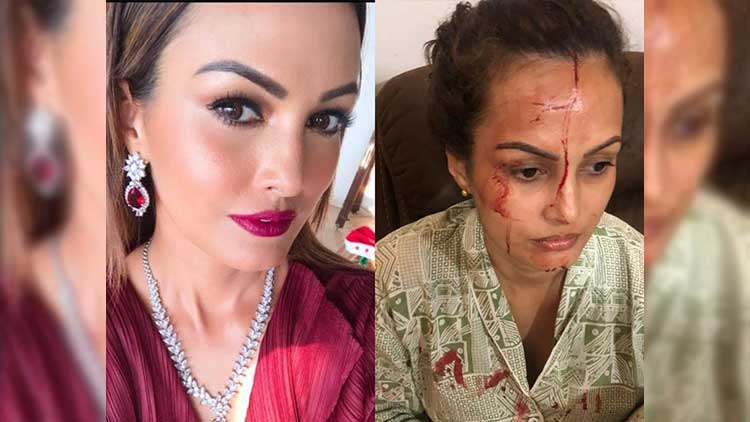 Television actor Nisha Rawal held a public conference after filing a police complaint against her husband Karan Mehra for assaulting her, and made some shocking revelation, said, he is having an affair and this is not the first time he has physically abused her.

Karan was arrested yesterday by the Goregaon police, but the actor made bail. Nisha shared her ordeal with the media. She started by saying, “It’s extremely embarrassing that I am interacting with media like this, but I want to tell my side of story, so that when my son grows up, he knows the truth. We’ve been together for 14 years and we’ve been married to 9 years, a lot has happened in these years, which hasn’t come out. But now when we’re discussing our divorce, I don’t know how to say it in a dignified manner, but Karan is having an affair with another girl”.

“I don’t want to discuss his affair in details, I recently discovered his affair, and even he admitted having a girl in his life. So I asked him if it was a passing fling or he is serious about it, he said he loves the girl and I have been having physical affair with her. The girl is from Delhi”.

“I didn’t want to react or create a scene, so I’d asked Karan to discuss the situation. Next morning, I took a flight to meet my parents in Delhi but I didn’t get the desired support. I even tried to fix things with Karan, but he is not interested”.

Further adding, Nisha said his image of good-two shoes is all facade, which even she helped maintain over the years. “Karan’s behaviour is not right; his image of goody-shoes is a facade, I even tried to keep it intact for years now. He has raised his hand on me, many times in past. He has given me black eyes”.

Talking about her recent altercation with Karan, she said, “Last night I confronted Karan about our future and my child’s future. He got physical with me, he held me by my hair, pushed my head into the wall, blood started pouring out of my head and I kept asking him why does he hates me so much…later I called police.”
Karan Mehra made the bold claim stating that Nisha is bipolar and she has staged everything to smear his name and extort some money from him..

Nisha said, “Yes, I am bipolar, I am not going to lie about it and neither I am ashamed about it. Bipolarity is a mood disorder….I lost my child in 2014, I was five months pregnant. Karan was extremely abusive, I was through a lot of trauma, and that is when I went to my therapist. Karan didn’t want me to go but I still went. I was diagnosed with depressive phase of bipolarity. I took medication for it”.

“He is making such non-sense claims, why would I hurt my face, I am an actor, I understand the face-value. He is clearly lying. He took all my jewellery, he always hit me when there are no cameras’, and he is shady and manipulative”.