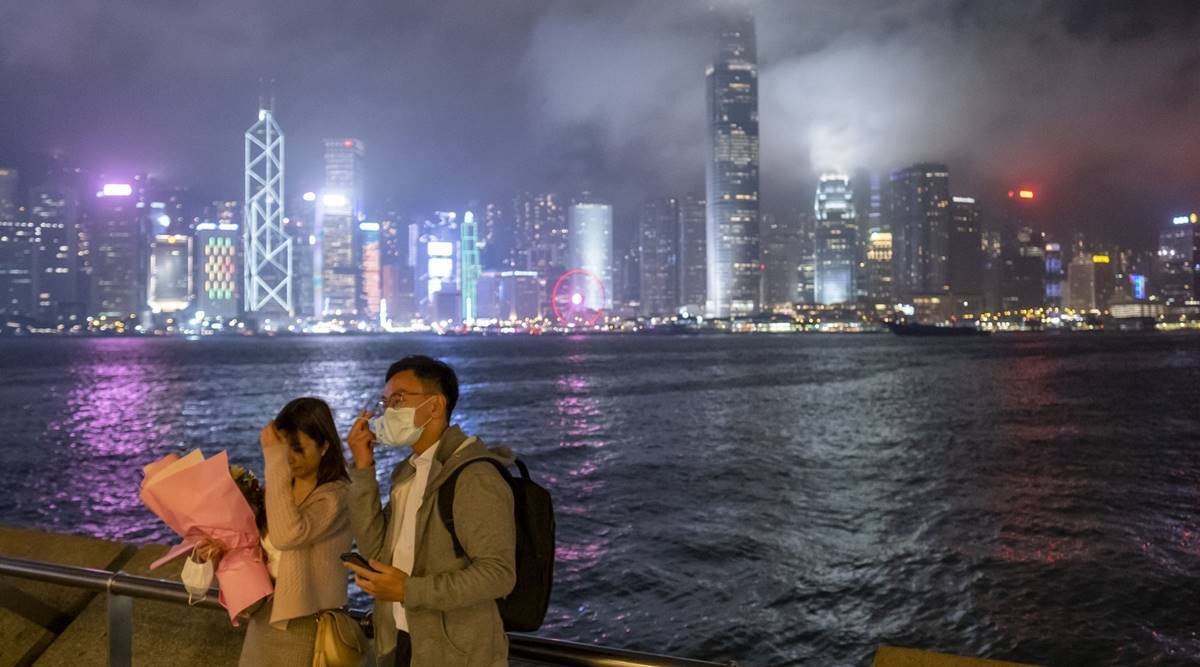 
People adjust their hair and a protective mask while posing for a selfie photograph against the city skyline at night in the Tsim Sha Tsui district of Hong Kong, China (Blooomberg)

As Hong Kong battles a new wave of coronavirus infections with yet another round of social restrictions, a sense of fatigue with the confusing and inconsistent nature of the city’s pandemic response is setting in among business-owners and residents.

Though the Asian financial center has thus far been relatively unscathed — total Covid-19 cases amounting to just 81 cases per 100,000 people out of a densely packed 7 million population — the city has encountered more waves than most other places and is entering its fourth round of stop-start restrictions.

“Hong Kong has undoubtedly been lucky with the pandemic so far. What has been missing is a clear, public road map as to how and when restrictions will be implemented and when the rules will be relaxed,” said Nicholas Thomas, associate professor in health security at the City University of Hong Kong.

The coronavirus has been an unpredictable and volatile foe, warranting nimble and quick-changing reaction from governments. But as the pandemic approaches its first anniversary, Hong Kong’s residents and business-owners are increasingly looking to the structured response systems in place in regional neighbors like New Zealand, South Korea and Singapore in envy.

The former British colony’s comparatively erratic response is deepening the crisis in an economy already on its knees from months of restive street protests followed by the pandemic, they say.

The sharp rise in new local cases in the past week is linked to social dancing venues, yet officials have announced a closure of bars, karaoke rooms and massage parlors. Like in previous rounds, the restrictions are imposed for a week or two at a time, leaving business-owners in a state of suspended animation and unable to plan long term.

“At the moment, I’m waiting for Friday afternoon to see if they’re closing more classrooms,” said Stephanie Holding, a mother of three sons who runs her own business from home. She would rather see a system that lets people “know what’s affected and when,” she said.

Hong Kong says it takes a flexible “suppress and lift” approach to virus restrictions based on the advice of medical advisers. But other “high risk” businesses like gyms and restaurants don’t know when they’ll be asked to close, and only some are required to enforce a little-used health-code app before allowing patrons in. To add to the confusion, schooling and childcare services for younger kids were also shut down again earlier this month — but because of an outbreak of the common cold and not Covid-19.

In other places with different phases or alert levels that determine what restrictions are activated at what stage of infection, “we know we’ve reached this level and this is what will take place next,” said Allan Zeman, an economic adviser to Hong Kong Chief Executive Carrie Lam and Chairman of Lan Kwai Fong Group, a major landlord in the city’s bar district. “You have a sense of ‘this is what we need to do to get back to zero,’ rather than just ad-hoc decision making week by week.”

The government defends its approach by saying that the public alert level systems employed elsewhere don’t work in Hong Kong. Lam Ching Choi, a medical doctor and a member of the chief executive’s advisory Executive Council, said that he did not believe that a “very structured approach” was right for what he touts as “the most free economy in the world.”

Instead, Lam likened the Hong Kong approach to “precision medicine,” and said that the focus was on maintaining normality as far as possible rather than turning to blanket lockdowns. “So when you walk in our city, you don’t really feel like Covid-19 is going on, apart from wearing masks.”

The risk is that this “precision” is seen as arbitrary by businesses: with no current virus clusters directly linked to the bar industry, the latest ruling for bars to shut down has “zero scientific basis,” said David McEwan, the owner of Bobby’s Rabble, a bar in the Central district.

Though bars and nightclubs are generally regarded as high-risk locations in every country, businesses say they lack understanding over the level at which they’ll be singled out and what circumstances would allow them to re-open.

“This is one of the busiest times of the year and we have no idea if it’s a week or will there be a extension every week like last time,” said Ravi Beryar, managing director of Liquid Management Ltd, which operates two nightlife venues in Hong Kong’s main bar districts.

Hong Kong Closes Bars And Nightclubs Due to Virus

Beryar and others say they would like a more methodical and transparent approach akin to that of other countries in the Asia Pacific region who have been among the most successful in the world in containing the spread of Covid-19. New Zealand, for example, introduced a four-tier alert system near the beginning of the pandemic, and has been widely lauded for its clarity in communicating the system to its citizens. Singapore in May announced a three-phase roadmap for the gradual resumption of normal life.

South Korea, which has been reporting its highest number of new cases in eight months, has also been continuously enforcing and relaxing social restrictions in response to case numbers. However, its strategy is dictated by a five-step system whereby certain measures are triggered when cases reach a certain threshold. Currently the country is in level 2 of restrictions, meaning restaurants can only operate limited hours and high-risk facilities are closed.

“While the real world is inevitably more messy than a lab, having a clear structure that is above politics help to foster trust in the response strategies,” said CUHK’s Thomas.

Another group of people frustrated with Hong Kong’s response are parents, who have endured up to three rounds of school closures this year. The latest, the shutting down of only nurseries and kindergartens — followed by primary one to three — was triggered by an outbreak of upper respiratory tract infections, for example, and not the novel coronavirus.

“In other countries, they are keeping schools open at all costs,” said Rosheen Rodwell, a mother of three children who said that communications from the government has been lacking in terms of whether they are prioritizing schools. “People are prepared to get on board and make sacrifices if they understand why.”

Lam, the government adviser, clarified that the overall strategy is now to keep schools open, having learned from epidemiological studies from around the world that it’s “relatively safe” to do so. The recent closure of kindergartens, he said, was necessary as upper respiratory tract infections are indistinguishable from Covid-19 without testing, and the plan is to open them again as soon as possible.

David Heymann, an infectious diseases expert at the London School of Hygiene & Tropical Medicine, said that Hong Kong still has a far higher capacity for contact-tracing and cluster-busting than many other countries. “They’re actually finding where transmission is occurring, they are shutting it down and then they are cautiously re-opening it again to see whether or not transmission increases.”

As pandemic fatigue grows across the world, people need more information as the cycle repeats. “Transparency is the most important. If the governments are being transparent as to why they are closing down then yes, people will better understand,” he said.

RELATED:  UK prepares for ‘historic moment’ of vaccination against COVID-19