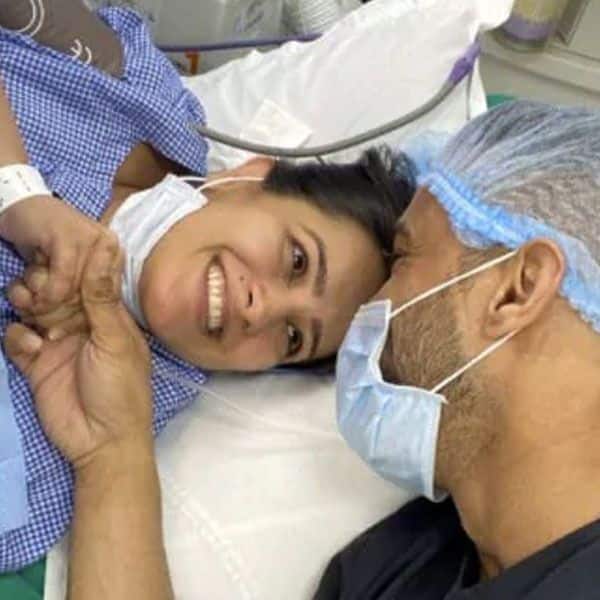 Anita Hassanandani and her husband Rohit Reddy welcomed a baby boy yesterday. Rohit Reddy took to Instagram to make the announcement. He shared a pic in which he is seen kissing Anita and captined it ‘Oh Boy!’. Soon, all their friends from the television industry poured in best wishes for the couple. Now, Rohit Reddy has shared a selfie with Anita Hassanandani from the hospital room and the picture is just too cute to handle. A few more of their pictures have gone viral on the internet. Rohit Reddy captioned the picture saying, “Love you, baby. Most beautiful moments ever.” Also Read – When Anita Hassanandani flaunted her baby bump in a black monokini; called women the real heroes

Earlier, Anita opened up about being pregnant at the age of 39 in an interview with ETimes. “The age-factor did play on my mind. Many people told me that it’s going to be tough, it overwhelms you. But once I conceived naturally, I realised that age is just a number. You need to be mentally and physically fit for everything to fall in place. Jo naseeb mein likha hota hai, woh toh hota hi hai. Today, Rohit and I feel well-settled — we are financially and mentally in a place where we are ready to have a child.” Also Read – Viral Pictures: From Varun Dhawan’s wedding to Kareena Kapoor Khan’s pregnancy photoshoot — 5 pics that set social media on fire

“I want to enjoy motherhood and focus on my family for a while as this time never returns,” Anita had said in an interview while opening about the pregnancy. She also revealed what she would like to name the baby if it’s a boy. Anita said that her father-in-law had passed away. “A few days later (of being hospitalised), he passed away. Now, Rohit, believes his father is returning as our child, so, if we have a son, we will name him Ravi after him.”