Home EntertainmentGossips Anita Hassanandani wishes for things to get back to normal; Says ‘Damn you Covid’

Anita Hassanandani wishes for things to get back to normal; Says ‘Damn you Covid’ 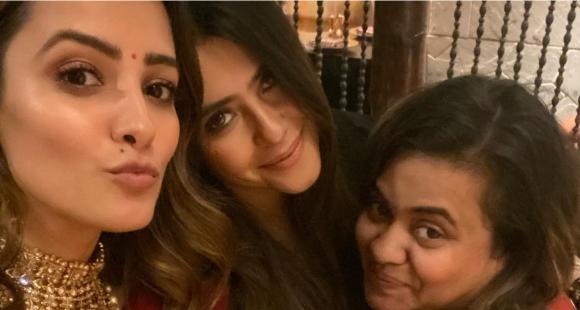 The new mother Anita Hassanandani curses Covid as she wishes for things to get back to normal.

Anita Hassanandani wishes for things to get back to normal; Says ‘Damn you Covid’

The stunning actress and the new mother Anita Hassanandani is enjoying her new phase of life. The actress became a mother to a baby boy in February 2021 and she is loving the time she spends with her little piece of heaven. The actress is very active on social media and often shares pictures, stories, videos, etc. on her social media handles. She is famous for her quirky comments and gorgeous pictures on the internet. But it seems like now the actress is missing her acting days as she recently posted a picture with her producer and friend Ekta Kapoor.

The popular show Yeh Hai Mohabbatein actress Anita Hassanandani has posted a picture with her close friends Ekta Kapoor and Tanushri Dasgupta. The actress looks perfect in her wine red sari and printed blouse as she pouts along with her friends. She is also wearing a beautiful traditional choker and glittery makeup with a small red bindi, which is suiting her look for her shoot. The actress expressed her anger in the caption saying that she wishes their lives are back to normal very soon. She also gets frustrated with covid and says that she hates it. The actress showered loves to Ekta Kapoor and Tanushri Dasgupta.

If only our life could go back to normal.

The prominent actress had started her TV career with the show Kkavyanjali, which was under the production house Balaji Telefilms of Ekta Kapoor. After the show, she has worked on numerous other projects with the producer and shares a good friendship with her.