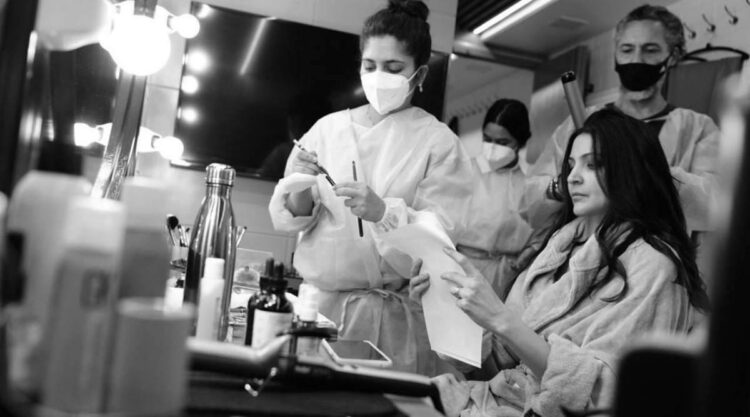 Anushka Sharma is back on the set after becoming a mother to daughter Vamika in January. She shared a photo of herself as she got ready for her next project. The actor is back to work two months before her scheduled return in May.

In her latest Instagram post, Anushka is seen looking presumably at the script of the advertisement she is shooting for. Her hairstylist and makeup artist are also there in the monochrome picture. On Wednesday, the actor was spotted entering the set and looked gorgeous in her beige top and loose denims.

However, ever since her photos of resuming work came out, an old video of her interview with Simi Grewal has started doing the rounds on the internet. In the interview which the Zero actor did for the talk show, Simi Garewal Selects India’s Most Desirable, she said she doesn’t wish to work after marriage. When Grewal asked 23-year-old Anushka how important marriage is for her, she shared, “Very important. I want to be married. I want to have kids. And when I am married, I probably would not want to be working.” The episode aired on July 31, 2011.

But things changed for the actor after she fell in love with Indian skipper Virat Kohli. The two tied the knot in December 2017 in Italy and have been setting major couple goals for their fans ever since.

On the work front, Anushka has been more focused on her production company Clean Slate Films for the last couple of years. She hasn’t announced her next film yet. She was last seen in the 2018 release Zero which also starred Shah Rukh Khan and Katrina Kaif.