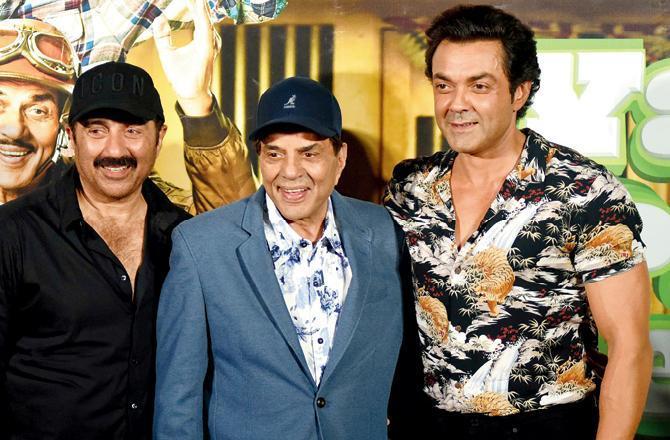 The Deols are all set to reunite on-screen two years after Yamla Pagla Deewana: Phir Se (2018); but this time with the third generation scion will join them too! Yes, you heard that right! Dharmendra, sons Sunny Deol and Bobby Deol, and grandson Karan Deol will be seen together on-screen for the first time in Apne 2, the sequel to 2007’s hit drama.

Remember how the terrific Deol trio created magic on screen with Apne? Now, 14 years later, the team is up for an encore. Joining the terrific trio this time will be Sunny’s elder son Karan Deol, and that makes this project even more interesting! Where the 2007 drama revolved around a family united by their love for boxing, Bobby Deol had already revealed to mid-day, earlier this month, the second instalment will offer a fresh story.

The second instalment of Apne has been in the works for quite some time and now, the entire script is in place, revealed the makers. The movie will be directed by Anil Sharma, who helmed the first instalment, and will be produced by Deepak Mukut. A source close to the film shared, “Apne had touched a billion hearts with a good mix of action, emotions and values. Keeping the essence and values of the first film, Apne 2 takes the original engaging story many notches higher in its action, drama, emotions and entertainment with new characters being added in.”

Apne 2 will go on floors from March 2021, in Punjab and Europe and the family entertaining sports drama is being readied for a grand release on Diwali 2021.

Talking about Apne 2, Dharmendra shares, “Apne is one of the best films of my life. A joint effort by the whole unit, received very well by you all. Now, I’m very happy because I will get to shoot Apne 2 with my entire family – my sons Sunny, Bobby and my grandson Karan. It will be a very special film and I am looking forward to shooting.”

Anticipation levels have skyrocketed and this will definitely be the big Diwali extravaganza next year to look forward to. The leading lady and details of the other cast members are still under wraps.

Also Read: Bobby Deol opens up on son Aryaman and nephew Karan Deol like never before!