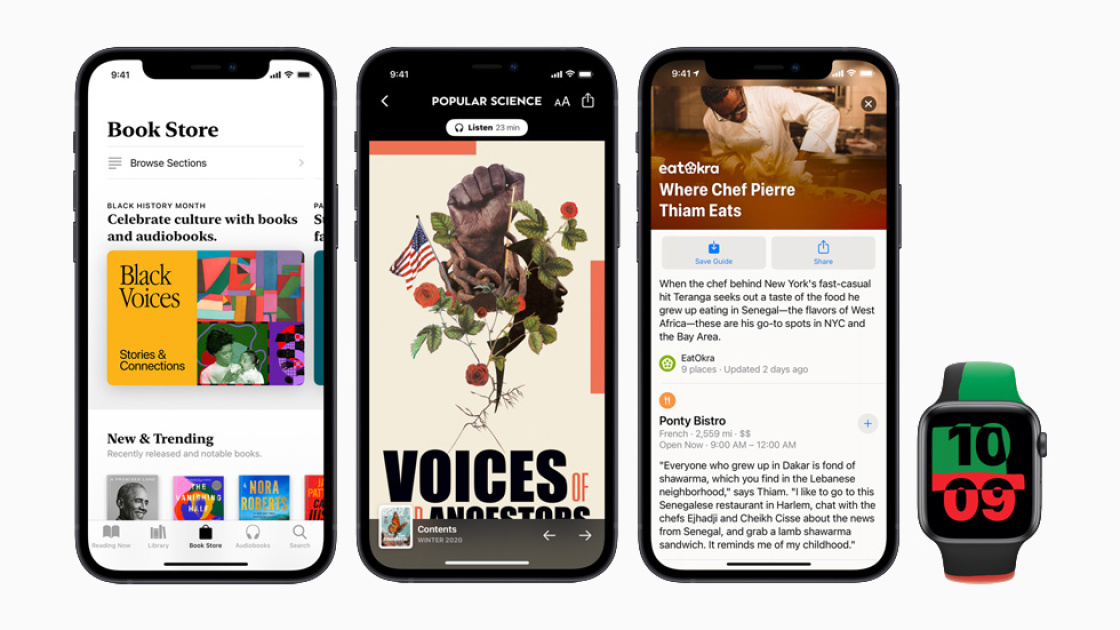 Apple Watch users will also be able to take part in a Unity Activity Challenge. Close your Move ring seven days in a row during February and you’ll claim a limited-edition award.

Apple Watch Series 6 Black Unity (which starts at $399 for the GPS model and $499 for the cellular version) and the Black Unity Sport Band ($49) will be available from February 1st. You’ll be able to start using the Unity watch face when watchOS 7.3 rolls out today. The update also enables the Time to Walk audio storytelling feature in Apple Fitness+, as well as the ECG app and irregular heart rhythm notifications in a few more countries.

Elsewhere, Apple will highlight Black voices throughout February. A Black History Month hub in the App Store will shine a spotlight on Black-owned businesses, developers, entertainment apps, gaming apps and social justice apps. It will also include stories from Black developers focusing on the importance of representation in games and apps.

Apple Music will place a focus on Black musicians throughout the month with curated playlists, original videos and essays from Black musicians, authors, directors and influencers. You’ll be able to check out Apple Maps Guides that the company worked on with EatOkra, an app that works with chefs to build a directory of Black-owned restaurants.

In the Apple TV app, the Essential Stories theme will center around the “multidimensionality of the Black family and its representation onscreen.” It will call attention to a selection of TV shows and films that delve into topics like parenthood and queer chosen families, while highlighting some of the most memorable TV families.

Apple News will offer curated topic groups that emphasize stories about the issue of race in America and audio articles that acknowledge the Black experience. Apple will also honor Black History Month through Podcasts, Fitness+ and the latest Shot on iPhone campaign, as well as Today at Apple virtual sessions and tutorials that showcase ways to use creativity to bring about change.

Back to Top
Close Add post
X
Sony’s WF-1000XM3 ANC earbuds are 23 percent off right now…GadgetsAll products recommended by Engadget are selected by our editorial team, independent of our parent company. If you buy something through one of the li…

X
Apple’s M1 Mac mini is $50 off at Amazon and B&H…GadgetsAll products recommended by Engadget are selected by our editorial team, independent of our parent company. If you buy something through one of the li…
close