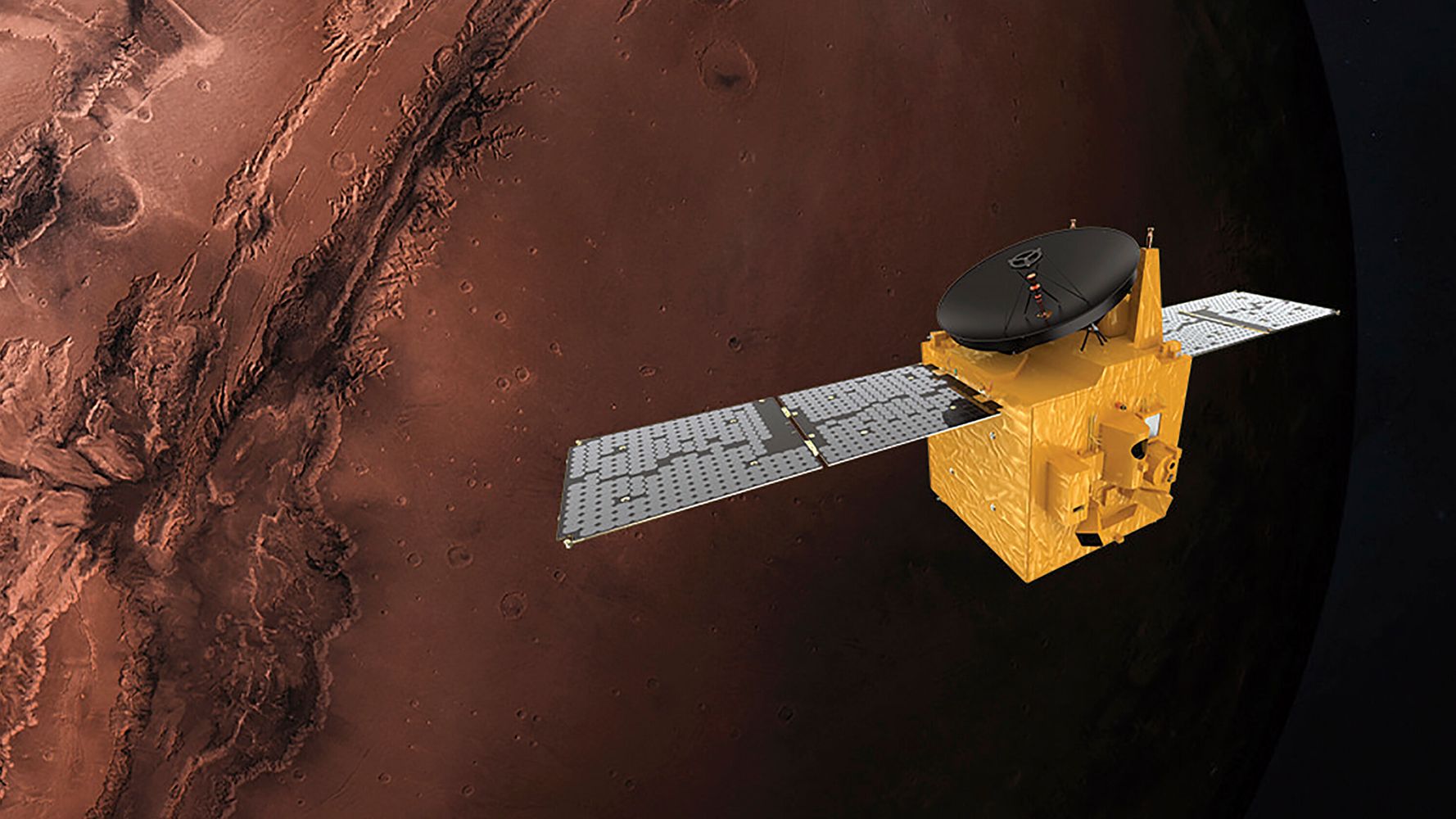 Mission controllers at the UAE’s space center in Dubai announced that the unmanned craft, called Amal, Arabic for Hope, reached the end of its nearly seven-month, 300-million-mile journey and began circling the red planet, where it will gather detailed data on Mars’ atmosphere.

The orbiter fired its main engines for 27 minutes in an intricate, high-stakes maneuver that slowed the craft enough for it to be captured by Mars’ gravity.

After the engine firing, it took a nail-biting 15 minutes or so for the signal confirming success to reach Earth. Ground controllers rose their feet and broke into applause. Tensions were high: Over the years, Mars has been the graveyard for a multitude of missions from various countries.

Two more unmanned spacecraft from the U.S. and China are following close behind, set to arrive at Mars over the next several days. All three missions were launched in July to take advantage of the close alignment of Earth and Mars.

Amal’s arrival puts the UAE in a league of just five space agencies in history that have pulled off a functioning Mars mission. As the country’s first venture beyond Earth’s orbit, the flight is a point of intense pride for the oil-rich nation as it seeks a future in space.

An ebullient Mohammed bin Zayed, the UAE’s day-to-day ruler, was on hand at mission control and said: “Congratulations to the leadership and people of the UAE for the indescribable joy of the arrival at Mars.”

About 60% of all Mars missions have ended in failure, crashing, burning up or otherwise falling short in a testament to the complexity of interplanetary travel and the difficulty of making a descent through Mars’ thin atmosphere.

A combination orbiter and lander from China is scheduled to reach the planet on Wednesday. It will circle Mars until the rover separates and attempts to land on the surface in May to look for signs of ancient life.

A rover from the U.S. named Perseverance is set to join the crowd next week, aiming for a landing Feb. 18. It will be the first leg in a decade-long U.S.-European project to bring Mars rocks back to Earth to be examined for evidence the planet once harbored microscopic life.

If it pulls this off, China will become only the second country to land successfully on Mars. The U.S. has done it eight times, the first almost 45 years ago. A NASA rover and lander are still working on the surface.

For the UAE, it was the country’s first venture beyond Earth’s orbit, making the flight a matter of intense national pride.

For days, landmarks across the UAE, including Burj Khalifa, the tallest tower on Earth, glowed red to mark Amal’s anticipated arrival. This year is the 50th anniversary of the country’s founding, casting even more attention on Amal.

The celestial weather station aimed for an exceptionally high Martian orbit of 13,670 miles by 27,340 miles (22,000 kilometers by 44,000 kilometers). It was set to join six spacecraft already operating around Mars: three U.S., two European and one Indian.

Amal had to perform a high-stakes series of turns and engine firings to maneuver into orbit and achieve what has eluded so many before.

“Anything that slightly goes wrong and you lose the spacecraft,” said Sarah al-Amiri, minister of state for advanced technology and the chair of the UAE’s space agency.

The success represents a tremendous boost to the UAE’s space ambitions. The country’s first astronaut rocketed into space in 2019, hitching a ride to the International Space Station with the Russians. That’s 58 years after the Soviet Union and the U.S. launched astronauts.

In developing Amal, the UAE chose to collaborate with more experienced partners instead of going it alone or buying the spacecraft elsewhere. Its engineers and scientists worked with researchers at the University of Colorado, the University of California at Berkeley and Arizona State University.

The spacecraft was assembled at Boulder, Colorado, before being sent to Japan for launch last July.

The car-size Amal cost $200 million to build and launch; that excludes operating costs at Mars. The Chinese and U.S. expeditions are considerably more complicated — and expensive — because of their rovers. NASA’s Perseverance mission totals $3 billion.

The UAE, a federation of seven skeikhdoms, is looking for Amal to ignite the imaginations of the country’s scientists and its youth, and help prepare for a future when the oil runs out.

“This mission was never about just reaching Mars,” said Omran Sharaf, Amal’s project manager. “Mars is just a means for a much bigger objective.”