Armed protesters angry over virus restrictions try to force their way into the Oregon Statehouse. 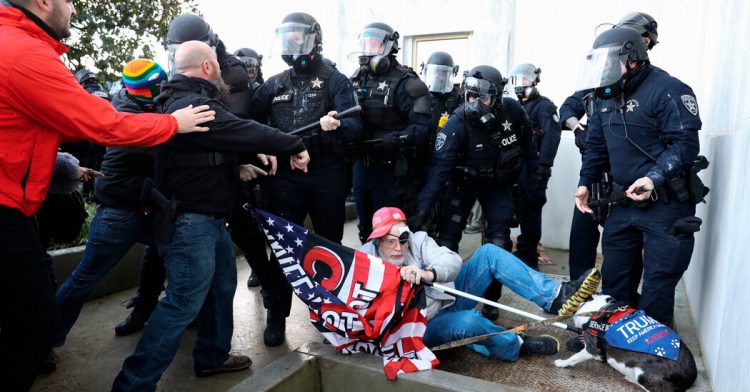 Armed protesters trying to force their way into Oregon’s State Capitol building on Monday were met by officers in riot gear, as lawmakers gathered for a one-day special session amid growing tension over coronavirus restrictions in the state.

The Oregon State Police declared the protest, which included dozens of people, an unlawful assembly, and officers fired pepper balls to drive the crowds away from the Capitol in Salem. Police arrested at least two people, including one person authorities said had used bear spray against officers. Later, some in the crowd smashed windows at an entrance to the Capitol.

Gov. Kate Brown had called a one-day special session of the Legislature to address issues related to the pandemic, including relief for landlords and tenants and funding for vaccine distribution, as well as efforts to address the state’s devastating wildfire season.

Protesters objected to restrictions imposed by Ms. Brown to limit the spread of the coronavirus, shouting about their impact on jobs and schools. “Arrest Kate Brown,” the crowd chanted at officers. One person carried a sign saying, “Politicians are the virus, revolution is the cure.”

Riot officers with batons, some wearing gas masks, later moved in large numbers to shove protesters out of an entranceway to the Capitol building. Many in the crowd yelled that they had long supported law enforcement officers, including at “Back the blue” rallies, but would no longer back them.

Oregon’s coronavirus infection numbers are at the highest point of the pandemic. Under the governor’s orders, many counties face mandatory restrictions, such as prohibitions on indoor dining at restaurants.