Home News Around 2,800 returnees from U.K. being monitored: Minister

Around 2,800 returnees from U.K. being monitored: Minister 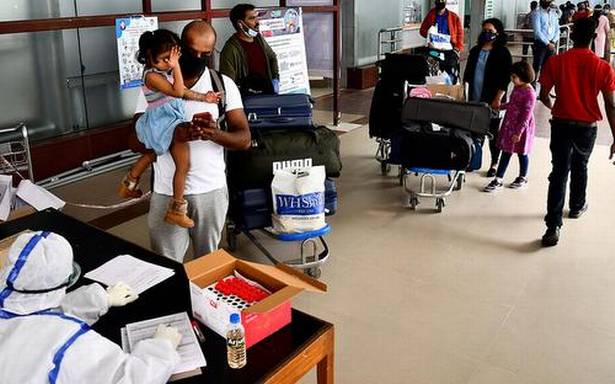 Health Minister C. Vijayabaskar on Wednesday said around 2,800 persons, who had arrived in the State from the U.K., over the past few days, were under complete observation. These persons were under “three-pronged observation”, he said.

Their particulars have been provided to the police and the Health Department, besides local body authorities, he said, speaking to reporters in Veerapatti village, Annavasal block, in Pudukottai district, after inaugurating an Amma Mini Clinic.

Asked whether these persons would be subjected to RT-PCR tests again, Mr. Vijayabaskar said the tests had already been done and that they had tested negative. They are under observation to check if they have any symptoms, he said.

Appealing to the people not to panic or fear over the rapid spread of a new strain of the virus in the U.K., Mr. Vijayabaskar said the infection continued to be under control in the State. People should strictly adhere to the guidelines laid down by the Health Department, he said.

As many as 22 persons who arrived from other countries were tested on Wednesday to rule out the possibility of them being infected with the mutated COVID-19 virus. Health workers lifted samples from persons returning to the State by flights. Of these, 12 passengers arrived in Chennai from Dubai, and nine from Delhi by Air India flights. One person who arrived at the Tiruchi airport was also tested. The person hailed from Thanjavur, according to health officials.

On Tuesday, 24 persons coming from various places by flights were tested.

Of the 37 samples tested so far, the result of just one has returned positive. The test results of four others are awaited, officials said.

Officials have identified 15 passengers, including those who were seated behind or adjacent to the passenger who had tested positive. His test result is awaited from the National Institute of Virology in Pune.

The Health Department has intensified testing after the U.K., a few other countries in Europe and Australia reported that several people had been infected with a mutated COVID-19 virus.