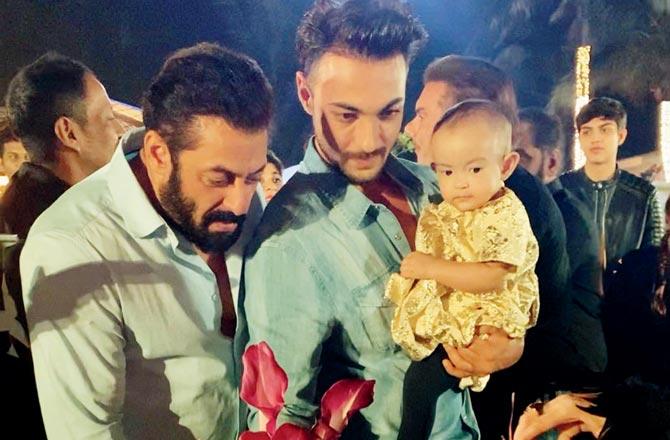 Salman Khan and niece Ayat’s birthday bash was not exactly a small affair. A day after the celebrations at the Panvel farmhouse, guests, including Sunil Grover, Riteish Deshmukh and Ashvini Yardi, besides the birthday cake’s bakers and confectioners, shared snapshots on social media. Arpita Khan and Aayush Sharma’s daughter turned one; Sallu clocked 55 years. Despite the current scenario, a carnival-themed bash was organised, which went on through the night.

Ayat’s birthday celebration is all over the internet. Friends and family members who attended the bash posted the party pictures on their social media account. Their Instagram stories tell a different tale about December 27, 2020.

Salman Khan was in no mood to celebrate his 55th birthday, and when asked about the same, the actor shared, “There are no celebrations this year. A lot of people from the industry have passed away. So, it doesn’t call for celebrations.” When paparazzi reached the actor’s Panvel residence, Salman Khan celebrated a low-key birthday with the media.

Apart from family members, B-Town folk Sunil Grover, Sooraj Pancholi, Zaheer Iqbal, Nikitin Dheer, Kratika Sengar, Ashvini Yardi, Mukesh Chhabra and Mudassar Khan drove down to Panvel to wish him. Politicians Praful Patel, Shaina NC and Baba Siddique were also present. So, it was not that there was no celebration, but a muted one.

On the professional front, Aayush Sharma and Salman Khan will be next seen together, sharing the screen space for Antim… The Final Truth. Mahesh Manjrekar will be helming the film, and ever since Aayush shared Salman Khan’s first look, the buzz around Antim has been tremendous. While Salman is seen donning a Sikh character, Aayush Sharma will play the role of a gangster in the film.

Apart from Antim, Salman also has Radhe: The Most Wanted Bhai and Tiger 3. Speaking about the third instalment of the popular action drama, it is said that Katrina Kaif and Salman Khan will start shooting in March 2021, after completing their current work commitments. It is said Kat and Sallu will fly to the Middle East for their next schedule, after wrapping up the first schedule in Mumbai.

Also Read: Saiee Manjrekar to have a small but significant role in Antim: The Final Truth