Arrangements in full swing for organising cockfights during Sankranti 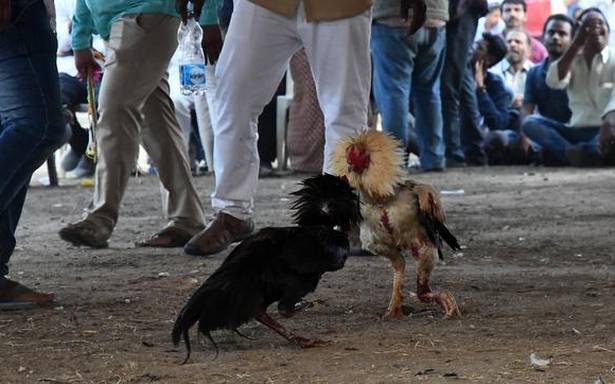 Arenas being readied, roosters prepared for the battle at many places in Andhra Pradesh.

With Sankranti, the biggest festival for farmers approaching fast, cockfight organisers are busy in making arrangements for the traditional game ‘cockfights’ (known as ‘Kodi Pandelu’ in local parlance). Flood lights, cockfight arenas, food stalls, VIP visits and punters carrying different varieties of roosters to the venues will be seen in villages during the three-day harvest festival, celebrated on a grand scale in Andhra Pradesh.

Celebrities, NRIs, public representatives, realtors, businessmen and film actors from U.S., Canada, Australia, Singapore and other countries, and from the neighbouring Karnataka, Tamil Nadu, Telangana and other States will throng the venues to enjoy the rooster fights.

Cockfights will be conducted at several places in the State. But West Godavari and Krishna districts are known for the tradition and arenas (also called ‘Kodi Pandela Barulu’) which will be arranged at more than 1,000 places in the two districts.

“There will be no Sankranti, also known as ‘Pedda Panduga’ without cockfights. The game will be organised like previous years but with all COVID-19 precautions this Sankranti. We will arrange the game in coconut orchards and in island villages,” said an organiser B. Raju of Veeravasaram in West Godavari district.

Some villagers and farmers were giving training to the fowls for the fight. Special training was being given to roosters for the last few months. A few villagers will train the roosters throughout the year.

“We feed the roosters with almonds, cashew, eggs, mutton and other special diet. Cocks in my farm practice for about five hours a day. We will give bath with hot water, train them in swimming and other techniques to enhance the stamina,” said trainer P. Ranga Rao of Attili village.

Fowls will be named as ‘Nemali’, ‘Dega’, ‘Hamsha’, ‘Kaki’, ‘Tella Nemali’, ‘Kaki Dega’ and other names, which will be fixed as per their colour, height and weight. Punters will buy the cocks as per the advice of astrologers.

“Organisers sell and buy fowls at high rates. Each fowl will be sold at ₹50,000 and above, and the highest price will be around ₹3 lakh. People from Karnataka, Telangana and other States will buy roosters from our farms,” said a villager of Gurvayipalem village in Krishna district.

Punters will invest in high stakes and crores of rupees will change hands during Bhogi, Sankranti and Kanuma festival days. For the last few years, organisers were making using of the online apps for transferring money.

Thousands of roosters will die in the battle and the meat of the dead bird, which was having good demand, is sold at ₹2000 and above in villages.

“Mostly, public representatives, businessmen and landlords will organise cockfights. Every year we celebrate the festival peacefully. We will enjoy cockfights with families. Last year we won about ₹20 lakh and lost ₹6 lakh,” a software engineer of Bhimavaram settled in Bangalore said.