Home News Arya Rajendran | From the classroom to Corporation

Arya Rajendran | From the classroom to Corporation 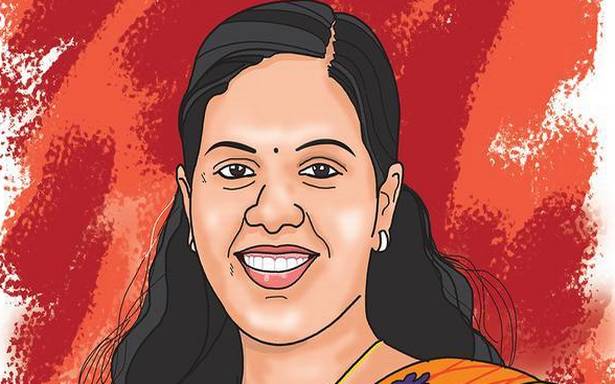 The 21-year-old B.Sc. student is set to become the Mayor of Kerala’s capital

Hardly a stone’s throw away from actor Mohanlal’s house at Mudavanmugal in Thiruvananthapuram is a narrow byline inaccessible by car where resides the newly-elected Corporation councillor of the division, Arya Rajendran, a 21-year-old B.Sc. Mathematics student of All Saints College in the city.

Her modest dwelling with a monthly rent of ₹6,000 will soon be a prestigious address in the capital city with the Communist Party of India (Marxist) State secretariat endorsing, in a day or two, the district formation’s recommendation of Ms. Rajendran as the next Mayor of Thiruvananthapuram Municipal Corporation where the Left front secured a simple majority in the recent elections. That will make her arguably the country’s youngest Mayor.

But she’s not a wide-eyed degree student gingerly taking the reins of the city administration as a debutant. The CPI(M) is believed to have counted on her performance record as State president of its children’s organisation, Balasangham, and in the State committee of its students’ wing, the Students’ Federation of India (SFI). The nomination is also in line with the party’s meticulous effort to reach out to the youth which worked to its advantage following the installation of V.K. Prasanth as the youngest Mayor of Thiruvananthapuram in 2015 when the burgeoning influence of the BJP in the Corporation area stared the Left in the face. His work won applause and he went on to wrest the Vattiyoorkkavu assembly segment from the Congress in a closely-fought triangular bypoll contest last year.

Ms. Rajendran is from a family of CPI(M) loyalists. Her mother Sreelatha, an insurance agent; her father Rajendran, an electrician; and elder brother Aravind, who’s recently secured job as an engineer in Abu Dhabi; are all members of the party’s Kesavadev Road Branch. After completing her schooling at Carmel Girls Higher Secondary School and at the Government Girls Higher Secondary School, Cotton Hill, she toyed with the idea of becoming an engineer for some time before taking up Mathematics.

Mayor or not, dropping out of college isn’t an option before her, as she looks forward to attending classes whenever possible and graduating with good grades. “But I think I will get to learn equally significantly outside the college, too, attending to civic concerns,” she told The Hindu.

Working with the Balasangham from a very young age, Ms. Rajendran rose in the ranks to helm it for the last two years when the crises faced by the State tested her organisational mettle, resolve and resourcefulness. Several Left organisations, including the SFI, closed ranks with the State administration to help set up community kitchens, arrange emergency medicines, create awareness about the pandemic protocols and pool funds to the Chief Minister’s Distress Relief Fund when COVID-19 sought to plough through the State, she pointed out.

Led by Ms. Rajendran, the Balasangham focused on addressing the mental health issues of students by engaging them in programmes tailor-made for them. Equal thrust was also given to continuing education online. To gauge the quality of online education, an extensive survey was also held among students, with the feedback helping its fine-tuning.

“The way the State, led by Chief Minister Pinarayi Vijayan, took on the unpleasant surprises and challenges of the last few years without batting an eyelid, is inspiring and reassuring,” she said. On her first day at the corporation to take oath as Councillor, veteran BJP leader Ashok Kumar walked over to her to congratulate her. “Political differences apart, being young helps strike a chord with everyone,” she said.

The roadmap has already been laid by her predecessors and the Left front’s election manifesto. She refuses to respond to sceptics who wonder whether she’ll just remain a mascot, with the party pulling the strings from behind.

“It’s best answered through actions,” she said, promising to discharge her duties in a consultative manner, with an ear to the ground and to the party’s counsel.

Fun-loving when with friends, Ms. Rajendran pores over contemporary Malayalam fiction when all by herself. K.R. Meera’s Arachar (Hangwoman) is her personal favourite for its firm woman protagonist, but Benyamin’s Aadujeevitham (Goat days) with its gut-wrenching account of a worker in the Gulf moved her to tears. Music is another pastime. She will be the third woman, all from the CPI(M), to helm the urban local government in the capital and she’s proud of the legacy. “The effort will be to take everyone along,” said Ms. Rajendran.