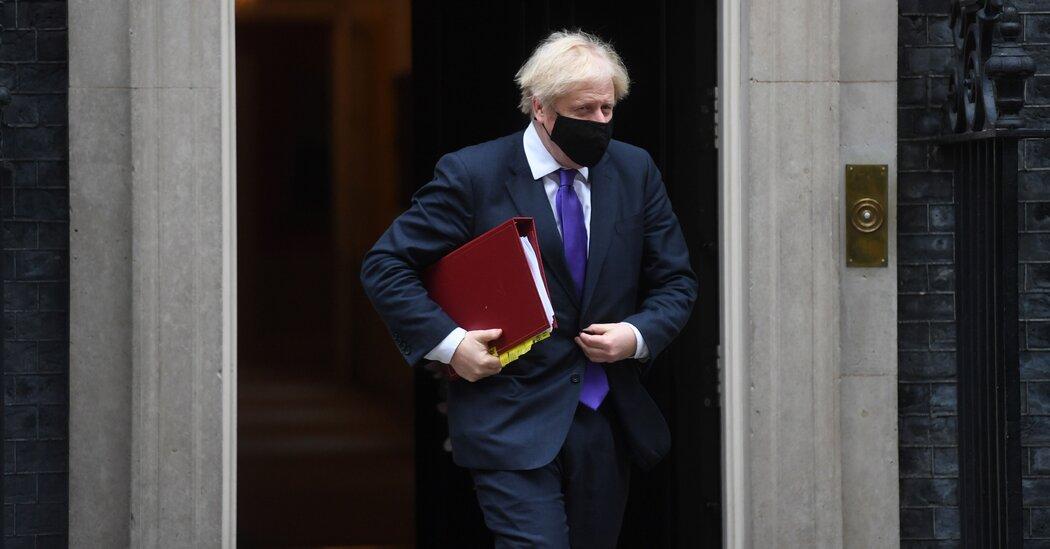 LONDON — With time running out and the gaps still wide, Prime Minister Boris Johnson took personal control of the Brexit negotiations on Monday, declaring that he would travel to Brussels later this week for a last-ditch effort to strike a trade agreement between Britain and the European Union.

Mr. Johnson’s announcement, after a 90-minute phone call with the president of the European Commission, Ursula von der Leyen, raised the stakes as the talks enter their endgame. After 11 months of grinding negotiations, it appears, only a face-to-face meeting of political leaders can produce a breakthrough.

“We agreed that the conditions for finalizing an agreement are not there,” Mr. Johnson and Ms. von der Leyen said in a statement, adding that they had asked their negotiators to “prepare an overview of the remaining differences to be discussed in a physical meeting in Brussels in the coming days.”

The key sticking points, they said, were fishing rights, and state aid and fair competition for industry — issues that have divided the two sides from the start.

Analysts welcomed Mr. Johnson’s readiness to jump in, which came after days of intensive negotiations that had failed to narrow the gaps. With a deadline of Dec. 31 to conclude a deal, there were growing fears that the talks might end in failure, throwing Britain’s relationship with the 27-nation bloc into flux.

“Would Boris Johnson really go to Brussels if there were no longer any hope?” said Mujtaba Rahman, an analyst at the political risk consultancy Eurasia Group. “It is the moment either for a deal, or for a final attempt to demonstrate that both sides have tried very hard to to get to a deal that was ultimately out of reach.”

If Mr. Johnson’s talks with Ms. von der Leyen were to fail to break the impasse, Britain’s strategy, he said, would be to put the issue on the agenda of E.U. heads of government, who are gathering in Brussels on Thursday.

That reflects a belief that the negotiators have achieved as much as they can, and that a new political impetus is needed to break the deadlock. But Mr. Rahman warned that if Britain saw it as an opportunity to try to fracture the unity of the E.U. member states, that would likely backfire.

Britain left the European Union in January, but little has changed yet because it remains tied to the bloc’s trade rules through the end of the year. That arrangement was supposed to give London and Brussels time to hammer out a long-term trade agreement.

Failure to strike a deal would compound the damage done by the coronavirus pandemic on both sides of the English Channel. But it would have far greater implications in Britain, where it would mean new trade barriers with the country’s biggest partner, as well as potential friction with the United States.

Even with a deal, there will be more checks on goods at border points. The British intend to phase in most of these controls over six months to limit disruption, but France is unlikely to do the same, which could leave cross-Channel ports clogged and ferries stranded.

On Monday, Downing Street accepted that food prices would likely rise in Britain without a trade deal, though it argued these hikes would be modest. Food importers have warned that some products, including some fruit and vegetables, could disappear temporarily from grocery shelves.

Tariffs could have a devastating impact on some sectors and put the government under enormous pressure to step in to provide compensation. Among the hardest hit would be sheep farmers, whose exports of lamb to the European Union would be hit by tariffs likely to average around 48 percent.

Some automakers are warning that the imposition of export tariffs could make their business untenable. Even with a trade deal, they could face problems, depending on the fine print of the agreement and specifications of what proportion of non-British components they are allowed to use in manufacturing.

“Take a moment to step back from the details and reflect on the sheer absurdity of breaking away from our nearest neighbours, who take 45 percent of our exports, without even a basic trade deal,” wrote Peter Ricketts, a former British national security adviser, on Twitter.

There would be problems on the European side, too, particularly for Ireland, whose economy is linked closely to Britain’s. German, French, Dutch and Belgian companies would suffer as well, though the pain would likely be more spread out, reducing its impact in any single country.

That has led European diplomats to conclude that Britain holds the weaker hand, particularly as its prospects of striking a trade deal with the United States have dimmed since Joseph R. Biden Jr. became president-elect.

Nonetheless, Mr. Johnson’s ultimate decision on any possible deal probably depends on his calculation of the blowback from his own restive Conservative Party backbench lawmakers. The pro-Brexit faction forced out Mr. Johnson’s predecessor, Theresa May, and has warned Mr. Johnson he has limited room for maneuver.

“The hard-line minority in Johnson’s party wield a lot of weight, especially when they play on the sovereignty heartstrings,” said Bobby McDonagh, a former Irish ambassador to Britain. “There is a view of sovereignty in London that is hard to come to grips with because it doesn’t seem to take account of the sovereignty of other countries.”

On Monday, the Johnson government brought back to the House of Commons a bill that would renege on parts of its withdrawal agreement with Brussels that relate to Northern Ireland — a reversal that has infuriated many European officials. The House of Lords had rejected parts of the legislation, which the government acknowledges violate international law.

But in separate meetings, British officials extended an olive branch, telling European Union officials that they would strike the offending language from the legislation if the two sides struck a trade deal.

Britain’s treatment of Northern Ireland is also important to its relationship with President-elect Biden. He expressed concern during the campaign that Mr. Johnson’s negotiating tactics could threaten the Good Friday Agreement, which settled decades of sectarian violence in Northern Ireland.

The terms of Britain’s trade relationship with the United States will not change, with or without a Brexit deal. It will be covered by World Trade Organization rules, as it was before Brexit.

Mr. Biden has ruled out new trade agreements with any country until the United States improves its own competitiveness. Trade experts warned that Britain could be handicapped in other ways if the talks with Brussels ended in failure.

“If there is no U.K.-E.U. deal, it will make it very difficult to reach agreement with the U.S., including on such basic topics as rules of origin, agriculture trade and food safety,” said Daniel M. Price, a former top trade adviser to President George W. Bush.