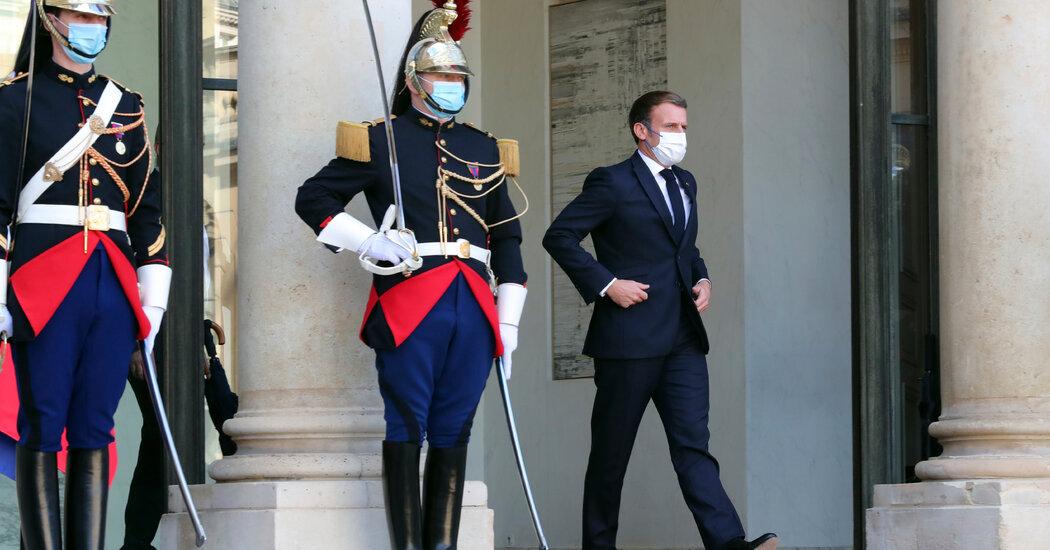 BRUSSELS — Donald Trump’s presidency was marked by exceptional contempt for European allies and the NATO alliance. But it also forced European nations to consider if they had become too dependent on the United States for leadership and their own security, and to ponder how far they were willing to go to defend themselves.

But President Trump is leaving. And the prospect of his departure has reopened old fissures between key European allies, with considerable doubts about what just months ago looked like a determined turn toward greater European ambition and integration.

The most immediate consequence has been a bitter squabble between France and Germany over the future of European defense and strategic autonomy, displaying the different anxieties of two countries central to the functioning of the European Union.

The spat has included an unusually personal attack by the French president, Emmanuel Macron, on the German defense minister, Annegret Kramp-Karrenbauer. He even suggested that she, a favorite of Chancellor Angela Merkel, was out of step with the chancellor, which German officials and analysts strongly deny.

The dispute is a measure of the raw feelings stirred by Mr. Trump’s presidency, which raised doubts about America’s long-term commitment to global leadership and European security that a Biden presidency is not likely to erase.

Those attitudes helped Mr. Macron push the idea of European “strategic autonomy” from a changed United States, one it sees as no longer willing to bear the burdens of global leadership, no matter who is president.

Mr. Macron’s worry, French officials and analysts say, is that a friendly Biden presidency will put Europe — and more important Germany, its largest and richest nation — back to sleep, content to shelter under the American umbrella and reluctant to commit to a more forceful European voice in the world.

Yet it is Ms. Kramp-Karrenbauer, commonly known as A.K.K., who is the German official most vocal about the need for Germany and Europe to take defense more seriously, said Claudia Major, a senior defense analyst at Germany’s Institute for International and Security Affairs.

“To have this counterproductive and toxic debate doesn’t help us at all,” Ms. Major said. “Macron is focusing on the wrong issue. The question in Germany is not whether we’re Atlanticist or Europeanist, but whether we take on more responsibility for defense or not, and A.K.K. wants to do more.”

The debate is important, said François Heisbourg, a French security analyst, “because it displays in a naked fashion the discrepancies between French and German perceptions, as proxies for a broader European division.”

The two countries have very different starting points, he said, with different views of the centrality of trans-Atlantic dependency. “But in substance — the need to do more — there’s not so much difference.”

Wolfgang Ischinger, a former German ambassador to Washington who runs the Munich Security Conference, said: “This is the single most unnecessary quarrel I’ve witnessed between Germany and France in a decade.”

A moment’s thought, he said, “would tell you that A.K.K. is Macron’s closest ally in Germany in strengthening European capabilities, and whether you call it autonomy or a better partner of the U.S. in NATO, it’s just a quarrel about words, not about meaning.”

The argument was roughly the same as the one Charles de Gaulle and Konrad Adenauer had to handle after World War II, Mr. Ischinger said. “The French are challenging a bit the need to have America here and Germans say, ‘I can’t live without the security of the Americans, so strengthen Europe to be a better partner.’”

Germany also considers the American security umbrella crucial for European balance, to keep Central and Eastern Europeans committed to NATO and the European Union itself, said Daniela Schwarzer, director of the German Council on Foreign Relations.

“The Germans want to frame increased European military efforts as part of trans-Atlantic cooperation, as a message to the U.S., but also to Central and East European countries” that only trust U.S. security guarantees against Russia, she said.

“Germany wants to be as inclusive as possible in Europe while the French are far more ready to move ahead with a smaller number of countries,” Ms. Schwarzer said. “You see this with defense but also with the coronavirus recovery fund.”

Jana Puglierin, director of the Berlin office of the European Council on Foreign Relations, notes that NATO and the European Union are fundamental to Germany in a way they are not to France, which maintains its own nuclear arsenal.

“If you take NATO or the E.U. away from France, the French could do coalitions of the willing. Take them away from Germany and we feel naked,” Ms. Puglierin said. “The idea that NATO collapses frightens us.”

The problem, she said, came when Mr. Macron insisted that he wanted to stay in NATO, but wanted strategic autonomy as well as good relations with the United States. “Germans are not sure how that would work and no one has explained it,” she said. “So we don’t really buy it.”

Mr. Macron, criticized for his handling of the pandemic, is feeling unsupported by his allies, Mr. Heisbourg suggested. Mr. Macron sees France as in a war with radical Islamists, both at home and in North Africa, and has been attacked for his responses by Muslim nations, especially the Turkey of President Recep Tayyip Erdogan.

Mr. Erdogan has insulted Mr. Macron, claiming to speak in the name of Islam, and is exercising military power in the eastern Mediterranean at the expense of Greece and Cyprus, in Libya and in Azerbaijan, against French allies.

Yet Germany has been trying to mediate between Turkey and the E.U. members Greece and Cyprus, “as if they are equal,” Mr. Heisbourg said, which has infuriated Mr. Macron.

France and Germany are also fighting about the future of a joint military project, a new fighter jet, which is not going well, according to Ms. Major and Christian Mölling, writing in Le Monde.

The project is intended to show “that European sovereignty is possible, and that Paris and Berlin are carriers of this ambition,” they write. “This also means that if this flagship project fails, the greatest damage will be political, not economic.”

The larger rift began when Ms. Kramp-Karrenbauer sparked Mr. Macron’s ire in a speech, which she followed with an op-ed piece in Politico, in which she stated bluntly: “Europe still needs America.”

“Illusions of European strategic autonomy must come to an end: Europeans will not be able to replace America’s crucial role as a security provider,” she wrote.

Mr. Macron clearly took that as a direct rebuttal of his own arguments for strategic autonomy, and therefore of his efforts to position himself at the center of European leadership in the waning days of Ms. Merkel’s time in office.

He responded in a lengthy interview 10 days later. “The question, if we are straightforward, is the following: Is the change in the American administration going to see Europeans letting up?” he said.

Then he singled out Ms. Kramp-Karrenbauer for special criticism, saying he “profoundly” disagreed with her opinion piece. “I think that it is a historical misinterpretation,” Mr. Macron said. “Fortunately, if I understood things correctly, the chancellor does not share this point of view.”

The United States, Mr. Macron continued, without ever mentioning Mr. Biden’s name, “will only respect us as allies if we are earnest, and if we are sovereign with respect to our defense.” A new administration, he added, was an opportunity for Europe “to continue to build our independence.”

Ms. Kramp-Karrenbauer then gave another speech last week to students at Germany’s military academy in which she again argued that the best way to maintain America’s security commitment to Europe was “to do more for our own security.”

“The French President has recently made that same observation — and I agree,” she said. But she did not back down, adding that “relying exclusively on the E.U. would create a divide in Europe.”

On Tuesday, asked directly whether Ms. Merkel and Mr. Macron were in agreement, Ms. Kramp-Karrenbauer said bluntly: “I did not hear the chancellor say that NATO was superfluous.”

Ms. Puglierin said it was time to move on from “this very stupid debate.”

“The Americans expect us to come up with something,” she said, “and not wait like children.”

Elizabeth Boykewich Exits As Head Of Casting & Talent For Freeform

Iran, China, Russia, and Europe will discuss possible US return to nuclear deal