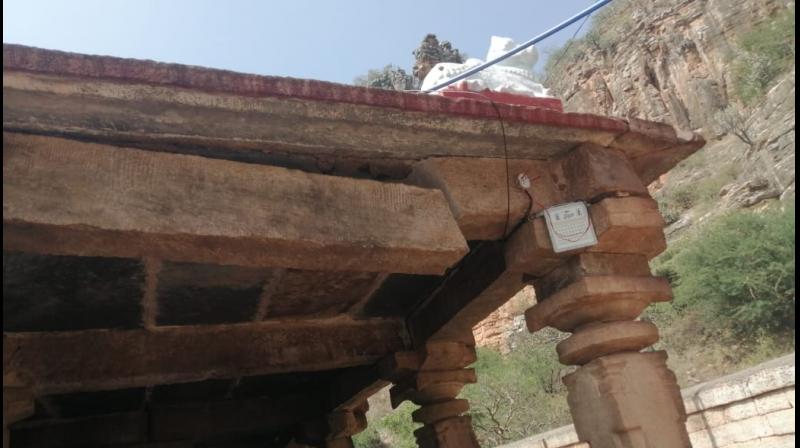 The Yaganti temple in this district, which was damaged recently, is a nationally protected monument and the rock stone cannot withstand seismic vibrations from mining blasts, she noted here on Thursday.

Speaking to Deccan Chronicle from her Bengaluru office, Dr Maheswari said: “We are deeply shocked at the damage caused to the temple due to mining blasts in the proximity of the temple. “It is the duty of the government to protect heritage and preserve such buildings for posterity,” she said.

“Yaganti temple rocks cannot withstand impactful vibrations. They are feeble rocks and must be protected from external damage,” she said.

Dr Maheshwari said the area in and around the temple has limestone deposits of high quality. “We are not objecting to the government exploiting mineral resources but what is appalling is that the heritage of this nation is being destroyed by such policies of governments.”

Narrating the experience of preserving the Shiva Parvathi Karthikeya temple in Ballari district of Karnataka where iron ore was mined, she said the ASI prevailed upon the state government to use latest technologies like lower-pressure blasting without vibrations, as is developed by the National Institute of Rock Mechanics.

“I appeal to the government of Andhra Pradesh to deploy such systems when mining is done near the Yaganti temple too.”

She thanked Deccan Chronicle for highlighting the plight of the temple damaged by mining blasts.

“The government of AP is not supposed to do mining in ways that would damage national heritage. They should stop open mining systems.”

Dr Maheshwari said some 15 years back, a bridge was built by locals connecting the Shiva temple and Vishnu temple. This was against the rules of protection of monuments though they argued that this would help pilgrims move between the two temples. “Later, the bridge collapsed. Again we had to do a lot of conservation to bring it back to operation,” she said.

RELATED:  Donald Trump is gone from Twitter. So are his claims that 'California is going to hell'