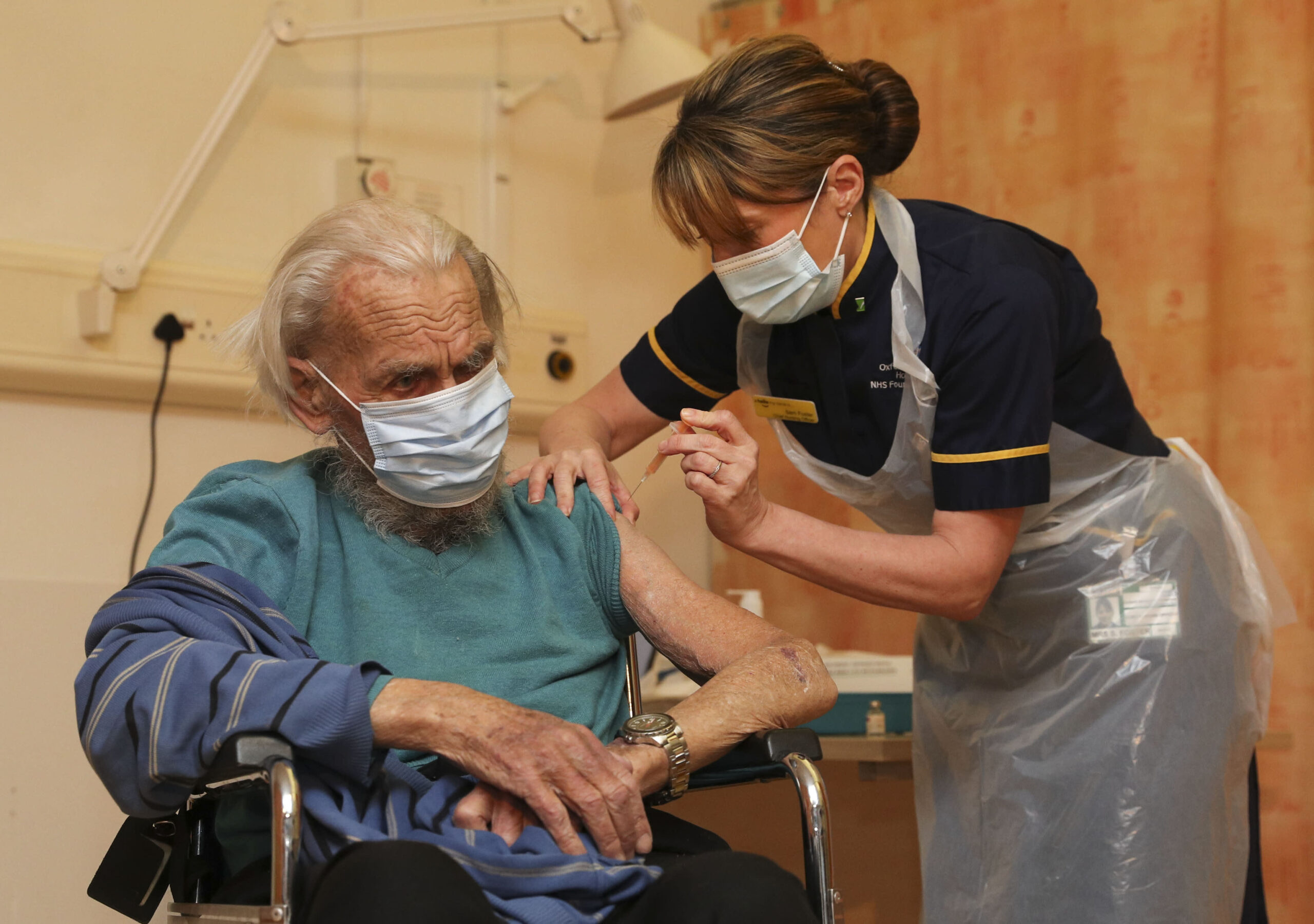 A health worker shows a vial of AstraZeneca-Oxford’s Covid-19 coronavirus vaccine, at Patan Hospital near Kathmandu on January 27, 2021.

The U.K.’s decision to delay the second shot of the AstraZeneca-University of Oxford coronavirus vaccine has been found to be an effective strategy, according to the results of a new study.

Researchers at the University of Oxford found that the Covid-19 vaccine was 76% effective at preventing symptomatic infection for three months after a single dose, and in fact that the efficacy rate rose with a longer interval before the first and second doses.

“Vaccine efficacy after a single standard dose of vaccine from day 22 to day 90 post vaccination was 76% … and modelled analysis indicated that protection did not wane during this initial 3 month period,” the study, under review at The Lancet medical journal and published on Tuesday as a preprint, found.

“These analyses show that higher vaccine efficacy is obtained with a longer interval between the first and second dose, and that a single dose of vaccine is highly efficacious in the first 90 days, providing further support for current policy,” the report said.

The U.K.’s current strategy is to vaccinate as many people as possible with a single dose first and to delay the second dose for up to 12 weeks; the idea being that a first dose provides at least some partial protection and allows more people to access the vaccines while they are in limited supply.

The decision to delay giving people a second, booster dose has provoked controversy, and some questioned whether it could lower the efficacy of the vaccine at preventing serious Covid-19 infection.

However, the U.K.’s Joint Committee on Vaccination and Immunisation, supported the approach. The U.K. is also delaying the second dose of the Pfizer-BioNTech vaccine, a move that the vaccine makers have warned against, arguing that there is no data to support a delay.

The study also provided important data on whether the vaccine reduces transmission of the virus, a previous unknown and a crucial question for policymakers looking to lift lockdown measures that have crippled the economy.

Based on weekly swabs from volunteers in the U.K. study, it found a 67% reduction in transmission after the first dose of the vaccine.

This latest study supports the U.K. government’s decision, concluding that vaccination programs “aimed at vaccinating a large proportion of the population with a single dose, with a second dose given after a 3 month period, is an effective strategy for reducing disease, and may be the optimal for rollout of a pandemic vaccine when supplies are limited in the short term.”

The study used further data on ongoing clinical trials into the vaccine. A separate announcement from AstraZeneca on Wednesday showed that the vaccine also prevented serious illness from Covid-19, with no severe cases and no hospitalizations more than 22 days after the first dose.

The vaccine was approved by the U.K.’s drug regulator on Dec. 30 and, as a shot produced in Britain, makes up the bulk of the nation’s immunization program, which has been hailed as a success so far.

The U.K. is on track to have vaccinated its top four priority groups (the over-70s, residents and staff in elderly care homes, frontline health and social care workers and the clinically extremely vulnerable) numbering around 15 million people by mid-February.

As of Feb.1, over 9.6 million people had received a first dose of the vaccine, and just under 500,000 had received two doses, according to government data.

Professor Andrew Pollard, chief investigator of the Oxford vaccine trial, and co-author of the study, said “these new data provide an important verification of the interim data that was used by more than 25 regulators including the MHRA and EMA to grant the vaccine emergency use authorisation.”

“It also supports the policy recommendation made by the Joint Committee on Vaccination and Immunisation for a 12-week prime-boost interval, as they look for the optimal approach to roll out, and reassures us that people are protected from 22 days after a single dose of the vaccine.”

The researchers also hope to report data regarding the new coronavirus variants in the coming days, and expect the findings to be broadly similar to those already reported by fellow vaccine developers: That the current vaccines do work against mutations of the virus.

Germany, France and Sweden are currently not recommending the AstraZeneca vaccine to over-65s, saying there is not enough trial data on this age group. The vaccine maker and U.K. government have defended the jab, however, and say the data that is available shows it is safe and effective, with more analysis set to become available soon.