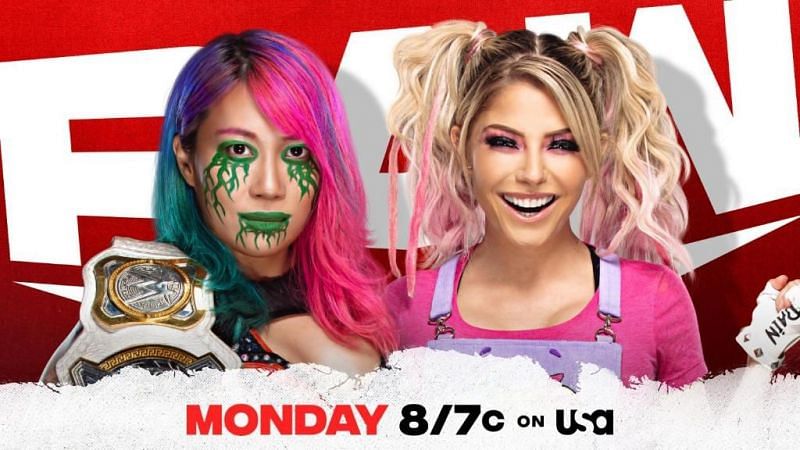 Last week on WWE RAW, Alexa Bliss defeated Asuka in a non-title match in the main event of the show. Thanks to that victory, the two will face off again this week. But this time, the WWE RAW Women’s Championship will be on the line.

WWE confirmed the match on Sunday on its Twitter page. Asuka currently holds the WWE RAW Women’s Championship. She won the title at WWE SummerSlam. Meanwhile, Bliss has been riding a lot of momentum since she joined forces with The Fiend.

Asuka is not currently scheduled to have a match next Sunday at WWE Royal Rumble. Instead of putting this match on the pay-per-view, the company has added it to the card for this week’s episode of WWE RAW.

“The Empress of Tomorrow” captured the title when she defeated Sasha Banks at WWE SummerSlam 2020. Bliss is a three-time champion, but she last held the gold in 2018. She’ll be looking to capture her sixth overall singles title by defeating Asuka.

Many fans are surprised that Asuka isn’t scheduled to compete at WWE Royal Rumble. Her lack of a match on the card could be explained by a potential WWE Women’s Tag Team Championship Match that is planned for the show.

Asuka and Charlotte Flair currently hold the WWE Women’s Tag Team Championship, and they could defend the titles against Shayna Baszler and Nia Jax. The company may have wished to avoid having Asuka pull double duty at the pay-per-view.

Are you looking forward to Asuka’s title match with Bliss? Do you think the title will change hands? Leave your thoughts in the comments section below.