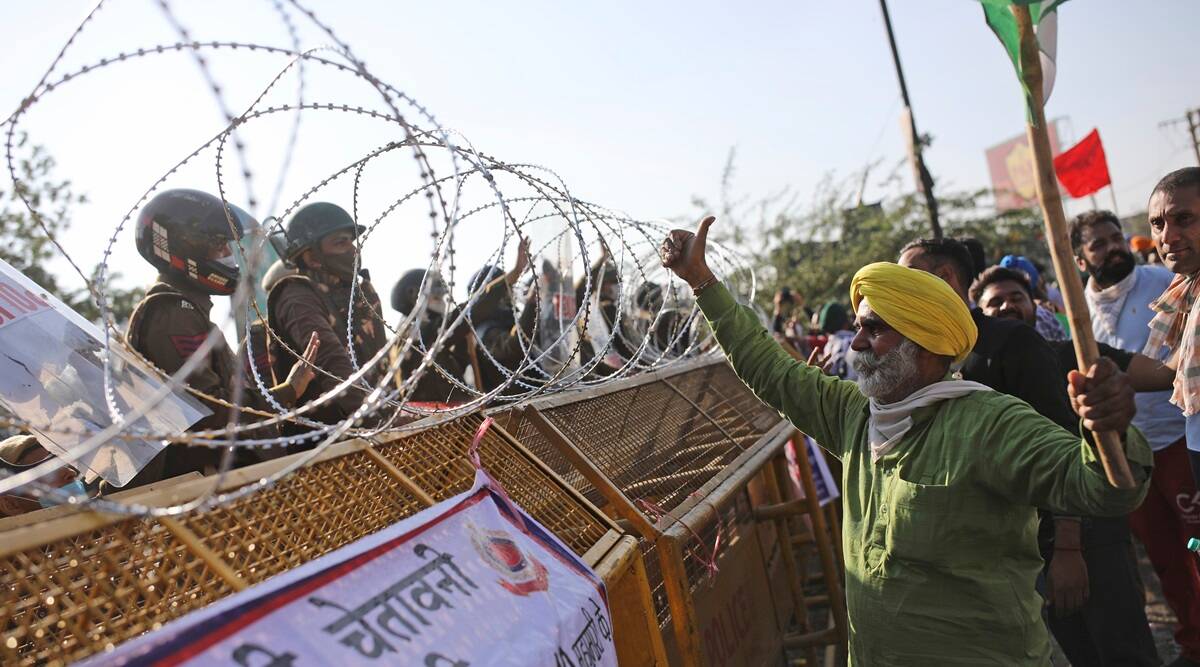 
An elderly farmer argues with policemen standing by a barricade as they attempt to move towards Delhi, at the border between Delhi and Haryana state, Friday, Nov. 27, 2020. (AP Photo: Altaf Qadri)

The daily sermon from the historical Manji Sahib gurdwara, inside the Golden Temple complex, on Monday saw the priest urge farmers to keep their struggle against Centre’s farm laws non-violent.

Giani Pinderpal Singh, while explaining the daily edict from the Guru Granth Sahib, read at Golden Temple on the birthday anniversary of Guru Nanak Dev Ji, said the sangat should pray for protesting farmers fighting for their rights in Delhi.

Touching briefly on issue of farmer protests, he said, “I will request you to not drive anything political out of what I am going to say. Young and elderly farmers, who want to say something about their rights are sitting on outskirts of Delhi. You all should pray for them on the occasion of birth anniversary of Guru Nanak Dev Ji. You must request the almighty that all the protesters are blessed with dedication and patience as was displayed by Sikhs in Guru Ka Bagh and Jaito Da Morcha.”

RELATED:  How women farmers are the backbone of the anti-farm law protests: In conversation with Jasbeer Kaur of Punjab Kisan Union - India News , Firstpost
RELATED:  Ten infants killed in hospital fire in India

Guru Ka Bagh and Jaito Da Morcha were organised by Shiromani Akali Dal and Shiromani Gurudwara Parbandhak Committee against British government in 1922 and 1924, respectively. Both agitations were part of gurdwara movement and these were exemplary non-violent movements. Sikh protesters were beaten and the administration’s oppression made headlines in UK and US newspapers of that time. Chilling details of merciless beating of Sikh protesters and their patience in face of such brutal action against them was also recorded in videos.

“May almighty bless them (protesters) with patience and success. I pray that they would bear the oppression as they are children of Guru Arjun Dev Ji,” said the priest.

Manji Sahib has remained an important gurdwara in driving the narrative within the community. It is a place where religious as well as political gatherings have been held in the past.

Robert Saleh is ready to J-E-T-S.Image: Getty ImagesI do not understand. This...
Read more

Prachi Desai spotted on a wheelchair at the airport, the actress was seen with a bright smile even though she had a injury, SEE...