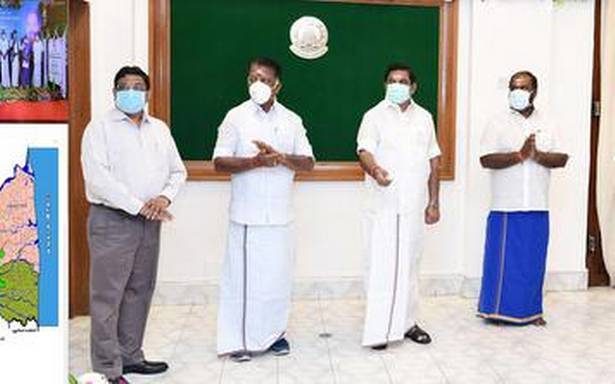 Special Officer R. Lalitha assumed charge as the first Collector of the new district, in the presence of Textiles Minister O.S. Manian, at a function on Monday

The 38th district of Tamil Nadu, with Mayiladuthurai as its headquarters, came into being formally on Monday with Chief Minister Edappadi K. Palaniswami inaugurating it through a video-conference from Chennai.

Over the last few weeks, there was a sense of discomfort among people since the Assembly elections are only a few months away and the delay in the procedure for formalising the jurisdiction of the new district carved out from Nagapattinam, could have led to an indefinite postponement in the event of the election code of conduct taking effect. On Monday however, there was huge sense of relief was palpable among a cross-section of the public and the formation of the new district was welcomed with bursting of crackers.

The new district Collectorate will function out of the buildings on the premises of the Commercial Taxes Department. The government will shortly release funds for establishing the Collectorate complex and the District Police Office at the 26-acre site being offered by the Dharmapuram Adheenam, Mr. Manian said, adding that the new district would offer immense convenience to the people.

The economy of the new district, with a jurisdiction over 1,172 sq km will mainly be driven by the agricultural and fisheries sectors and partly by temple tourism, official sources said.

According to the latest statistics, the new district with a population of 9,18,356 will account for 1,65,550 acres of cultivable land and and 26 fishing villages. The four taluks are Mayiladuthurai, Sirkazhi, Kuthalam and Tranquebar.