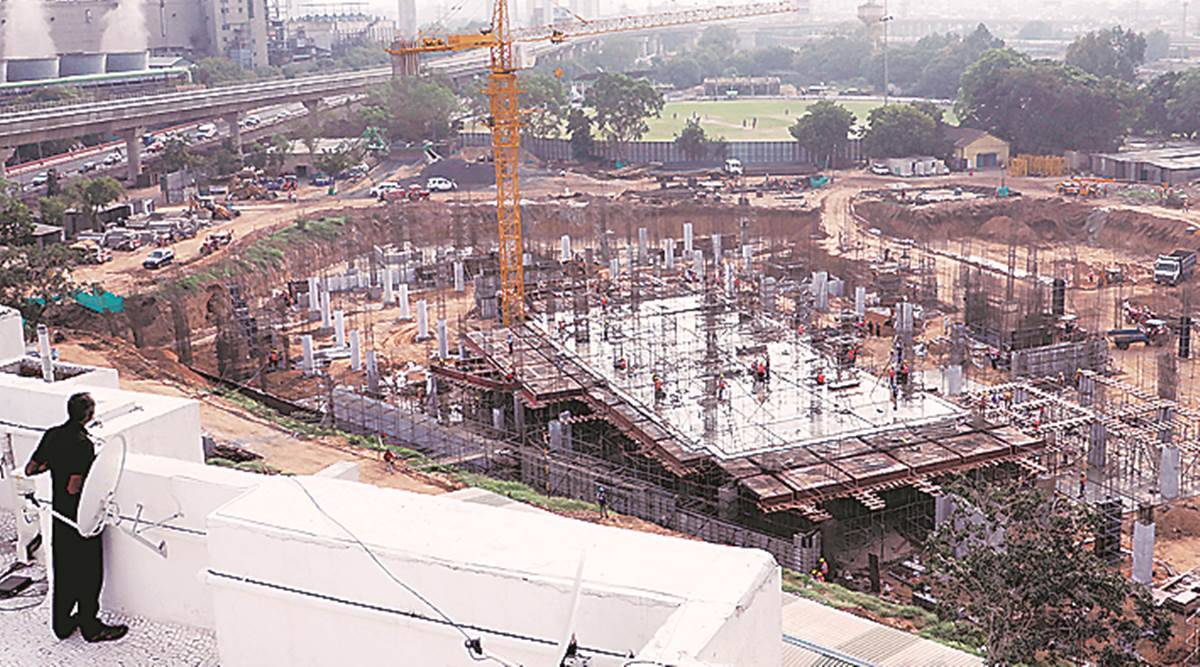 
Work is on at the Sabarmati hub of the bullet train. (File photo)

AS the corporation building the country’s first bullet train project pushes for Indian firms shouldering three-fourth of the work, Indian industry has been urged to come up with an alternative to the high-tech machines needed to construct viaducts (elevated structures) at the desired pace, which are currently made only in China. Trade with China has been affected by the border tension in eastern Ladakh.

The mega carrier and launcher machines, also known as Transporter, Gantry and Full Spam Launcher machines, are ubiquitous in China’s large-scale connectivity projects. Typically, a vehicle carrying a full girder travels on an already launched girder to place the next girder under this technology. The speed is almost seven times that of the girder launching mechanism commonly used in India — while one-and-a-half girders are placed in a week with this, the Chinese machines enable two girders a day.

Each machine costs around Rs 70-80 crore. The bullet train project will need up to 30 such machines, Achal Khare, Managing Director of the National High Speed Rail Corporation (NHSRL), said.

“If we are to build 237 km in four years, there is no other way except to use this technique. But these carrier-and-launcher machines are manufactured in China. So this is one of the challenges which we have posed to the industry, including L&T (which is building 325 km of a high-speed viaduct in Gujarat) and the academicians, that why can’t we develop them rather than importing them from China?” Khare told a meeting of the industry body. The Indian industry doesn’t have any experience of building high-speed rail systems.

Procuring these machines was common earlier. “I guess people here never needed to apply their minds to make them because they were available cheap in China. Now we are telling people to try and design them, let’s be self reliant. It’s not like Indian engineers cannot make it,” Khare told The Indian Express, adding that given the current “situation” and the government’s emphasis on Aatmanirbhar Bharat, it was unlikely anyone would get these machines from China. “I think people will try to develop these machines here, and that is good. How else will we become self-reliant?”

Khare acknowledged that the machines are “no joke”. “They are vehicles capable of carrying loads of 1000 tonnes-plus. Currently, girders are carried by road in little segments.” Noting that even Japan, which is helping India with the bullet train project, had not designed such machines, Khare said China came up with them over its construction of 25,000 km of high-speed rail.

Similarly, the NHSRCL has asked the Ahmedabad Textile Research Institute to work on developing upholstery similar to the fire-retardant one used in Japan’s high-speed Shinkansen system. “They say that even if you pour petrol on the upholstery and set it on fire, it will not propagate. We cannot be dependent on Japan forever for this,” Khare said.

Besides, at the behest of the NHSRCL, several IITs are making simulation software for electrical systems etc which are currently the sole domain of foreign consultants engaged in railway and other such projects. Engineering institutes and the industry have also been asked to study ballastless track, to replicate the Shinkansen technology.

The NHSRCL plans to hire management professionals and send them on secondment to JR East, which runs the Shinkansen, so that they learn how the system is managed and come back and replicate that “culture” in India.

In the latest understanding reached with the Japanese side, India is to carry out around 75% of the construction for the project through Indian firms. Typically, in projects of such a scale, around Rs 80,000-90,000 crore worth of contracts, mostly in civil construction and even track-laying, would go to Indian companies. The bullet train project, without normal inflation factored in from 2015, is estimated at Rs 1.08 lakh crore.

The NHSRCL has told Indian contractors to ensure that their staff, from rail-welding technicians to engineers, motor car operators and supervisors, get trained and certified by a reputed Japanese agency. The training sessions can last from a few days to 125 days, and the cost has to be borne by the contractors.

The project is facing delays as land acquisition is progressing at a snail’s pace in Maharashtra and there are pending issues with the Japanese. However, the portion in Gujarat has picked up pace with three contracts awarded for design and construction. While the Railways insists the project is still on time for the December 2023 deadline, sources said they are staring at a completion date of December 2028.