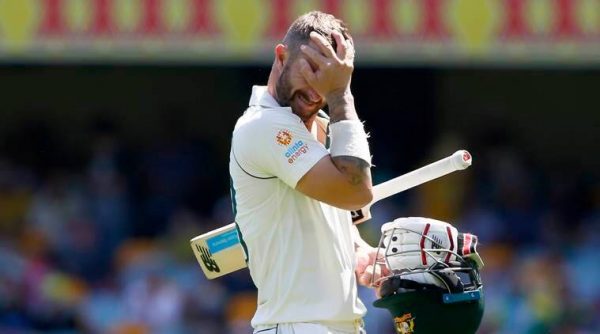 Matthew Wade, who opened for the first two Tests against India has been dropped from Australia’s squad for the upcoming Test series against South Africa. Alex Carey has replaced Wade in the 19-member squad for the three-match series while Wade will now travel with the T20I side for the five-match duel.

Apart from Carey, the squad also includes four more uncapped players in Sean Abbott, Michael Neser, Mitchell Swepson, and Mark Steketee. Meanwhile, Matthew Wade’s snub comes after his poor run in the Border-Gavaskar Trophy. The southpaw in four Test and eight innings against India at home, averaged just 21.62 with 173 runs coming from his bat. He got several starts – and crossed the 30-run mark four times – but failed to convert every single one of those.

“The squad is quite similar to that selected for the final two Tests of the recently-completed Border-Gavaskar series, with the exception of Matt Wade, who will join the Australian men’s T20I squad in New Zealand, and the addition of Alex Carey, who has been in strong form with both bat and gloves,” Trevor Hohns, the national selector, said.

Speaking about the T20I squad, Jhye Richardson, who last played a T20I in February 2019, has impressed in the Big Bash with 27 wickets in 14 matches has made a return to the Australia team. The selectors have also included 19-year-old Tanveer Sangha after his impressive performance with Sydney Thunder, where he has 21 wickets from 14 games.

“The batting line-up will be strengthened by the inclusion of Matt Wade, who joins fellow experienced internationals such as Aaron Finch, Glenn Maxwell, Marcus Stoinis, D’Arcy Short, and Ashton Turner,” Hohns pointed out.

“Adam Zampa has developed into one of the best spinners in international white-ball cricket and we have been most impressed by Tanveer Sangha, who has been brilliant throughout the pathways and with the Sydney Thunder this season,” Trevor Hohns added.

Meanwhile, the squad will leave for New Zealand on February 7, the tour to South Africa