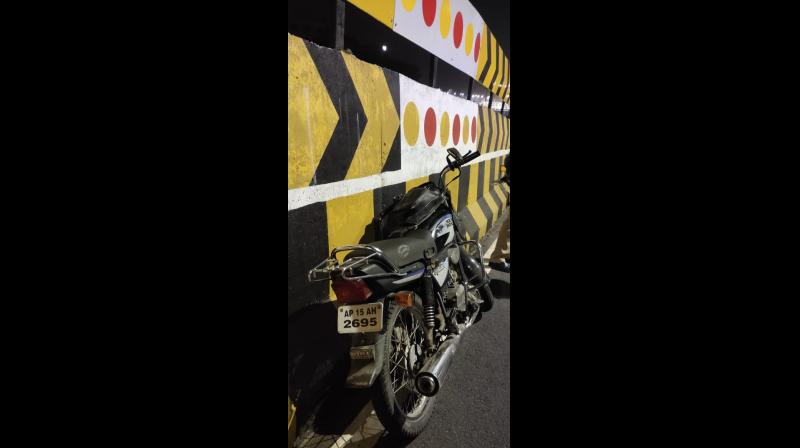 Hyderabad: A BTech final year student was killed and two others were injured when their bike crashed into a road divider on the flyover leading to the Durgam Cheruvu cable-stayed bridge early on Thursday morning.

Police said they were riding under the influence of alcohol and going to see the bridge at 3.30 am after celebrating a birthday party at Yousufguda when they met with the accident.

The victim was identified as V. Shiva, 20, and the survivors as G. Vijay and Y. Prashant. Shiva, who was riding the bike (AP15 AH 2695) at the time of the accident, did not have a driver’s licence. None of them had their helmets on.

Shiva’s samples have been sent to a laboratory to check his blood alcohol count (BAC). The BAC of Vijay was measured at 54 and that of Prashant, whose birthday the trio was celebrating, 80.

Shiva was a native of Sircilla and staying with Shiva and Prashant, both unemployed graduates, at Yousufguda, Madhapur inspector P. Ravindra Prasad said. He said the three of them sustained injuries and Shiva succumbed on the spot. Shiva’s family donated his eyes after his death, the inspector said.

Following a complaint, cases were booked against Vijay and Prasanth by the Madhapur police under Section 304-II (culpable homicide not amounting to murder) read with 109 (abetment to committ and offence) of the IPC along with Sections 184, 185 and 188 of the Motor Vehicles (MV) Act.

“The sections booked against the boys are non-bailable offences and they might face 10-plus years of jail time,” police said.

Raghunandan Rao, Madhapur assistant commissioner of police, said this was the third fatal accident reported at the same place in the last two months. He said that GHMC officials were notified to check the engineering defects.