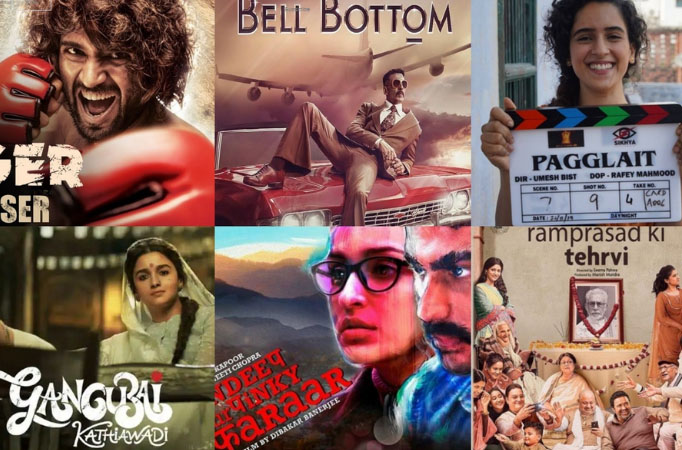 MUMBAI:  Bollywood never misses a chance to sensationalise, to gran a few extra eyeballs. This year, makers seem to have hit the idea of quirky titles. Liger to Looop Lapeta, Pagglait to Bell Bottom, and Gangubai Kathiawadi to Ramprasad Ki Tehrvi, names of films really take an unusual turn this year.

Quirky titles bordering on being tongue-twisters, of course are not new to Bollywood. In the past, the industry made Chalti Ka Naam Gaadi, Badhti Ka Naam Dadhi, Jal Bin Machhli Nritya Bin Bijli, Allah Meherban Toh Gadha Pahelwan and Dhoti Lota Aur Chowpatty (the list could be endless, really).

IANS lists some recent titles that render the films in question a dash of added audience interest.

Imagine a cross breed between a Lion and Tiger! That’s Vijay Deverakonda for you — at least in spirit, going by the title of his next film. The poster and title created a frenzy on social media upon launch. Going by the first look, it seems the reason behind the name is because the lead character is a fierce boxer. The film is all set to release on September 9.

The Sanya Malhotra starrer suggests a quirky spin to the idea of being eccentric. The word ‘Pagglait’ is relatable and yet unusual. It is coloquelly used by the youth in several parts of India. The word is used to describe someone with a penchant to do crazy things. In the film, Sanya’s character Sandhya is recently-widowed. As events unfold, Sandhya sets on an unconventional path of self-discovery, attempting to find her identity and purpose in life, all this while living amidst the quirky members of her joint family. The film is scheduled to release digitally on March 26.

It is an Akshay Kumar film that is one of the biggest reasons people would want to watch it. However, if we talk about the title it has made many on social media wonder why it is called Bell Bottom? Is it because of the vintage backdrop when bell bottom pants were a rage? The peculiar title renders an element of mystery to the film, only augmented by the fact that it is a spy thriller. The film is slated for a May 28 release.

The title is undoubtedly a very heavy-duty name, just like Sanjay Leela Bhansali’s films normally have. The title is interesting also because it does not reveal anything. It is just a name leaving the viewers to guess what the title role protagonist (Alia Bhatt) is all about. Bhansali directs Alia for the first time. The film is about the life of Gangubai Kothewali, madam of a brothel in Kamathipura, and is based on a chapter of Hussain Zaidi’s book Mafia Queens Of Mumbai. It is set to release on July 30.

This is not the first time a film by Dibaker Bannerjee has an interesting title, but the reasons why this particular title seems special are different. First, its release date has been pushed several times — almost as if Sandeep and Pinky, the protagonists, prefer to stay ‘faraar’ (absconding) from the audience! The real quirk about the title, though, will be evident once people watch it. In the film, Sandeep Kaur is a girl, played by Parineeti Chopra, and Pinky Dahiya is a man, played by Arjun Kapoor.

Actress Seema Pahwa’s debut directorial released in January. Try saying it fast and it can be quite a tongue twister! The film revolves around the Bhargava family that comes together for 13 days to perform the ‘tehrvi’ ritual after the head of the family passes away. The comedy stars Naseeruddin Shah, Supriya Pathak, Konkona Sen Sharma, Parambrata Chatterjee, Vinay Pathak, Vikrant Massey and Manoj Pahwa.