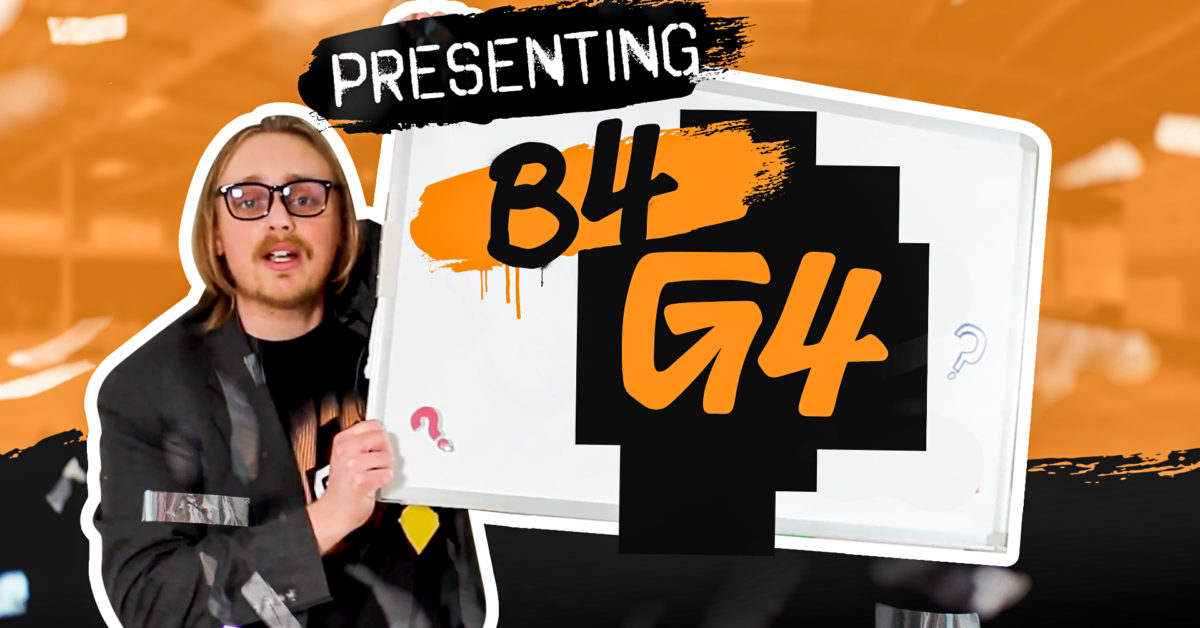 Couple of things you need to know before we go any further. Yes, G4 is back. For real. Like really real. So real in fact that they even announced on Thursday that beloved G4 shows X-Play and Attack of the Show! would be returning when G4 relaunches in Summer 2021. But you’re probably thinking, “Yeah, but Ray? If you don’t mind me calling you that since I know we never met… it’s cool? Thanks. Anyway, it’s a long road between now and Summer 2021? What are we supposed to do until then?” How about helping them with the relaunch? And that’s where new interim G4 CEO Jerry_XL comes in because starting today- before G4 becomes G4- viewers can be a part of B4G4.

Yup, you read that right. B4G4 is a weekly content series that will air on G4’s YouTube and Twitch channels leading up to the official launch date. Fans can offer their thoughts on the content via G4’s Reddit community, allowing them to have a direct say in the formation of the new network. Viewers can expect a wide variety of content, including original sketch comedy, game reviews, talent collaborations, music parodies, a G4 take on esports, and more. But wait! There’s more! G4’s #G4NeedsTalent campaign will continue scouting out new talent for the relaunch, giving those in consideration opportunities to both host on-air as well produce off-air and be a part of a writing team.

In an interview in November 2020 with Variety, WWE wrestler, UpUpDownDown host, hardcore gamer, and new member of the G4 family Xavier Woods (aka Austin Creed) and G4’s Head of Content Kevin Sabbe discussed what G4 will look like in 2020, and more:

So will G4 be on cable, Twitch, YouTube, streaming, or another platform? Yes. Promising that the new G4 isn’t “just gonna be a cable channel tucked away” and that it was going to be “pretty ubiquitous,” Sabbe says the brand will be pretty tough to miss. “We’re gonna be everywhere on every platform. So it’s a digital network, it’s a linear network. We’re kind of gonna be all over the place, and it will look different, but very much the same as what G4 was.”

For Woods, the new G4 is all about bringing together communities bonded by gaming. “It’s a space where you can go and see that yes, games are important, they are fantastic, but this is the gaming culture, not just video games as the game itself, but as a culture, as a community. That’s why I think that G4 is gonna be incredible, and that’s the space that I feel G4 is gonna fill, is to make you feel that sense of community.”

While G4 will still maintain the original network’s twisted, light-hearted approach, Woods says the faces in front of the camera will reflect our times. “Representation matters, representation is important, and especially representation in the games space, because I would say for the past decade, things have been changing. And it’s such a great thing to know that video games especially, they are something that is for everyone. It is a safe space for everyone from all religions, all races, all creeds. Whatever you are, games are for you. And I think that G4 is going to do a fantastic job of making sure that the make-up of the channel represents the make-up of the gaming community.”