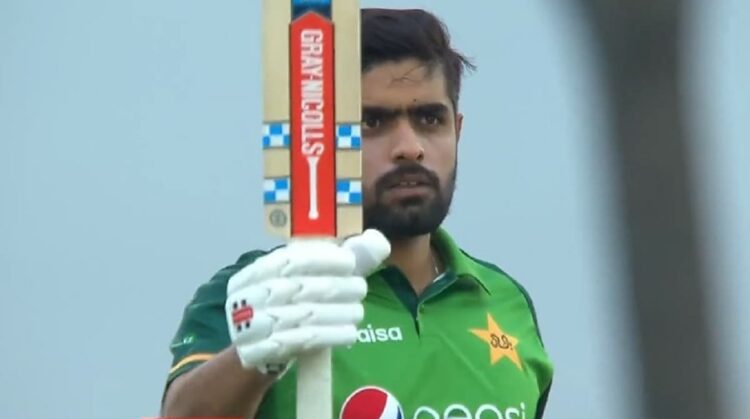 Pakistan captain Babar Azam is breaking record left, right, and center and broke one more in the first ODI against South Africa played at the Supersport Park in Centurion. It is the first of the three-match ODI series, with the next two ODIs to be played on April 4 and 7.

Babar Azam had won the toss and chose to field first, giving his pacers the first go of the new wicket. Shaheen Shah Afridi responded with the wickets of Aiden Markram for 19 and Quinton de Kock for 20, while Mohammad Hasnain got rid of Temba Bavuma for 1 run on his debut as South Africa white-ball captain.

Pakistan’s chase didn’t get off well as Kagiso Rabada clean bowled Fakhar Zaman for 8 runs. But Imam-Ul-Haq (70) added 177 runs for the second wicket with captain Babar Azam. Azam was at his classy best and look utterly comfortable against Rabada and Anrich Nortje’s thunderbolts.

His knock of 103 came in 104 balls with 17 fours to his name. He was dismissed by Nortje, caught behind by Quinton de Kock. However, during his knock, which was also his 13th ODI century, Azam broke the world record of being the fastest to the 13 ODI centuries milestone.

It took the Pakistan captain only 76 innings to score 13 tons in the 50-over format. Azam is currently placed at number 2 in the ICC ODI batsman rankings, while India captain Virat Kohli occupies the number one spot.

Meanwhile, Anrich Nortje picked 4/51, while Phehlukwayo got two wickets, as the chase went right down to the last ball. Mohammad Rizwan’s 40 and Shadab Khan’s 33 got Pakistan close to the target, while wickets fell at regular intervals after the dismissals of Azam and Imam.

Faheem Ashraf made 5* and took Pakistan home on the last ball of the match, earning the Men in Green a 3-wicket win in the first ODI and a lead of 1-0 in the three-match series.

Also Read: Gautam Gambhir Was The Glue That Kept India’s Great Batting Line-Up Of That Era Together – Paddy Upton