Home EntertainmentGossips Bangtan Bomb: BTS surprises Jin with cake for 28th birthday; Jimin, V and RM fuss over how cute their hyung is

Bangtan Bomb: BTS surprises Jin with cake for 28th birthday; Jimin, V and RM fuss over how cute their hyung is 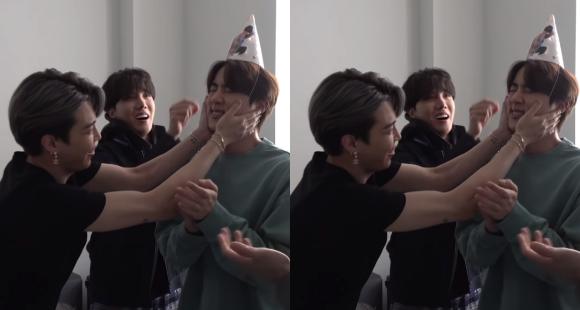 In the latest Bangtan Bomb, we see the BTS members sans Suga surprising Jin on his 28th birthday while the eldest member recounts how V made him feel special by getting his friends like Park Seo-joon to send him birthday wishes.

“You guys are all I”ve got,” Jin states in the latest Bangtan Bomb hitting BTS ARMY straight in the feels! As the eldest member of BTS celebrated his 28th birthday on December 4, which was also shoot day for the members, Jin’s bandmates made sure to make their hyung feel extra special by surprising him with cake, which is an endearing tradition being followed by BTS for years.

We first see Jungkook and J-Hope getting the cake ready, which is customised with the cutest picture of Jin, clicked by V (the shy, chic rabbit pose) during Run BTS Ep 118 along with a 29 and heart candles. When Kookie lights the candles with a matchstick, he almost burns his fingers and his exaggerated expression had Hobi almost bust a lung. The duo then proceeds to take the cake to the room where Jin is, followed by V. All the members; sans Suga who was recovering from shoulder surgery at the time, started singing Happy Birthday to their hyung, who was seated next to RM and stood up happily.

Jin’s endeared expression of happiness melted all his bandmates’ hearts as they proceeded to fuss over him, calling him pretty and cute, with Jimin, V and RM even pulling his cheeks. With J-Hope putting the birthday hat on Jin, the birthday boy made a wish and blew out the candles but not before quipping the lyrics of Life Goes On along with the members. While Jimin kept getting hiccups, Namjoon noted how cute Jin’s photo was as the eldest member recalled V’s Run BTS mission.

“Jin! We’re all you’ve got right,” Jimin asked to which Jin gratefully agreed. ChimChim revealed how Jin has whined the whole day yesterday because no one had contacted him to which Jin disclosed, “I waited until 1 am last night, but only my mom, J-Hope and two people from the company contacted, 5 in total.” When Jimin argued that he had also sent him something, Jin said it was after 1 am while ChimChim stated it was 12:40 am. Taehyung butted in saying he wished him as soon as he came for the shoot. We also couldn’t stop laughing, along with Hobi, over how ChimChim getting hiccups.

For the ones who watched Jin’s birthday V Live already know the story of how TaeTae had his friends, including Park Seo-joon, sent birthday messages to Jin to make him feel special as he felt sad about not too many people calling him at 12. Recounting the same to the members, Jin revealed, “I woke up this morning and about 10 people texted me. Six of Taehyung’s friends sent me a message saying, ‘Happy Birthday’. So I have 16 in total,” as J-Hope added, “So sweet.” While Jin shook hands with V and gave him a thumbs up for his thoughtful gesture, Baby Mochi’s Slytherin mode came blazing through as he snapped the thread off Jin’s birthday hat while the latter’s exaggerated expressions stole the spotlight with Jimin quipping with a laugh, “I barely pulled it!” The video ended in a heartwarming note as Jimin kissed Jin’s fingers.

ALSO READ: BTS: Jin receives a birthday video from Park Seo Joon and calls V to thank him; Complains about Suga to RM

We adore these boys and their lifelong friendship!