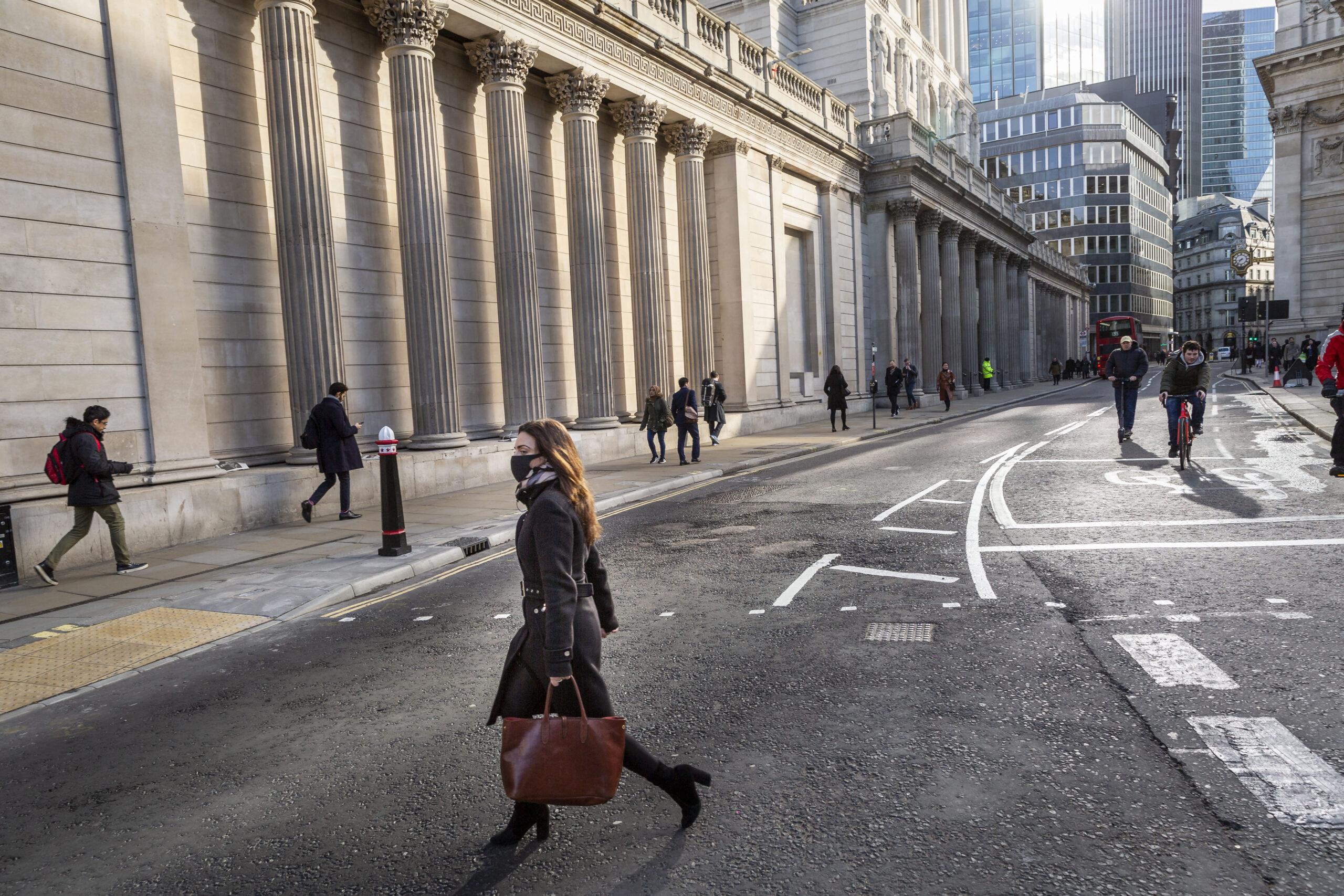 A woman wearing a protective face mask crosses the road in front of the Bank of England in what would normally be the morning rush hour in the City of London on March 17th, 2020. The financial district of the UK is unusually quiet after the government requested people to refrain from all but essential travel and activities yesterday.

LONDON — The U.K.’s central bank on Thursday kept its monetary policy stance unchanged as much of the country enters the festive period under the highest tier of coronavirus restrictions.

The Bank of England kept its main lending rate at 0.1%, having cut twice from 0.75% since the onset of the pandemic in March, and retained its target stock of asset purchases at £895 billion ($1.2 trillion).

At its last meeting in November, the Monetary Policy Committee (MPC) voted to expand its bond buying as England entered a month-long national lockdown amid a resurgence in Covid-19 cases.

In Thursday’s report, the MPC noted that the successful trialing and initial rollout of vaccines was likely to reduce the downside risk to the economic outlook identified in November.

“Nevertheless, recent global activity has been affected by the increase in Covid cases and associated re-imposition of restrictions,” the report said.

“U.K.-weighted global GDP growth in 2020 Q4 is likely to be a little weaker than expected at the time of the November Report.”

Data published last week showed the U.K.’s economic recovery almost grinding to a halt in October, prior to the implementation of more stringent measures. The country has one of the highest death tolls in Europe, with 65,618 deaths and more than 1.9 million cases recorded as of Thursday morning, according to data compiled by Johns Hopkins University.

It has also suffered the greatest economic hit, with GDP (gross domestic product) plunging and unprecedented 19.8% in the second quarter.

The Bank noted that recent activity has been stronger than expected, despite the surge in cases and associated lockdown measures. However, it noted that the restrictions introduced following the lifting of lockdowns have been more stringent than anticipated, and are expected to weigh on activity in the first quarter of 2021.

“The outlook for the economy remains unusually uncertain. It depends on the evolution of the pandemic and measures taken to protect public health, as well as the nature of, and transition to, the new trading arrangements between the European Union and the United Kingdom,” the MPC said in the report, adding that it will monitor the situation closely and stands ready to act if the outlook for inflation weakens.

U.K. 12-month CPI (consumer price index) inflation fell to 0.3% in November from 0.7% in October, remaining well below the Bank’s 2% target.

“Just as the Federal Reserve awaits news of a stimulus package, the Bank of England is stuck waiting for the Brexit negotiations to be resolved and as such have chosen to keep further stimulus on hold,” said Hinesh Patel, portfolio manager at Quilter Investors, in a research note.

“It appears the BoE are paralyzed to the outcome of a Brexit deal but still are still conscious as they seek to adapt where they can.”

Patel added that with much of the country in the highest tier of Covid restrictions, the Bank will be in “wait and see mode” before responding to any further economic threats, and will remain as accommodative as it has been throughout the year.

AJ Bell Financial Analyst Laith Khalaf agreed that the Bank will not make its next move until it knows which way Brexit is heading.

“In the event of no-deal, it would likely be willing to look through the temporary jump in inflation as a result of weaker sterling and the imposition of tariffs, but it couldn’t turn a blind eye to the economic impact of a disorderly Brexit,” he said.

“The Bank’s governor has said no deal would have a greater long-term economic effect than the pandemic, so we can expect further stimulus should Brexit talks fail, either in the form of more QE (quantitative easing), or interest rate cuts.”