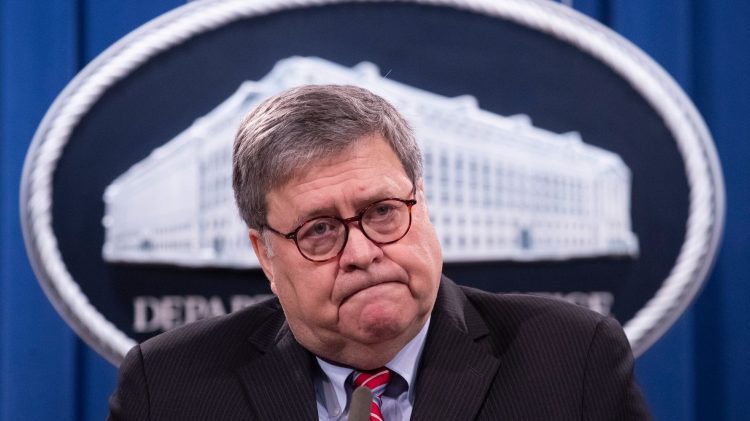 Speaking at a press conference from the Justice Department, Barr said he saw “no basis” for seizing voting machines ― a move suggested by Trump campaign attorney Rudy Giuliani during a White House meeting on Friday, according to The New York Times.

Nearly seven weeks after Election Day, Trump still refuses to concede the election to President-elect Joe Biden. The Electoral College voted last week to confirm the Democrat’s victory. But Trump and his allies continue to argue baseless fraud claims and have falsely accused Democrats of “rigging” the election.

Trump announced on Dec. 14 that Barr had submitted his resignation, effective Dec. 23. The attorney general, who often faced backlash from Democrats and legal experts for rubber-stamping Trump’s political agenda, reportedly fell out of favor with the president after acknowledging that the Justice Department had found no evidence of widespread election fraud.

Bill Barr says he will not name a special counsel to investigate Trump’s (unfounded) claims of election fraud: “If I thought a special counsel at this stage was the right tool, I would name one, but I haven’t and I’m not going to.” pic.twitter.com/QUAEpKX5D8

During the Friday meeting at the White House, the Trump team weighed several Hail Mary ideas for overturning the election results, according to the Times.

Most alarmingly, Trump reportedly asked about imposing martial law and deploying the military to “rerun” the election ― a strategy floated by former national security adviser Michael Flynn, whom the president recently pardoned. (In a Sunday tweet, Trump appeared to deny that such a discussion took place.)

The president also discussed the idea of appointing attorney Sidney Powell as a special counsel to investigate election fraud. Powell has promoted unsubstantiated conspiracy theories about Biden’s win, including claiming that Georgia Gov. Brian Kemp, a Republican, helped rig the election against Trump.

Barr reiterated on Monday that his department has not found any evidence to support the allegations of widespread fraud.

There is fraud “I think in most elections,” Barr said. “I think we’re too tolerant of it. And I’m sure there was fraud in this election. But I was commenting on the extent to which we had looked at suggestions or allegations of systemic or broad-based fraud that would affect the outcome of the election, and I already spoke to that and I stand by that statement.”

Asked if he felt there was a need for a special counsel to investigate alleged election fraud, Barr said no.

“If I thought a special counsel at this stage was the right tool and it was appropriate, I would name one,” he said. “But I haven’t and I’m not going to.”

Attorney General William Barr says he has “not seen a reason to appoint a special counsel” to investigate Hunter Biden, and has “no plan to do so” before he steps down https://t.co/Nj065CIsxp pic.twitter.com/My7WnkdTTq

Trump and some top Republicans, including Sen. Lindsey Graham of South Carolina, have also called for a special counsel to investigate Biden’s son Hunter and his dealings with China. The Biden transition team announced earlier this month that the Justice Department was investigating Hunter Biden over tax issues.

But Barr said Monday that he has no plan to appoint a special counsel to look at Hunter Biden’s actions either.

“I think to the extent that there’s an investigation, I think that it’s being handled responsibly and professionally currently within the department,” he said. “And to this point, I have not seen a reason to appoint a special counsel and I have no plan to do so before I leave.”

In addition, the attorney general contradicted Trump’s assessment of the recently disclosed, massive cyberattack against U.S. agencies and companies, saying that it “certainly appears” as though the Russians were behind it.

Though the U.S. intelligence community and Secretary of State Mike Pompeo have determined that the Russians carried out the operation, Trump tweeted Saturday without evidence that China ― not Russia ― may have been behind it.

Sen. Mitt Romney (R-Utah) last Thursday scolded the White House for its silence on the matter and bashed Trump on Sunday for having a “blind spot” when it comes to Russia.