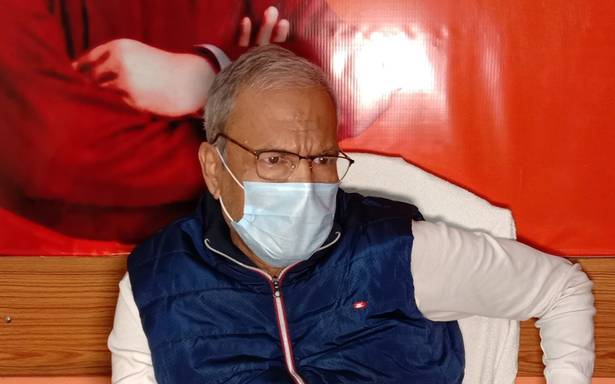 Silbhadra Datta has been vocal against the party for quite some time and had also announced his decision not to contest the Assembly poll on Trinamool Congress ticket.

Barrackpore MLA Silbhadra Datta on Friday resigned from Trinamool Congress. He sent his resignation to Chief Minister Mamata Banerjee during the day. Mr. Datta has been vocal against the party for quite some time and had also announced his decision not to contest the Assembly poll on Trinamool Congress ticket. Mr. Datta told journalists on Friday that he had resigned from the party but would remain an MLA.

On Thursday evening, Shyamapada Mukherjee, former Minister in West Bengal government and Trinamool Congress leader, announced his decision to quit the party. Along with these leaders, TMC MP from Bardhaman Purba Sunil Kumar Mondal and leader Diptangshu Chowdhury have also struck a discordant note and are likely to join the BJP.

Along with these prominent leaders of the Trinamool Congress, a number of party block leaders have resigned expressing their support to Mr. Adhikari. His posters came up on Friday morning in several places in Kolkata and other parts of the State.

All eyes on Amit Shah’s rally

At a time when all eyes are on Union Home Minister Amit Shah’s rally at Midnapore on Saturday, discontent has come to the fore in the Bharatiya Janata Party (BJP).

Party’s Asansol MP Babul Supriyo came out publicly against the possibility of inclusion of Mr. Tewari saying that he was behind the attack of many BJP workers in Asansol. State BJP president Dilip Ghosh appeared to be in agreement with Mr. Supriyo and added that Mr. Tewari had come in the way of development of Asansol. Similarly protests erupted in Bankura BJP leadership over the possibility of inclusion of Mr. Mukherjee in the party.