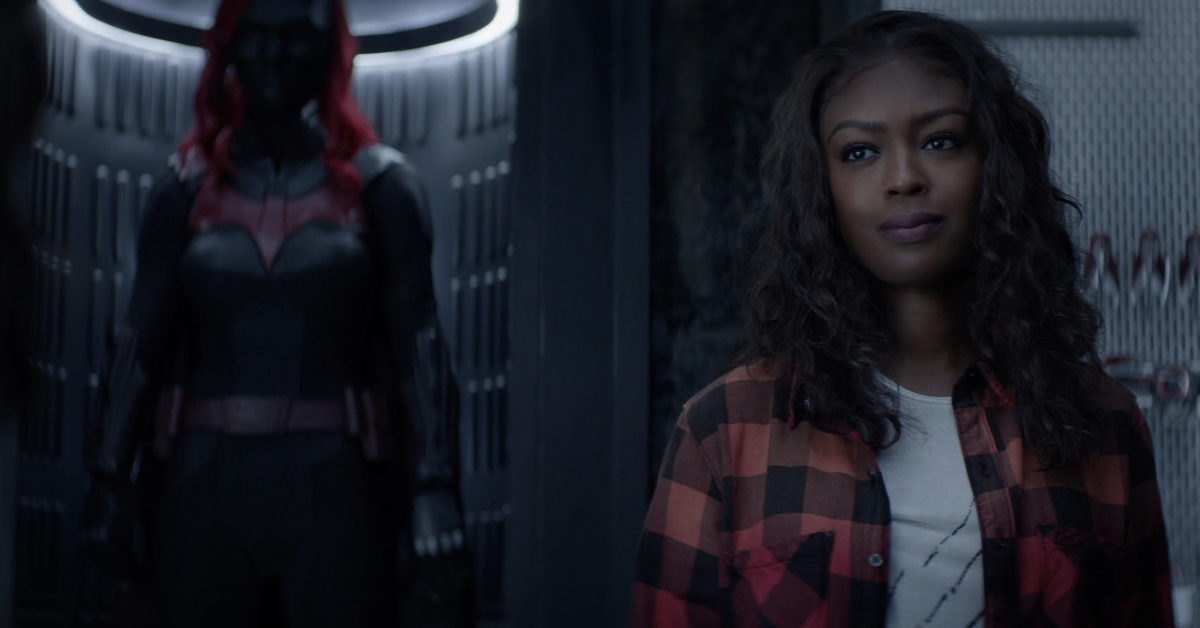 Team Batwoman has to decide to keep going, letting Ryan Wilder wear the suit, as she grapples with Batwoman’s basic conundrum: does wearing the cowl mean no killing? Is revenge justice? Meanwhile, Alice begins to spring a trap for Gotham.

After introducing Ryan Wilder (Javicia Leslie) in episode 1, Team Batwoman has to make a major choice. Do we keep up with this happy accident, this twist of fate that landed the batsuit in Ryan’s lap? Or do they all just start going on with their lives hoping that somehow Kate Kane will come swooping back in to save them? This episode helps move the plot forward while also justifying why this team should continue to work together. And in that sense, it overall succeeds but it could use a little more of the punch and panache of previous episodes.

This episode was going to have to happen sooner or later– giving the characters the internal logic of why Team Batwoman would let this unknown stranger keep wearing the suit. And so it delivers on this exposition-heavy premise with some important character beats. Perhaps one of the most interesting of these is we find out that Ryan and Sophie (Meagan Tandy) have a previous history because of Ms. Wilder’s previous run-ins with the law. There are some not so subtle jabs at the state of the criminal justice system and lack of support for individuals who find themselves experiencing homelessness, which are takes I’m here for all day. I wish they felt more cohesive and thematic rather than just social justice punch up commentary, but hopefully, we get those episodes soon.

We do, however, get a return of the Batmobile which, as predicted, is likely to become a mainstay of the new season. I’m definitely not arguing, as the scene where Batwoman leads a throng of infected bats away from a crowd leads to one of the best points in the episode. The central question of the episode: does Gotham need Batwoman, and is Ryan Wilder the right person to fill that role? After saving a young homeless girl from an explosion, Wilder says she’s not Batwoman. “You are to me,” the young Black girl replies. Powerful stuff and that moment alone makes this episode worthwhile.

The show’s aesthetics seem a little disjointed and mismatched in this episode, however. A pale-lit scene of Alice (Rachel Skarsten) and Julia Pennyworth (Christina Wolfe) is pure gold. The shot choices and angles give Skarten a giant canvas to really bring some grade-A prime ham to her performance — exactly as a Batman villain should! — and it’s a great villain scene.

And yet a rooftop fight between Alice and Batwoman feels off, with some weird choices for the show’s score. We can simply do better than this, but, thankfully, this is the only scene where it’s a major issue. But the episode also doesn’t do itself any favors in its introduction of new villain Safiyah. We can be patient and let this unfold over a few more episodes, but this needs to be more clear very quickly exactly what both Alice’s and Safiyah’s plans for Gotham are.

We also get an episode-long rumination on Batman/Batwoman’s central ethos: no killing. While it’s an oath we know in-universe both Bruce Wayne and Kate Kane violated, it resets the standard for Ryan Wilder while also asking if it’s really necessary. Both Ryan and Mary have real reasons to want Alice dead. Is their pursuit justice? Or just revenge? And while these threads are laid out, they’re not developed quite as well as they could be. Here’s hoping there’s more of this as the season continues.

“NEW HERO, NEW SUIT – As Ryan Wilder (Javicia Leslie) continues to prove herself as Batwoman, she encounters the challenge of every superhero – living a double life. Mary (Nicole Kang) is still Team Ryan, while Luke (Camrus Johnson) continues to have reservations – especially when Ryan makes some alterations and unveils a new Batsuit! Meanwhile, Victor Szasz (guest star Alex Morf) is slashing his way through the city streets, and Commander Kane (Dougray Scott) has The Crows trying to stop the flow of Snakebite through Gotham. Safiyah (guest star Shivaani Ghai) takes notice of Alice’s (Rachel Skarsten) antics and Sophie (Meagan Tandy) finds herself in unexpected circumstances.