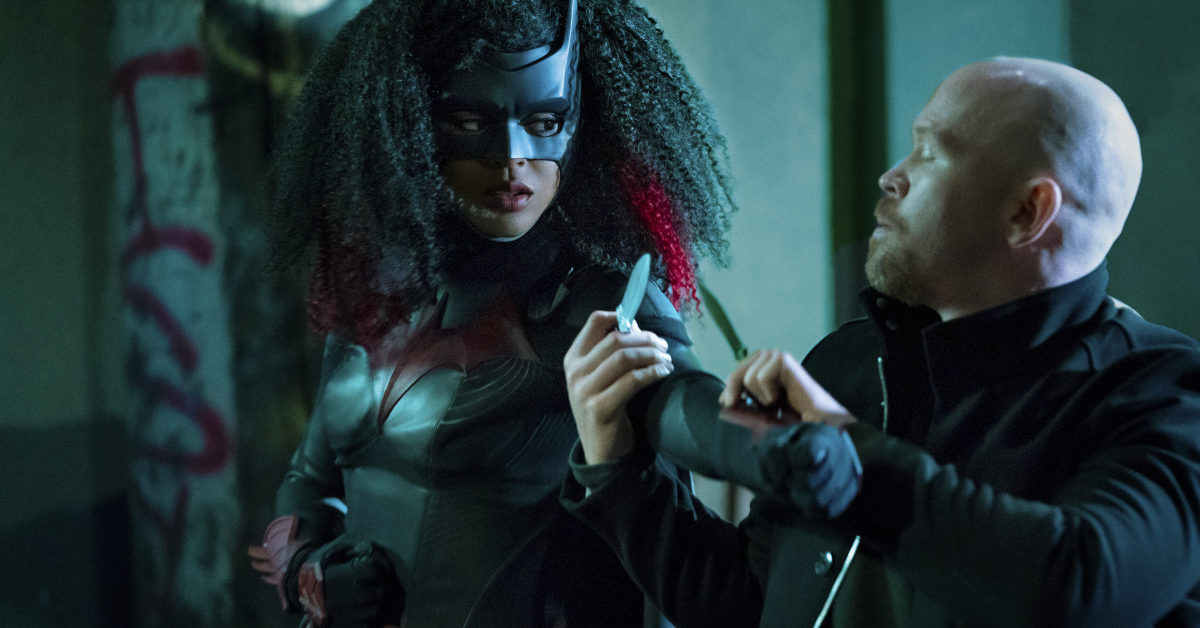 Heading into this weekend’s episode of The CW’s Batwoman, Ryan Wilder (Javicia Leslie) is officially wearing the cowl (for now)- even with Luke (Camrus Johnson) having his doubts. What’s definitely not going to calm his nerves? Ryan “personalizing” the suit to her fighting style- not exactly the kind of “moving on from Kate” move he was prepared for. Meanwhile, Mary’s (Nicole Kang) all-in on Wilder’s run as Gotham’s newest defender, but the following preview images show that she has other matters taking precedent, like the appearance of  Victor Szasz (Alex Morf)- and where he goes, a body count is sure to follow. Still not enough? Jacob’s still dealing with the loss of his daughter while also trying to get a handle on the flow of Snakebite throughout the city. Of course, that could just be the calm before the storm as Safiyah (Shivaani Ghai) looks to offer Alice (Rachel Skarsten) “thanks” for the “gift” Alice gave her in return- with Sophie (Meagan Tandy) caught in the middle. So that’s where things stand heading into Sunday night’s “Bat Girl Magic!”- and here’s a look at some preview images, an episode overview, and a promo for what viewers can expect.

In season two of Batwoman, when Ryan Wilder (Javicia Leslie) first discovers Kate Kane’s Batsuit, she has no idea how drastically her life is about to change. A sassy, smart lesbian with a difficult past, Ryan sees the suit as her chance to finally be powerful and no longer a victim as she survives in the tough streets of the city.

While Ryan goes rogue in the shadows, Gotham grapples with their missing hero, believing Batwoman has fled the city after a public stand-off with Commander Jacob Kane (Dougray Scott) and the Crows. But Kate Kane’s disappearance hits hardest at home where Jacob, Sophie (Meagan Tandy), Luke (Camrus Johnson), Mary (Nicole Kang), and even Alice (Rachel Skarsten) each struggle with the devastating news in their own way. Meanwhile, the False Face Society tightens its grip on Gotham, distributing a perilous new drug known as Snakebite, “Bruce Wayne” (Warren Christie) finds his way home to wreak havoc, Safiyah (Shivaani Ghai) surfaces with plans for revenge, and a new set of villains descends on the city.

It’s not long before Ryan realizes how much the symbol on the suit means to Gotham, launching her on a personal journey that takes her from fledgling substitute to confident caped crusader, from living in her van with her plant to chasing villains in the Batmobile. Ryan Wilder becomes a very different Batwoman than Kate Kane – her own Batwoman – but with the same understanding of what it means to be a hero.