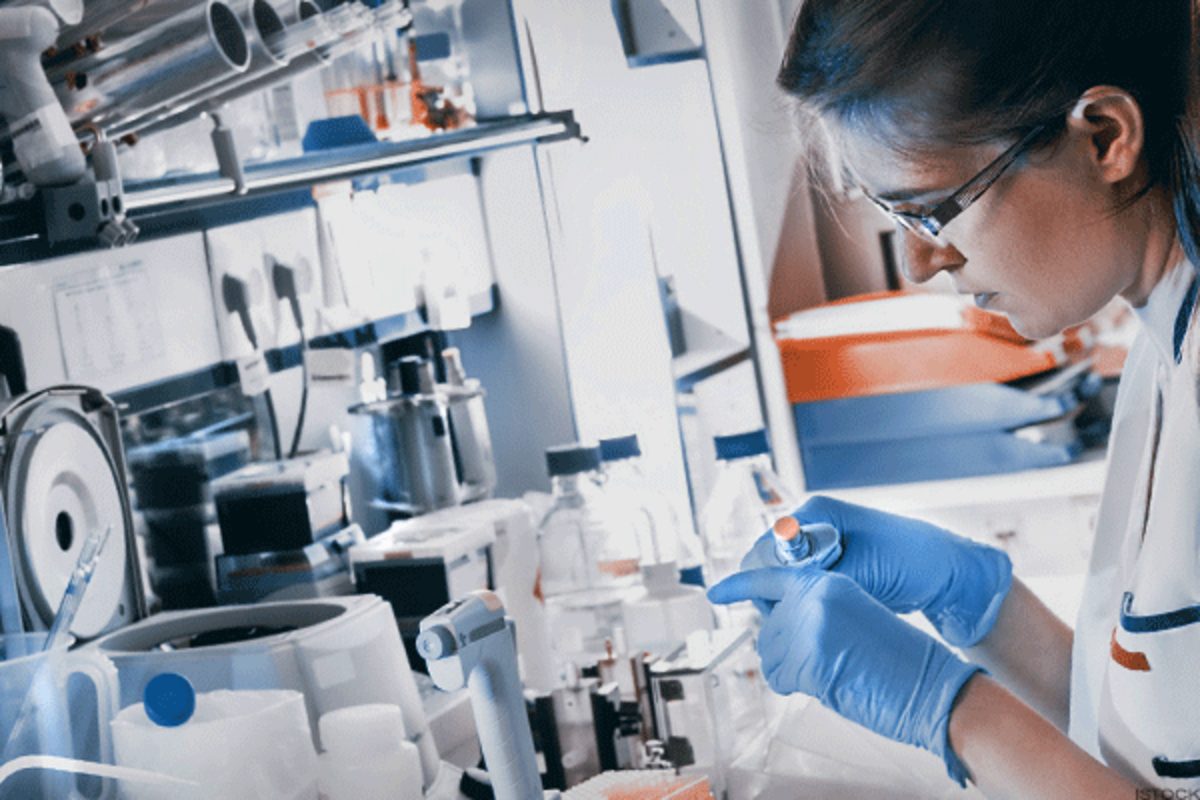 Investing in biotech can be a bit of an experiment: I have profiled several small-cap biotech stocks that have grown into real monsters, and others that have gone dormant.

This is basically the roller coaster an investor can expect from this high-beta segment of the market. Few areas in equities are more volatile than small-cap biotech, biopharma and health care. Combined, these sectors produce more massive winners and horrid losers than any other area of the market. So, just as a scientist has to live with trial and error, the investor must be able to live with loser stocks. That’s why diversification is key to staying sane and profitable over the long term.

Still, the biotech sector has been on a real tear in recent months.

I would not be surprised, in fact, if the sector saw some profit-taking at some point soon. Of course, I could say that about the overall market, which I currently see as overbought.

That said, biotech should be well-positioned in 2021. We should get back to “normalcy” at some point in the new year, and mergers and acquisitions will eventually pick up. We have seen a few large transactions in recent months already, including the $39 billion takeover of Alexion Pharmaceuticals (ALXN) – Get Report by AstraZeneca  (AZN) – Get Report, which was the largest deal in the sector for the year.

What names should do well in 2021? Here are the ones I see getting let out of the cage:

First is Heron Therapeutics  (HRTX) – Get Report, a company I have mentioned a few times on Real Money this year. Sales of its anti-nausea drug Cinvanti should pick up as regular oncology procedures return to their normal pattern after getting hit in many areas of the country from lockdowns and other restrictions. In addition, its pain-relief compound Zynrelef should be approved by the Food and Drug Administration in the first half of 2021. The compound recently was approved in Europe. This should become a much more important product for the company than Cinvanti over time.

Next up is Theravance Biopharma (TBPH) – Get Report. Covid-19 hurt the growth of Yupelri, which was approved in 2018. This product is the only once-daily, nebulized bronchodilator approved in the U.S. for the maintenance treatment of patients with chronic obstructive pulmonary disease or COPD. That drug should get back on track in 2021. In addition, royalty litigation around another product should be resolved in the coming year. The company also has several late-stage studies for other products whose data should hit next year. Add it all up, and you have a lot of potential positive catalysts for this biopharma name in the new year.

Biohaven Pharmaceuticals (BHVN) – Get Report is another name I’m watching. Biohaven has delivered in a big-time way for shareholders in 2020 but seems poised for more upside still in 2021. The company launched Nurtec ODT, which was earlier this year approved for acute migraines. By the third quarter, 220,000 prescriptions were written for the drug. Nurtec ODT looks to be a blockbuster in this part of the market.

Now, the company is already working on another product in this space called Zavegepant, which in its oral form could prevent migraines and non-migraine headaches. Some key trials should post data in the first half of 2021, and, if all goes well, this compound could get FDA approval by a year from now. The company is also targeting three other drug launches, provided all goes well, in trials by 2023. With a market cap just north of $5.5 billion, this mid-cap company could end up on a larger player’s shopping list at some point.

I also like Karyopharm Therapeutics (KPTI) – Get Report, as it is approaching the new year with some momentum. Its Xpovio drug has shown good sales growth in 2020. This compound was originally FDA-approved for the treatment of relapsed or refractory multiple myeloma — a cancer of plasma cells —  and for some types of large B-cell lymphoma. The FDA earlier in December OK’d Xpovio in combination with bortezomib and dexamethasone for patients with multiple myeloma who tried at least one prior therapy. The compound has also shown good recent trial results in other oncology areas and appears set to be approved for other indications in 2021. I see this as another possible buyout target.

On the Shelf, Ready to Go

Finally, we have some holdovers, those names stuck on the lab’s shelf that didn’t do much in 2020, but should be good picks for 2021. BioDelivery Sciences (BDSI) – Get Report has not gotten the credit it deserves for the impressive sales growth it has achieved from pain medicine Belbuca, since it got the marketing rights back for this product from Endo International (ENDP) – Get Report at the end of 2017. In 2021, however, the company should be able to churn out consistent profitability quarters and investors realize it is trading at approximately one-times peak annual revenue from its current product portfolio.

Another name is Exelixis (EXEL) – Get Report, which posted a small gain in 2020, even as growth in its core kidney cancer treatment product Cabometyx took a hit from the pandemic. Cabometyx alone is an approximately $1 billion a year franchise. The compound is in trials for a variety of other uses that could triple to quintuple peak annual sales, according to management. The company also has approximately $1.5 billion in cash on the balance sheet, which the company plans to use to make small “bolt-on” acquisitions, as good opportunities present themselves. That is if this approximately $6 billion market-cap company is not the target of a larger player first in 2021.

Back to Top
Close Add post
X
Bitcoin Next Week: Levels and Patterns to WatchBusinessTipRanks3 Monster Growth Stocks That Could Weather the VolatilityVolatility is back on the menu. Last week brought January’s trading to a close in wha…

Best Biotech Stocks to Buy in 2021