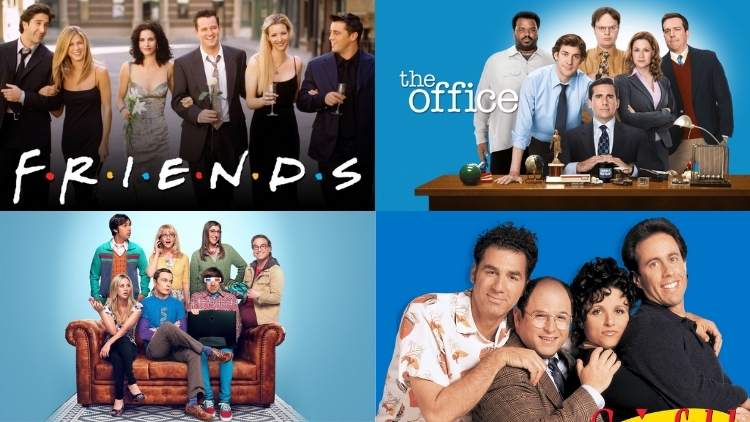 Sitcoms have been one of the most popular genres of entertainment since a very long time. Most of us like watching comedy shows as it helps us relax at the end of the day. Here is a list of top 10 sitcoms which you can watch with your friends & family

Seinfeld was created by popular stand-up comedian Jerry Seinfeld and writer-producer Larry David. Both Seinfeld and David were active in the writing department of the show as well. The show ran from 1989 to 1998 had 9 seasons and at its peak, the show was as popular as the others mentioned above. The show has an IMDB rating of 8.8

Seinfeld is also called a ‘show about nothing’. This is because it focuses on real-life situations and the daily activities of the lead characters. All the characters in the show are very relatable. They remind you of people around you and your interactions with them.

Arguably, the most popular comedy show on the list, Friends aired from 1994 to 2004 and had 10 seasons. This show has an IMDB rating of 8.8. Marta Kauffman and David Crane were the creators of this show.

The show revolved around the lives of six friends in their twenties living in New York City. Over the course of 10 years and seasons, these friends go through life lessons, family, love, drama, friendship, and comedy.

The Office was created by Greg Daniels and Ricky Gervais. It is an adaptation of the British version of the show with the same name. The show aired from 2005 to 2013 and had 9 seasons. It has an IMDB rating of 8.9

The show included an ensemble cast consisting of Steve Carell as Michael Scott, John Krasinski as Jim, Jenna Fischer as Pam and Rainn Wilson as Dwight among others.

The show is a mockumentary on a group of typical office workers, where the workday consists of ego clashes, inappropriate behavior, and tedium

The Big Bang Theory(TBBT) aired from 2007 to 2019 and consisted of 12 seasons. It has an IMDB rating of 8.1. Chuck Lorre and Bill Prady were the creators of this show.

The story revolves around Leonard and Sheldon, both brilliant physicists who are friends with mechanical engineer Howard and astrophysicist Rajesh. When Penny, a pretty woman and an aspiring actress, moves into the apartment across the hall from Leonard and Sheldon’s, Leonard has another aspiration in life, namely to get Penny to be his girlfriend.

Brooklyn Nine-Nine was created by Dan Goor and Michael Schur. The show started airing in 2013 and has an IMDB rating of 8.4.

The show revolves around the exploits of Det. Jake Peralta played by Samberg, and his diverse, lovable colleagues as they police the NYPD’s 99th Precinct.

The Simpsons is an animated sitcom about the antics of a dysfunctional family. The show began in the year 1989 and it is still running. So far, the show has a total of 33 seasons. The show has an IMDB rating of 8.6 and it was created by James L. Brooks, Matt Groening and Sam Simon.

The voiceover artists in the show include Dan Castellaneta, Nancy Cartwright, Harry Shearer, Julie Kavner and Yeardley Smith among others.

The family in the show includes Homer who is the oafish unhealthy beer loving father, Marge is the hardworking homemaker wife, Bart is the perpetual ten-year-old underachiever, Lisa is the unappreciated eight-year-old genius, and Maggie is the cute, pacifier loving silent infant.

7. How I Met Your Mother

Carter Bays and Craig Thomas were the creators of How I Met Your Mother(HIMYM). The show aired from 2005 to 2014 and had 9 seasons. The show has an IMDB rating of 8.3

The show revolves around Ted who sits down with his kids, to tell them the story of how he met their mother. The story is told through memories of his friends Marshall, Lily, Robin, and Barney Stinson. All legendary 9 seasons lead up to the moment of Ted’s final encounter with “the one.”

Larry David was the creator of Curb Your Enthusiasm. He also plays the lead role of himself in the show. The show started airing in 2000 and continues till date. So far the show has had 11 seasons.

The show revolves around the life of Larry David himself and his adventures & troubles with his friends and family. It is an unflinching, self-deprecating depiction of his life

It’s Always Sunny in Philadelphia was created by Glenn Howerton and Rob McElhenney. The show began in the year 2005 and it is still running. So far the show has had 15 seasons. The show has an IMDB Rating of 8.8

The cast of the show includes Charlie Day as Charlie, Glenn Howerton as Dennis, Rob McElhenney as Mac, Kaitlin Olson as Dee and veteran Danny DeVito as Frank.

The story is about a gang of 5 alcoholics who run a failing bar. The gang make up some scheme for money, fame or for any other terrible reason you could think of. It always goes south however, as the gang have their plans blow up in their face.

Mitchell Hurwitz was the creator of Arrested Develppment. The show started airing in 2003 and the last season aired in 2019. In total, the show has 5 seasons. The show has an IMDB rating of 8.7

The cast of Arrested Development includes Jason Bateman, Michael Cera, Portia de Rossi, Will Arnett and Tony Hale among others.

The show is about Michael Bluth who takes over family affairs after his father is imprisoned. But the rest of his spoiled, dysfunctional family are making his job unbearable.