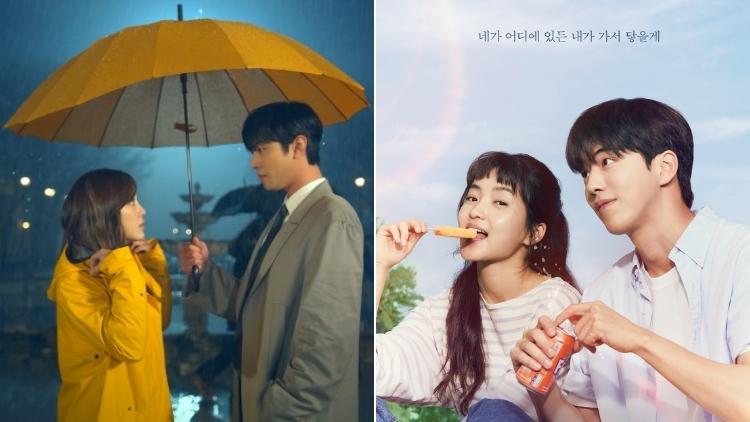 February is the month of love and happiness and you will see a bunch of romantic K-Dramas upcoming this month. From ‘Forecasting Love and Weather’ to ‘Twenty-Five Twenty One’. I have curated a list of the Best Korean Dramas that will start airing in February 2022.

This is a drama based on the lifestyles of National Weather Forecasting Service meteorologists. Park Min Young portrays chief weather forecaster, Jin Ha Kyung, a serene and controlled young lady who adheres to the principles and holds her professional and personal life apart. Sang Kang depicts Lee Shi Woo, a free-spirited reporter who is always thinking outside the box. Despite his remarkable IQ of 150, he is just concerned with the weather.

The adventure opens in 1998. After their aspirations are destroyed, young individuals find a new direction and a fresh opportunity for growth in the series. Na Hee Do and Baek Yi Jin, portrayed by Kim Tae Ri and Nam Joo Hyuk, meet face to face while she is 18 and he is 22. They form a relationship with one another three years later.

The drama involves three buddies who met in their sophomore year of high school and are now approaching their forties. The drama will highlight the beautiful and dramatic everyday experiences of three 39-year-old women who find themselves in unforeseen circumstances. Cha Mi Jo, the head dermatologist at a Gangnam clinic, is portrayed by Son Ye Jin. Jeon Mi Do depicts Jung Chan Young, an acting teacher who dreamed to be an actress in her youth. Jang Joo Hee, a department store cosmetic products manager, is featured by Kim Ji Hyun.

This is a detective thriller about a bunch of people who are all trying to find a man known as “The Ghost” for distinct causes. To safeguard humanity from the life-threatening solar wind, the Ghost designed a shield. After that, he vanished, only to remerge 24 years later as a killer’s accomplice. Seo Kang Joon is accompanied by Kim Sae Ha, a bloodhound from the Department of Management who hunts the phantom with zeal.

Jung Sae Byuk, played by Kim Ah Joon, is an inveterate hunter who is also on the lookout for the Phantom. Song Oh Jin, portrayed by Kim Moon Yeol, is another worker of the Department of Management who originally denies the Phantom’s existence until becoming entangled in the mystery. Kim Sun Gyung portrays the assassin Kim Ma Nok, who is under the protection of Phantom

This comedy-drama is inspired by the same-named Japanese manga. Nam Geun Pil (Park Hae Joon), a middle-aged man, resolves to rebel against a society that emphasizes the obligation of men, who are primarily the family’s breadwinners and discover his own identity.

He quits his job and suffers criticism from his girlfriend’s and daughter’s father since he has no plans. He begins to drink, but one day he realizes that the man he misidentified for his next-door neighbor is actually a very prosperous webtoon creator, and he proceeds to learn this vocation.

This is a romantic comedy based on a webtoon about an office worker who goes on a blind date in the disguise of a friend. The individual she is meant to see turns out to be the company’s CEO. On a blind date, Shin Ha Ri, an ordinary office worker, transforms into a captivating femme fatale, played by Kim Se Jeong. Kang Tae Moo, played by Ahn Hyo Seop, is a brilliant, gorgeous third-generation chaebol. He is normally icy and surly, although he does have a softer side to him.

This is a storyline about four persons who are looking for someone to sponsor them in order to fulfill their desires. Lee Sun Woo is an Asian actor. She has a suffering son (Lee Ji Hoon), who works as a photographer and editor for a well-known magazine and seeks vengeance for his traumatic past. Han Chae Rin (Han Chae Young) is the CEO of a cosmetics company that possesses both prosperity and beauty.

She is a driven woman who is able to obtain whatever she desires. Park Do Soom (Ji Yi Soo) is a rising star in the South Korean entertainment industry. She’s driven and willing to go to great lengths to achieve her goals. She looks after her son, who has a rare illness, and she attempts to keep him safe. Hyun Seung Hoon (Goo Ja Sung) is married to Park Do Som, who aspires to be a model but is disappointed by reality.

This is a political thriller in the dangerous world of sofa shopping. The plot revolves around a group of ladies who are leading the businesses on the couch while desperately trying to make ends meet in this competitive industry.

In the drama, Ahn Bo Hyun and Jo Bo Ah play two military prosecutors who came to the position for opposite reasons but wind up working together to fight evil in the army. Do Bae Man, played by Ahn Bo Hyun, is a jaded prosecutor who is unconcerned with his job and longs for the day when he may shed his military uniform. Cha Woo In, played by Jo Bo Ah, on the other hand, is the sole daughter of a chaebol family who decides to become a military prosecutor as a form of vengeance.

Which K-Dramas will you be watching in February 2022? Let us know in the comments below!