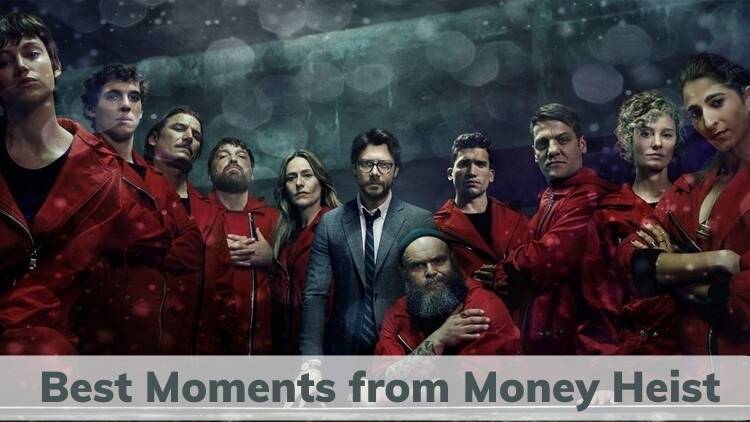 This scene was so epic seeing her get past the police and get inside the Royal Mint on their motorcycle in style..! But right after that Moscow gets shot by the police, helping Tokyo get in safely, that was very sad.

Not gonna lie, after everything they went through, I honestly wanted Berlin to escape with the others. However, seeing him in the latest seasons really felt nice even if they were just flashbacks and back-stories. Somewhere I hoped until the last moment that Berlin would find a way to escape and live even if he gets caught.

When Lisbon’s execution was faked by the police and made Professor think she was dead. I was so shocked to see Lisbon die so soon…but then they revealed that the police had faked everything and it was such a relief. I felt so bad for the Professor and thought maybe because of this he’ll be broken and he plan may fall apart but he picked himself up and with the help of Marseille and other team members the plan went on.

Gandia killed our beloved Nairobi?! Right when she was getting better and we thought she was finally safe after almost dying in the fourth season, he kills her!! My trust issues reached another level after this scene.

When the very pregnant Alicia Sierra found out the Professors hideout all by herself was breathtaking… After this, I was just waiting for the next season with all the questions in my head – What will happen with the plan now?-who will guide them to execute the plan? What will she do with the Professor-arrest him? Kill him? Tell me!

I definitely did not see this coming! Tokyo being the narrator of the series from the beginning I never thought she’ll die till the end. This came as such a shock. After all the efforts Denver took trying to get her to safety and Rio trying to get to her on time it was so thrilling! But Tokyo fought till her last breath and avenged our beloved Nairobi before taking the fall. She sacrificed herself and killed 6 soldiers including Gandía.

8. Professor and Alicia Escape from the Police

Just when I thought how they would escape now…Professor uses his brilliant mind yet again. Even with a newborn baby with them, Alicia and the Professor manage to escape from the grasps of the police and slid from their sight.

9. When Alicia Sierra helped The Professor

Just when I thought nothing could go wrong from here now…there comes Rafael and Tatiana swooping in and taking away all the loot after everyone else’s hard work and planning. And up to this point, Alicia Sierra had gained a collective hatred throughout the series, especially when she tortured Rio and got Nairobi shot. But after that her character development was great and we can agree we started liking her by the end. The way she used her brains to find out where the gold would’ve been taken after being stolen from them was impressive. Also, the way she got the gold back was pretty amazing.

10. Finally, when they all got away with the second heist

I don’t know about you, but once the police broke into the Bank of Spain and arrested them, I thought that was it. Then comes Professor and saves the day again and they get away safely with the second heist and everyone had a happy ending, even Denver who was in the custody of the police.