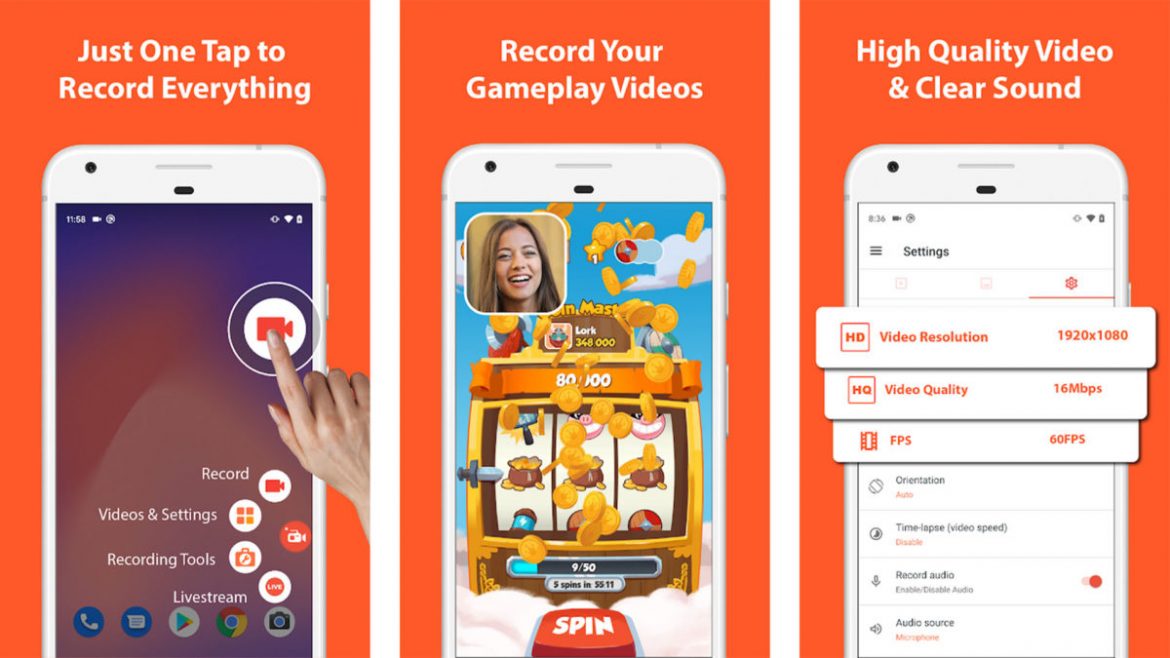 You must have seen videos such as gameplays, educational content, or how-to videos. But do you ever wonder how do those people do it?

It might seem difficult but is actually very easy – by using screen recording apps. Screen recordings are pretty common these days as people use them to record all sorts of stuff and share it with their audience.

And if you would like to do the same, the process is super easy. I mean you probably already have everything including a decent android phone and a fast internet connection such as CenturyLink Internet. The only thing you are missing is a good screen recording app.

So in this guide, we will help tell you about the 10 best screen recording apps for android that can offer you everything you need.

Screen Recorder is the best app for android users that comes with a lot of useful features such as Facecam while recording videos.

However, something that makes this app a top choice for users is that it doesn’t show any ads at all. There are not even any in-app purchases that will ask you for money to unlock any specific features.

Moreover, users are free to add any logos and text in the video along with the freedom to record in various resolutions or frame rate options.

Screen Recorder doesn’t require root access and allows users to record video without any watermarks, trim it, and even record external audio and touch inputs. In short, it is everything you can wish for.

AZ Screen Recorder is another amazing app that is used by a majority of people out there. The app offers outstanding customization options allowing users to select everything including the video quality, bit rate, frame rate, and whatnot.

Moreover, there are options to record screen time-lapse, internal & external audio, touch, and much more. The downside is that this app shows ads and you also have to spend money to unlock features such as compressing and video editing.

If the complex user interface troubles you and you need something simple yet powerful, the Super Screen recorder is the one to go for.

This app is pretty easy to understand as the menus and settings are straightforward. Moreover, there is no cost attached to it.

Users can record videos and audio, along with choosing the video quality, frame rate, etc. On top of that, you can mark areas in the recording and add comments during the video.

Another ad and in-app purchases free option for recording gameplays and apps is the Google Play Games. Yeah, you read it right. Google Play Games not just offers cool games to play but also allows users to record them. The video quality is limited to 720p with no time limits.

However, it usually works with newer devices and is not available in all countries.

DU recorder is among the top screen recorders for android that doesn’t show any ads. Moreover, it is full of amazing features such as limitless recording, video customization, GIF maker, front camera, and much more.

The only problem with the DU recorder is that it shows a watermark with all the videos in the free version, something that users don’t like.

Mobizen is an easy-to-use screen recorder that allows users to record any videos they want. Whether you are playing a game, want to record an app screen, or something else, it will work perfectly.

There is also the option for sharing your reactions using Facecam and editing the videos right away. However, the app supports ads and in-app purchases, making things hectic for users.

ADV is another screen recording app for android that is equipped with all essential features. It offers users to record videos, add text while recording, use both cameras, and even pause the recording if desired.

That makes it a great choice for recording reaction videos and gaming clips. Moreover, there is no root access required and neither are there any watermarks. ADV is free to download but supports ads and in-app purchases.

This a simple screen recording app that has all the essential features for screen recording. Users are allowed to record videos in a resolution ranging from 360p to 720p while the bit rate ranges from 2-10 Mbps.

Lollipop screen recorder also features a 60 seconds countdown option, allowing users to get set before the recording begins. But as mentioned earlier, this is a very basic and simple screen recorder and might not work for everyone.

OneShot is a simple yet very useful android screen recorder that is equipped with features such as resolution adjustments and voice recording.

That makes it great for creating tutorial videos, especially when you don’t have expertise in creating such content.

This app also includes an internal gallery where users can record and access videos instantly.

Rec is the last android screen recording application on our list which is pretty much basic and free.

Though there are no advanced features, this app is good for recording short HD videos. That is because the free version only allows users to capture videos of up to 5 minutes.

If you want to record longer videos, there is a premium version available as well. It costs about $8 and allows to capture videos of up to 1 hour.