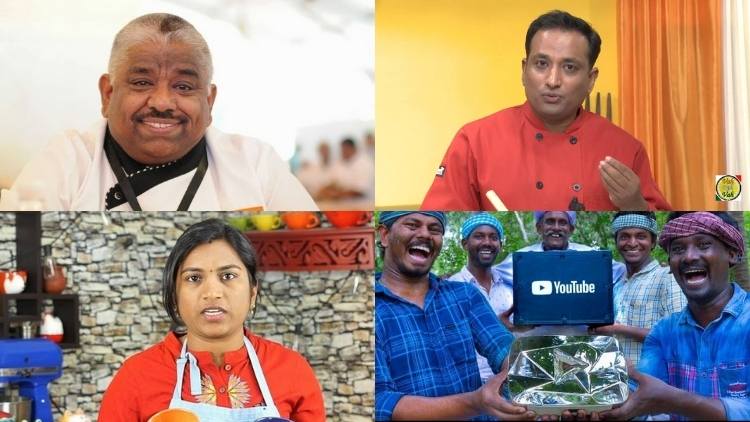 Want to make a delicious Masala Dosa but don’t know where to start? No Worries, you can easily check out the recipe on some amazing South Indian Cooking Channels. In this regard, Youtube has made life comparatively easy for us today. A live demo for a tasty dish is just a click away. Let us take a look at the top 15 South Indian cooking channels on Youtube.

Number 15 on this list is Gita’s Kitchen which has 565K Subscribers. The owner of this Youtube Channel regularly uploads videos on Indian cooking although her speciality is in South Indian Cooking. Apart from this, she also uploads videos on English speaking skills, Time Management, Parenting etc.

This channel is owned by celebrity chef Sanjay Thumma who is also known as Vahchef. Vahchef owns channels in different languages and he also makes different types of cuisines. But this channel is purely dedicated towards the Telugu audience. Vahchef makes some amazing dishes on this channel and also invites celebrities sometimes.

The 13th place on this list goes to Ambika Shetty’s Kitchen. This channel has 733K Subscribers. The Channel became famous for South Indian Dishes but has slowly expanded to cover recipes from all over India.

This channel is owned by renowned chef Dr. K Damodharan. Damodharan is best known for winning the Guinness World Record for the longest cooking marathon by a single individual in 2010. On his channel, he regularly uploads videos where he makes dishes from different cuisines. He also invites guest celebrities on his channel and cooks with them.

Number 8 on our list is Rekha Aduge. This channel has 1.86 million subscribers. This channel is mainly known for cuisine from Karnataka, although dishes from different cuisines are also uploaded. Rekha Aduge is also active on Facebook.

This channel is owned by Bhargavi Sankranti and has 2.2 million subscribers. The channel was launched in 2017. Bhargavi focuses on a variety of dishes like Snacks, Main Course, Breakfast, Sweets etc. Her cake-making videos have previously ranked number 1 on the Youtube Trending list. This is one of the most regular channels in terms of uploading videos.

This channel is owned by famous chef Venkatesh Bhat. It has 2.58 million subscribers. Venkatesh focuses mainly on South Indian cuisine but makes different types of dishes like Breakfast, Main Course, Sweets etc. Venkatesh had previously hosted the famous TV cooking show Samayal Samayal. He has also published his handbook online and has an active Facebook page as well.

Mini Foodkey is one of the most unique cooking channels on Youtube. They create videos of healthy food recipes in traditional style. They integrate stories and characters in the cooking recipe to make it interesting for the viewer. Mini Foodkey focuses on a variety of cuisines like Indian, Continental, Italian etc. but their speciality is South Indian.

The 3rd place on this list goes to Vismai Food. This channel has 2.97 million subscribers. Vismai Food is owned by Teja Parchuri. The channel was started in 2016. This channel is one of the most famous ones for Hyderabadi and South Indian cuisine. They demonstrate different types of dishes like Breakfast, Sweets, Seafood etc. Vismai Food is active on Facebook as well.

Madras Samayal is owned by Angela Steffi. This channel has 5.07 million subscribers. Steffi uploads videos of dishes from different cuisines but the language of communication is Tamil. This is one of the fastest-growing cooking channels on Youtube. Many subscribers of the channel love the dishes as well as the way of presentation in the videos.

Arguably one of the most famous cooking channels in India, Village Cooking Channel(VCC) is owned by a group of farmers. This channel has a whopping 14.7 million subscribers. They are mainly known for cooking unique dishes in large quantities in open fields. After the dishes are made, they are served to orphanages and old-age homes in their village. Congress leader Rahul Gandhi had also done a guest chef appearance on their channel. VCC was also the first Tamil Youtube channel to receive the Diamond creator award.