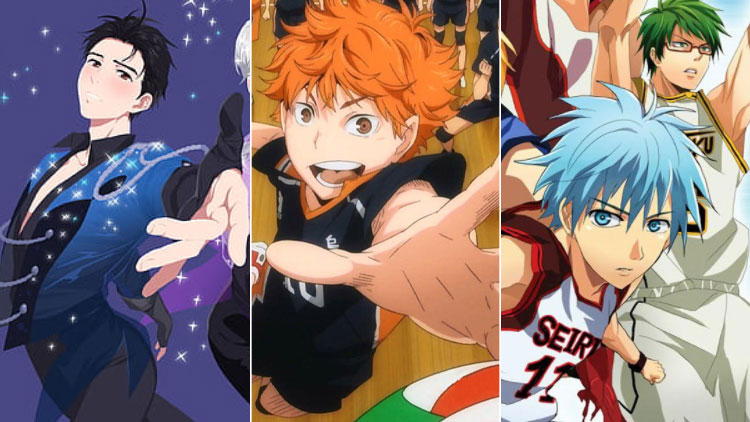 Sports and Anime are the two things that bring people together more than anything else. People from different parts of the world agree on the fact that they like the same anime or favourite sportsperson. So, I have curated a list of the 5 Best Sports Anime One Should Watch!! In 2021.

Haikyuu is the story of young Shouyou Hinata, who is inspired by the “Little Giant” of Karasuno High School Volleyball team. Hinata himself is a short heighted boy but has a great love for volleyball and tries to compete during his final year of middle school, where his team is obliterated. Going by the nickname “King of the Court” the prideful  Tobio Kageyama puts an end to Hinata’s middle school volleyball career.

Now in high school, Hinata has enrolled in Karasuno High where he is surprised by the current poor state of Karasuno’s volleyball team and to add more surprise he finds that Kageyama has also enrolled in Karasuno. The journey of Hinata and his new teammates begins here where the team works hard to become the strongest team in Japan and reclaim the glory of what Karasuno once used to be.

Taiga Kagami and Tetsuya Kuroko are the two new members at Seirin High School Team. They also work hard but now are confident to leave a mark in basketball world with the help of Kagami, who his tall, athletic and has most the potential in the team. But on the other hand, Kuroko is not much athletic and lacks any sort of presence. But there is more to Kuroko than what meets the eye. And thus Seirin High School Basketball team take their steps in becoming Japan’s top team, and taking on the challenges from strong teams all over Japan.

Tatara Fujita is a middle school student with extraordinarily little interest with his plans for the future. Being a little timid he tries to stay away from any sort of trouble full events but is found being harassed by bullies for money. He is saved by Kaname Sengoku who later invites him to his dance studio. Tatara despite not being motivated still decides to follow Kaname to his studio where he finds Shizuku Hanaoka, his classmate. Being captivated by Hanaoka’s performance while dancing with her Tatara begins to show some interest in competitive dancing.

Tatara finds his new passion as he enters into the world of competitive dancing, a world unknown to him till now. Tatara’s strong determination to face any challenge made this series to be a part of our 5 Best Sports Anime.

Haiji Kiyose, a resident in dormitory of Kansei university, runs into Kakeru Kurahara, a former ace runner of Sendai Josei High School. Finding out that Kakeru is also from Kansei university and is in need for some cheap place to live, Haiji invites him to Kansei dormitory known as Chikusei-sou.

Haiji later reveals that the dormitory belongs to the Track and Field Club of Kansei university and signing up for dormitory is equivalent to signing up for the club. Haiji also reveals his interest in running in Hakone Ekiden, one of the most prestigious marathon relay races of Japan.

Yuri Katsuki, Japan’s one of the most prominent figure skater, is defeated in World Grand Prix then returns home to plan for his future. He finds that his career as figure skater is seemingly going downhill. But to his surprise he finds one of his routine practice video has gone viral where he imitates the routine of five time world champion Victor Nikiforov. To add more, Victor Nikiforov comes to visit Yuri and offers him to become his coach. Yuri being a huge fan to Victor immediately accepts the offers.

But all the way in Russia Yuri Plisetsky is furious with Victor’s decision and works hard to defeat Yuri Katsuki and win back the tutelage of Victor.

Thanks for such a great article. I’ll do watch this anime.